‘My goal is for each concert to have something meaningful to say about the experience of survivorhood’
Oct 6, 2019 7:00 AM By: Jessica Kerr 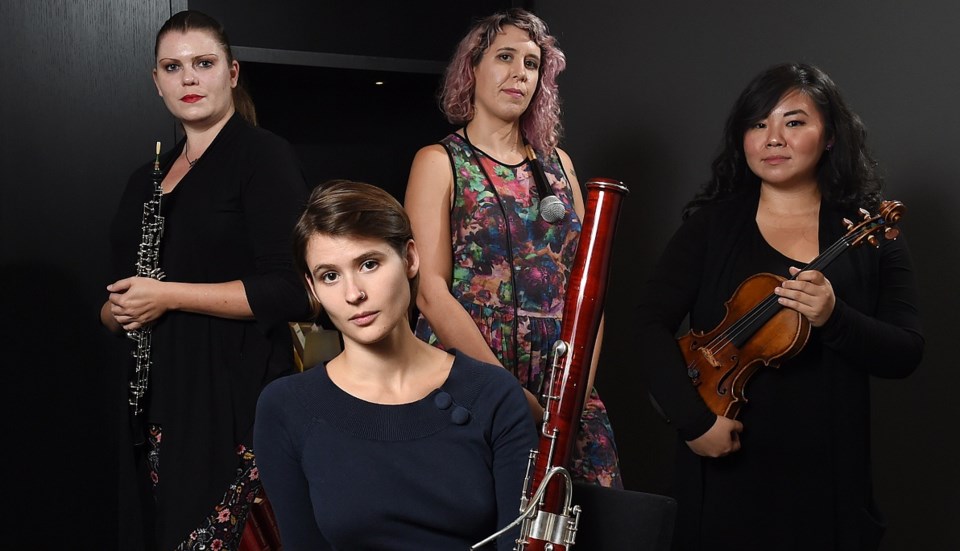 “My goal is for each concert to have something meaningful to say about the experience of survivorhood, or to communicate a message that matters,” says Katelin Coleman, founder of Artemis Musicians’ Society. “It doesn’t always have to be serious. I also think that just being on stage and out as who we are, that’s already quite a powerful message in and of itself. Survivors do normal stuff. Survivors ride bikes, watch television and go to parties. They do normal shit. They’re normal people.”

The group is named after Italian painter Artemisia Gentileschi, an Italian Baroque painter who was widely respected and sought-after in the 1600s. She was raped by another painter when she was 12 — he was charged and convicted after she testified against him in court — and much of her work depicted strong and suffering women from myths and the Bible.

“The subject of sexual violence is also visible — often in a coded way, of course — in much of her art, so she was making art through the lens of survivorhood many centuries before such a perspective would be considered allowable,” Coleman says.

The 29-year-old professional bassoonist put a call out on Facebook in January to form an ensemble comprised and run by musicians who have been the victim of sexual abuse or assault.

The post got well over 100 likes and comments, Coleman says, and she received about 30 messages from musicians from around the world who had also been sexually assaulted or abused at some point in their lives.

“I found it touching how many people wanted to share something about what had happened [to them],” she told the Courier.

“The responses that I got in writing were often quite cathartic and quite emotional and [brought] them some relief to see this happening.”

Coleman says the ensemble’s upcoming Oct. 15 performance, “On Loneliness,” explores the survivors’ journey from loneliness and isolation to togetherness and the power of community.

Coleman was sexually abused by a relative from a young age. She says she doesn’t remember exactly when it started, but her earliest clear memories of it are from around age 5. It was always disguised as play.

“I remember growing up as a kid and just feeling like I could never belong, somehow, for that reason,” she says. “No matter how well liked I was or how well I was doing or whatever, there was just this filth that would separate me from other people forever.”

She says she told her parents about the abuse when she was 10. It wasn’t happening anymore at that point and, Coleman says, and her parents’ response was to tell her that she hadn’t done anything wrong but she probably shouldn’t tell anyone else about it. It was never talked about again.

“It was this thing that… made me less human than other people,” she says, adding that having a role model, who had gone through the same thing, might have helped.

“The abuse was bad, but it was more the feeling of not belonging in the world because of it that was painful.”

At the same time, Coleman, who grew up in Burnaby, developed a love of music and excelled at it. She started playing saxophone in Grade 7, but by her senior year at Burnaby Central secondary, she had switched to bassoon at the urging of her band teacher.

“He talked up the bassoon like it was the coolest instrument,” she says.

After high school, she studied at McGill University where she completed a bachelor’s in bassoon performance and went to Europe, playing with several orchestras, including the Danish Radio National Symphony Orchestra, as well as the Odense Symphony Orchestra.

While working in Copenhagen, she says she was sexually assaulted by a fellow musician who started making unwanted advances about a month after she joined the orchestra.

Coleman says she immediately reported it to the orchestra, but nothing was done. When her contract expired at the end of 2015, she says, she was dropped from the orchestra with no communication. No one told Coleman her contract wasn’t being renewed; she heard through friends that she had been replaced by a less experienced man.

Her residency permit was attached to her employment so she was forced to return to Vancouver.

“Losing that [life] under those circumstances and coming back here and not really have much musical work, was just very, very traumatic,” Coleman says.

She questioned whether she should give up music and find a new career path, but found herself unable to let it go.

Their message was clear: “If this concert made you uncomfortable you should maybe think about your attitude because we’re here and we’re not going away and there’s nothing wrong with us,” Coleman says.

“Our primary goal is to fight back against the very real stigma — and resulting oppression — that surrounds survivors by wearing our survival publicly and with pride,” Coleman says. “Through positive representation, we believe we can both serve as role models for others still struggling in secrecy, and begin to shift the shame of sexual violence away from the survivor and onto the perpetrator.”

She has big ideas for the future of Artemis Musicians’ Society — she’d like to see the quartet take their act on the road, start an annual festival that attracts musicians from around the world, or establish an all-survivors orchestra.

In addition to helping others, Coleman says she has personally gained something from starting Artemis.