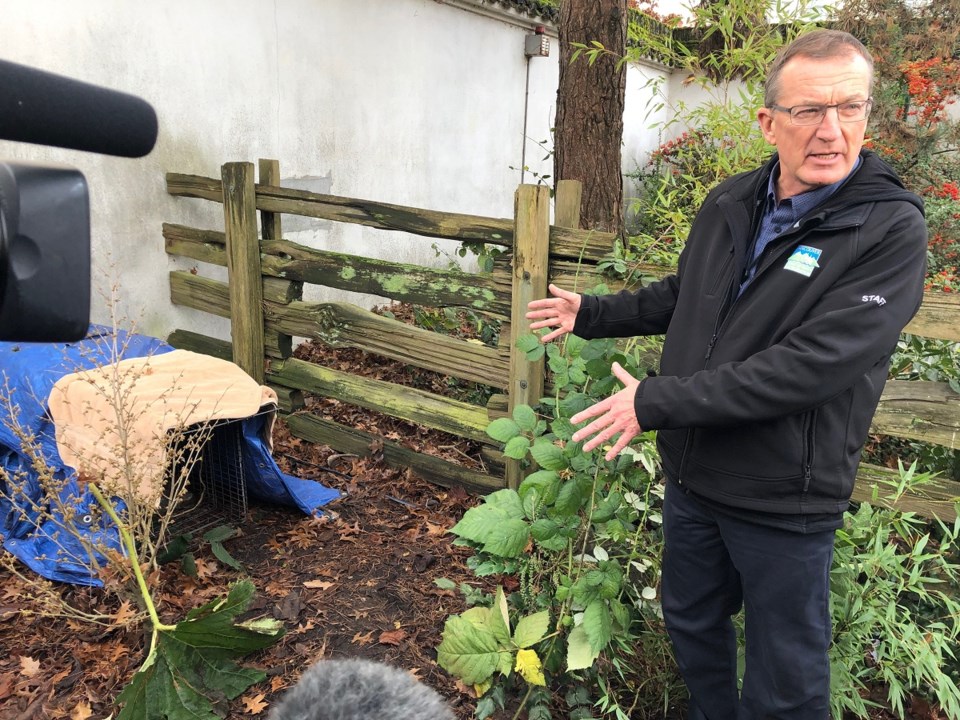 It’s a waiting game at Dr. Sun Yat-Sen Classical Chinese Garden as Vancouver Park Board staff is hoping to catch a rogue river otter that has been dining on the garden’s resident koi fish.

Howard Normann, director of parks, said Tuesday that the park board was first alerted to the presence of the otter on Sunday but the animal was spotted in Chinatown as early as last Thursday.

“It was spotted on the Andy Livingston playing field on Friday, but officially we got notice from the garden on Sunday that had an issue with the otter eating the koi, so we mobilized yesterday,” he said.  “We did an assessment this morning trying to figure out where or how the otter was coming into the garden and put out a trap and hopefully, without too much other damage here with the koi, we’ll be able to relocate the otter.”

Normann said that it’s believed the otter has eaten as many as five or six koi so far. The garden was home to 14 koi in total, including one named Madonna, who is a bit of a celebrity. The fish is more than 50 years old and has been living at Dr. Sun Yat-Sen for more than two decades.

“Everybody loves Madonna. It’s a bit of a mascot here,” Normann said, adding that “to the best of our knowledge” Madonna is still alive and well.

He said that it’s not unusual to see otters in the city but this is a first for Dr. Sun Yat-Sen.

“We have otters throughout our system Vanier Park, Stanley Park, Hinge Park… but in Sun Yat-Sen absolutely not. It’s such a unique facility in the middle of a city, particularly here you’ve got busy streets. How it got here, and survived, I don’t know. It’s a one off.”

He said it’s not known exactly how the otter got into the garden.

“No idea. The gates are accessible. These river otters, I understand, can climb trees. There are some drainage pipes coming and going from this pond system. It’s a large pond system as you can tell, there’s lots of little arms and nooks and crannies that have pipes, so possibly swimming through the storm sewer system… to be honest, no idea.”

Staff set up a covered box trap with fish oil and chicken to try and lure the otter into the trap and then relocate it to Stanley Park. The free part of the park is currently closed to the public.

“The actual garden itself on the private side is open,” Normann said. “People can pay to come in, they can stand there to hopefully get a glimpse of the otter, if that’s what they want do, but we’re just trying to keep it quiet and calm so the otter’s relaxed, will wander around the shore, smell the chicken or the fish oil and head into the trap.”

If the trap doesn’t work, Normann said staff will move to plan B.

“It’s a bit of a learning experience for us… this is interesting for us because our biodiversity strategy in the park board has been ‘Let’s re-wild, let’s get more wildlife back in the city.’ We have a beaver at Hinge Park, we have herring returning to False Creek so it’s kind of really a good news story but on the other hand we didn’t really expect this.”

He said that could mean moving all the koi to one area of the pond and closing it off, or temporarily removing the fish from the garden, which would take time and could be traumatic for the koi.