Commissioners voted in favour of asking organizers, council to find a ‘more appropriate location’
Feb 12, 2019 11:31 AM By: Jessica Kerr 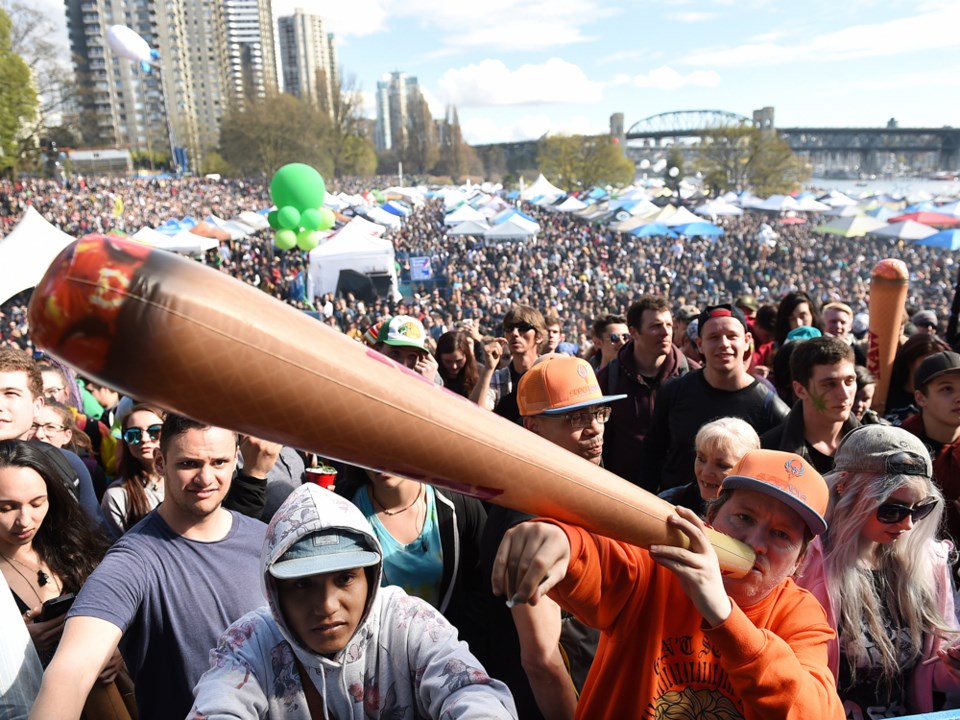 Vancouver Park Board commissioners were unanimous Monday night — they want to see the annual 4/20 pot protest move out of Sunset Beach.

“This motion for me is about respect,” said commissioner Tricia Barker, who introduced the motion directing staff to send a letter to city council, Mayor Kennedy Stewart and 4/20 organizers asking that they look into finding “a more appropriate location” for the event starting in 2020.

Barker said that in speaking to residents during last year’s election campaign she heard a lot of concerns around the annual event and the fact that the park board’s bylaw prohibits smoking in parks and on beaches.

She previously told the Courier that she has nothing against cannabis or the movement; it’s just about following the rules.

“For me it is a pretty simple premise — there’s no smoking in parks and we should actually go along with that.”

The rest of the park board commissioners agreed, unanimously approving most of the motion.

“I think the board has been very consistent that no smoking bylaw needs to be upheld,” said commissioner John Coupar.

“When you have a bylaw it needs to apply to everyone.”

Green commissioner Camil Dumont said that while he respects the event as a protest, he decided to vote in favour of looking for a new location.

“I understand that we have a right to protest in this country and I’m very glad for that. I will be supporting this motion but not because I didn’t think about it and think about it long and hard.”

Board chair Stuart Mackinnon said that in the 1970s he worked with a group that was pushing to reform the country’s marijuana laws.

“I support and have always supported the legalization of marijuana, cannabis... For me this has always been about the appropriateness of this protest at this location, or any location in Vancouver parks.”

Barker’s motion also asked staff to look at options to prohibit the sale of cannabis and related products at the event. General manager Malcolm Bromley told commissioners that that is outside of the park board’s jurisdiction.

However, that part of the motion passed in a 5-2 vote with commissioners John Irwin and Gwen Giesbrecht in opposition.

Bromley said that even though the event does not have a permit, staff will work with organizers to minimize any risk to participants, residents and the park.

“Over the last three years, since this event’s been at Sunset, we as part of an integrated team with engineering, transportation, fire, police, have worked with the organizers,”  he said. “We’ve made it clear to the organizers that we prefer that they’re not there, we actually send a letter of expectation saying, ‘Please don’t come here, please don’t smoke, you know our rules,’ but having said that if they’re going to come we want to minimize public risk… I think we’ve done a very good job of that, of mitigating risk, doing our best to avoid and personal or property harm.”

The annual event, which has been taking place in the city since 1995, moved to Sunset Beach from Vancouver Art Gallery in 2016.

Last week, 4/20 organizer Dana Larsen said that other locations have been considered but finding another suitable spot for an event of that size is difficult. An estimated 40,000 people attended last year’s event.

“In my opinion that’s one of the only other places in the city that would be suitable for something like this…” Larsen said. “We’re fine at Sunset Beach. It’s a great venue. If it was any other kind of event they’d be happy to give us a permit it’s really just bias and stigma against users that is the root of the issue here, in my opinion.”