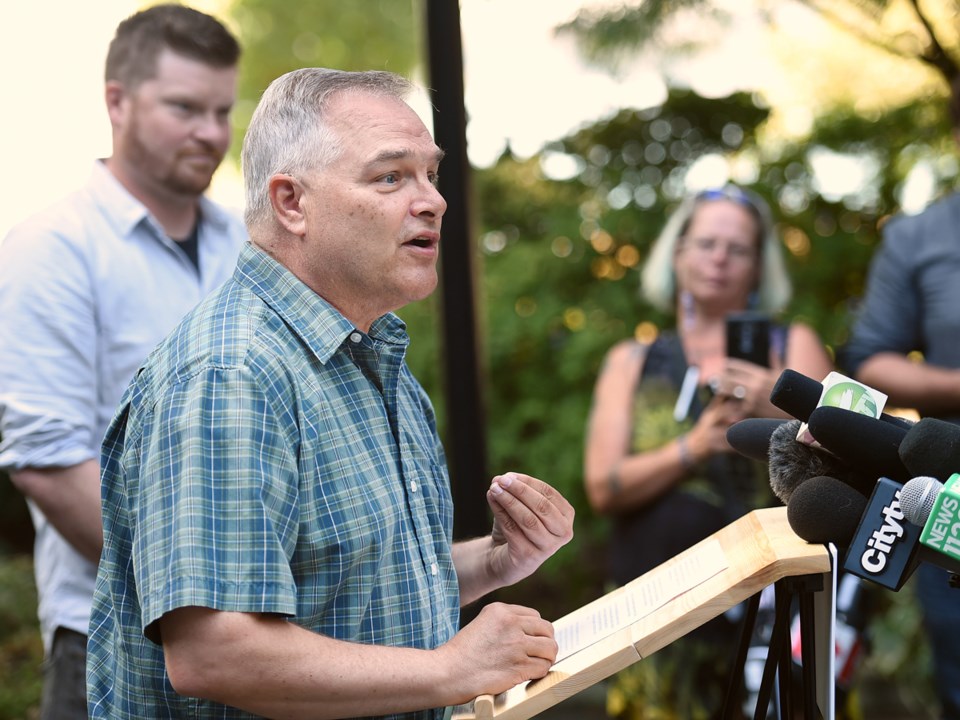 Park board chairperson Stuart Mackinnon said Friday the board will not seek an injunction to remove homeless people from Oppenheimer Park. Photo Dan Toulgoet

The chairperson of the elected seven-member Vancouver park board announced Friday that a court injunction will not be sought to remove the remaining homeless people and tents in Oppenheimer Park.

Stuart Mackinnon said a majority of park commissioners decided Thursday night not to seek the injunction despite a request from Malcolm Bromley, the general manager of the park board.

“We do not believe that seeking an injunction through the courts with the goal of clearing people from Oppenheimer Park will bring us any closer to a true solution,” Mackinnon told reporters outside the park board’s offices in Stanley Park.

“Simply removing people from Oppenheimer Park, which may force them onto the streets, back lanes and into other parks is not the solution.”

The better approach, he said, is for the city to create a multi-jurisdictional task force to address homelessness across Vancouver. In the meantime, he added, people will not be told by the park board to leave Oppenheimer.

“This is not just a problem for Oppenheimer Park,” he said.

“Homelessness is all of our problem. Housing is not within the mandate of the board of parks and recreation, so we ask the city, the province and the federal government to acknowledge this as a crisis and to act immediately.”

The park board’s decision came the day after Mayor Kennedy Stewart held a news conference to say he wanted the park board to temporarily cede jurisdiction of the park to the city.

Stewart suggested he had a plan in place for the people in the park – which he estimated at 40 – that could include seeking an injunction. But, he said, he first needed power transferred to the city.

Mackinnon said Friday the board had yet to receive a formal request from the mayor, although a news release issued by the board Wednesday quoted Mackinnon saying the board would consider the mayor’s request.

“While I have already made a personal request to park board chair Mackinnon to consider this request seriously and urgently, I have reiterated this request in writing to him. I again urge the park board to help us move forward by meeting before September 16 and voting on my request.”

The board’s rejection of Bromley’s request to seek an injunction was a clear signal the majority of park commissioners want to retain control of the park.

Commissioners Camil Dumont and John Irwin, who attended Friday’s news conference, said they wouldn’t support ceding control of the park to the city – as did Mackinnon.

Park commissioner John Coupar, who cast the lone vote for an injunction, said he was worried about the health and safety of campers, residents, emergency personnel and workers visiting the park to help people find housing.

His NPA colleague Tricia Barker was absent for Thursday night’s vote, with those voting in the majority to reject an injunction representing the Green and COPE civic parties.

“This is a dangerous precedent,” Coupar said. “I think our parks will soon be occupied across the city and I don’t think that’s what residents expect from their elected representatives in the park board.”

He said he was disappointed “the best the board can do” is to write a letter to the mayor and council requesting the creation of a task force.

In 2014, during the last encampment at Oppenheimer Park, the park board of the day successfully sought an injunction. Police, park rangers and city workers cleared the park and found housing for the majority of campers.

Five people were arrested but not charged.

Asked what the difference was this time around, Mackinnon said the city purchased a former hotel to house campers. That has not been done this time, he said.

In recent months, the city and B.C. Housing have found housing for more than 120 people and opened up shelter space for those people who want it.

Park board general manager Bromley also issued an order for campers to vacate but did not have the desired effect or legal teeth that an injunction would have.

COPE Coun. Jean Swanson spoke at Friday’s news conference and said the park board’s move to reject an injunction was an indication of another public body’s recognition of the homelessness crisis.

“This move by the park board and these truly lovely humans is saying, ‘We need everyone behind this,’” she said, noting the provincial and federal governments could do more to address homelessness in Vancouver.

The city’s homeless count in March found that more than 2,200 people were without a home, a record-breaking homeless population for Vancouver.