Vancouver photographer offers solace to those dealing with death

Grief Narratives website allows users to reflect on the end of days
Dec 21, 2019 7:00 AM By: John Kurucz 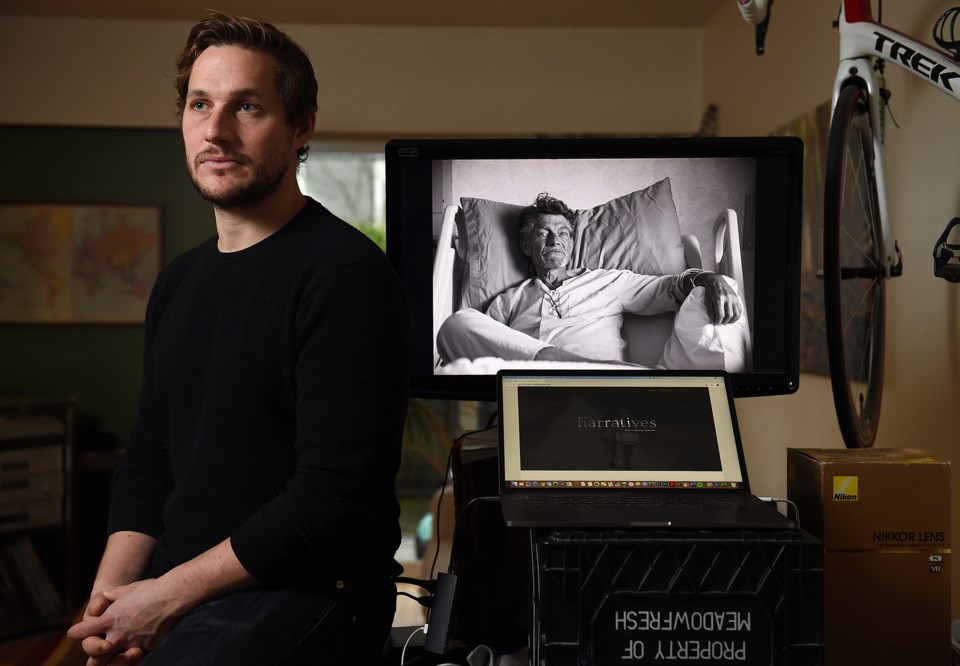 Josh Neufeld has a special affinity for turkey necks.

It’s not that they taste particularly good, nor were they a staple on his plate since childhood.

Neufeld’s late father Dietmar loved the neck. It was his go-to whenever turkey was served at a holiday meal.

Dietmar died in September 2015 after a brief battle with cancer.

Thanksgiving dinner that year was the first family gathering after Dietmar’s death.

“I sat in his spot and in his honour, I ate the whole neck and blubbered like a buffoon because it was like ‘OK, this is our life now,’” Josh recalled. “It’s four Christmases later, but still that feeling doesn’t change. It sucks.”

Outside of the culinary nod, Neufeld continues to pay tribute to his father in a manner that’s profoundly personal, yet completely universal.

Neufeld’s website Grief Narratives invites people the world over to share their photos, thoughts, feelings and emotions as they experience death in their own unique way.

The online platform has garnered interest across Europe and as far away as South Africa.

The site was born partly out of Neufeld’s experience photographing the end of his dad’s life, a project called Meeting Mortality.

Across roughly 30 photos, Neufeld documented the final 19 days of his father’s life in hospital.

“My dad never did see the photos, which really messes with my head,” said Neufeld, a professional photographer by trade.

Neufeld hatched the idea in the spring of 2015 upon visiting a dying relative in California. His uncle was simultaneously battling Parkinson’s disease and cancer and sat the roughly 50 family members down to prepare them for the end.

“You walk away from a conversation like that and you’re like, OK, that really realigns priorities and shifts perspective and helps you look at life a little differently,” Neufeld said.

Volunteering at a hospice was to be Neufeld’s next step but Dietmar fell ill before his son could find a volunteer placement.

Dietmar was diagnosed with pancreatic cancer on July 13 and died Sept. 9. He was 66. He was the department head of classical, near eastern and religious studies at UBC, an avid cyclist and loved taking the piss.

“Him and I would spend hours out by the fire chatting,” Neufeld recalled. “He could go deep about anything religious and he taught ancient Greek language. But then he could also sit there and shoot the shit about the most meaningless, stupid stuff.”

Documenting the end was done so with his Dietmar’s blessing. He also came up with the name “Meeting Mortality.” Neufeld discussed the idea with his mom and three sisters and got buy-in, though not totally.

“My oldest sister doesn’t really like to look at those photos,” Neufeld said. “But I think they just understood where it was coming from.”

Neufeld has since gone on to photograph the end of days for other families. Last year, he interviewed 22 people about their experiences confronting mortality, taking photos as they spoke.

He hopes to expand Grief Narratives into a multi-media platform where users can pay tribute to loved ones via text, photos, video and other media.

It’s a project not necessarily intended to normalize death, but to give community and a space to reflect for those who need it.

“I hope it becomes something people use and find value in,” he said. “I’m trying to show people that it’s an option. It’s not going to be for everyone.”

Neufeld’s work can be seen online at griefnarratives.com and joshneufeldphotography.com.