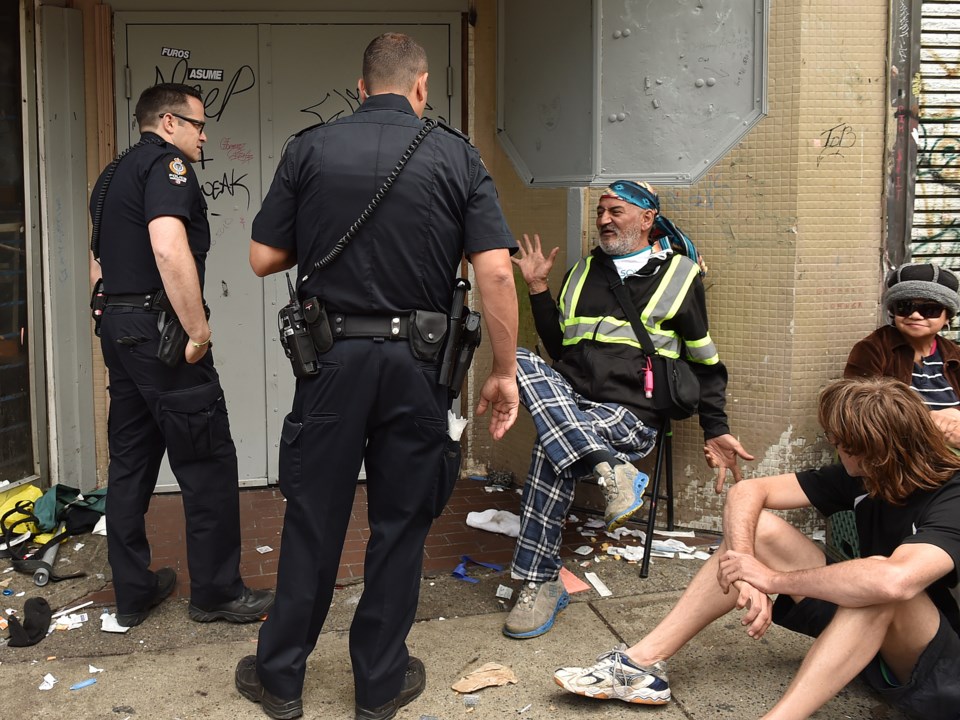 Vancouver police, seen here during the closure of the Balmoral Hotel last year, are accused of creating barriers for drug users to access overdose prevention sites in the Downtown Eastside. Photo Dan Toulgoet

Palmer said there is no other police department in North America that is more open to health care approaches to drug use than the VPD, despite the findings of the study authored by researchers at the University of B.C. and the B.C. Centre for Substance Use.

“We are big supporters of the four pillars [drug strategy],” he told reporters Thursday following a Vancouver Police Board meeting in which a deputy chief spoke to a separate issue of the escalating violence and drug activity at the tent-occupied Oppenheimer Park.

The chief said he hadn't read the entire study, but had reviewed a three-page briefing document prepared by his department.

“It’s kind of ironic that we were standing here today talking about violence in the Downtown Eastside and Oppenheimer Park," he said. "This report is just really one micro-focused issue.”

The study, which was published in the International Journal of Drug Policy, outlined a series of concerns based on more than 200 hours of research in and around overdose prevention sites and interviews with 72 drug users.

The majority of participants described having negative interactions with police in the neighbourhood, which created a lack of trust between them and officers, the study said.

“Such interactions were linked to participants’ structural vulnerability – including being harassed while using [drugs] outside, being forcefully displaced while sleeping outside, and having tents, tarps and other belongings disposed of while unhoused – and reinforced their marginality and drug-related risks,” the study said.

Study authors recommended the VPD reduce car and foot patrols in the Downtown Eastside and stay away from areas around overdose prevention sites, which are equipped with clean supplies and people on hand to intervene in an overdose.

They also want police to stop the enforcement of court-ordered restrictions that prevent people from returning to an area – where previously arrested – that has an overdose prevention site.

Palmer pointed again to the violence at Oppenheimer Park in his response to the recommendations of fewer patrols.

“We have to be concerned about all the public safety issues, not just that one very specific issue that the report looked at,” said the chief, noting he was disappointed the department wasn’t consulted in the study, but has since scheduled a meeting with the authors.

The Downtown Eastside is the epicentre of the overdose drug death crisis in Canada. In Vancouver last year, 389 people died of a drug overdose.

The B.C. Centre for Disease Control, using data from 2015, estimated the number of injection drug users in Vancouver at 8,500 people, many of whom reside in the Downtown Eastside.

The VPD has a policy where it doesn’t attend overdose calls unless one occurs in plain view of an officer or an officer is requested to accompany other emergency personnel, including paramedics.

VPD officers are equipped with the overdose-reversing drug naloxone in spray form, and have used it to revive victims of an overdose.

Given the heavy police presence in the Downtown Eastside neighbourhood, the report said, there remains an “ongoing risk” of police being at the scene of an overdose.

“In these cases, we recommend police not get involved – including, not running warrants, arresting, or searching individuals – unless it is to administer naloxone,” the report said.

The report points to one case where an officer accompanied a paramedic on a call inside an overdose prevention site.

“While the officer’s assistance was requested by the paramedic, individuals accessing the service were visibly surprised and unsettled by the presence of law enforcement within a space they viewed as safe from arrest,” the report said.

“Such remaking of space by the officer and the paramedic reinforced fears of arrest from the majority of those present, including individuals who were breaching area restrictions to access the service.”

The report ties its concerns about policing strategies to gentrification of the Downtown Eastside, citing complaints from “condo-owning residents, visitors and businesses” as reasons for an increase in policing.

“The Downtown Eastside is experiencing an influx of high-end condominiums whose placement overlaps with the main economies of the drug scene,” the report said.

“Such gentrification efforts have also been paired with mechanisms of urban control, including private security guards, security cameras, and local policing.”

Palmer said the department has supported the city’s four pillars drug strategy – harm reduction, prevention, treatment and enforcement – since the Insite supervised injection site opened near Main and Hastings in 2003

He also noted police don’t arrest people for simple drug possession unless it’s tied to another event. The study, in fact, shows drug charges have dropped in Vancouver from 5,183 in 2006 to 1,629 in 2017.

One of the authors of the study – the B.C. Centre on Substance Abuse – recommended in February that “heroin compassion clubs” be set up in Vancouver and across the province to reduce the mounting number of overdose deaths.

Such a model would allow a heroin user to join what would most likely be a non-profit organization to buy medical grade heroin instead of relying on fentanyl-laced heroin from the streets.

Health Canada told the Courier in an email in February that the centre’s recommendation for compassion clubs would be considered as part of the larger work of studying “medication-assisted treatments as an alternative to toxic street drugs.”