Vancouver police department added to its ranks Friday as 15 new recruits were sworn in. The new group of officers includes six women and officers from a variety of different backgrounds.
Jan 12, 2018 8:00 PM By: Courier Staff 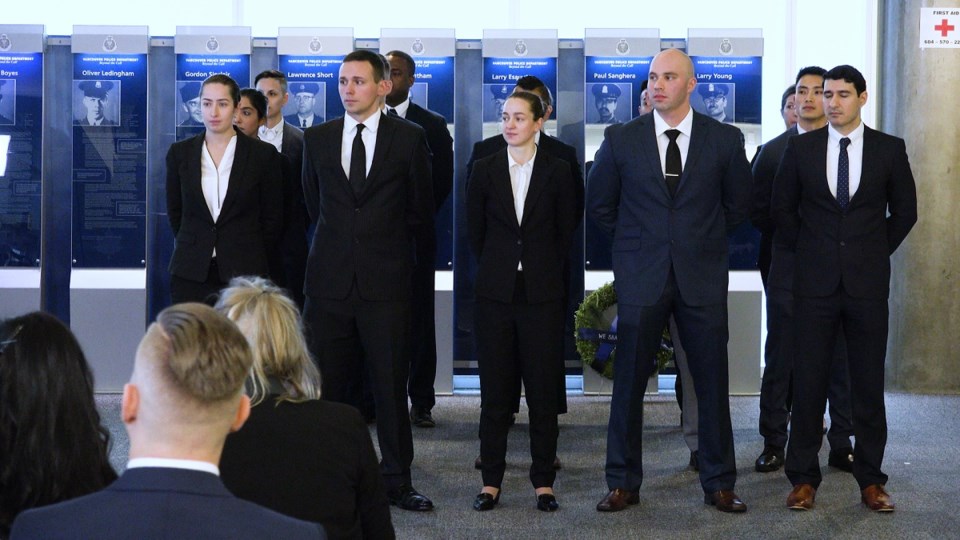 Vancouver police department added to its ranks Friday as 15 new recruits were sworn in.

The new group of officers includes six women and officers from a variety of different backgrounds. The addition of the new recruits brings the department’s complement to 1,485.

Meet the department’s newest officers patrolling the streets of Vancouver.

Battle was born in Vancouver and raised in Richmond. She graduated from Little Flower Academy in 2009 and went on to study kinesiology at Langara College and the University of B.C. Her love of soccer inspired her to become an accomplished soccer official, and she has refereed both nationally and internationally. Battle has worked in the fitness industry, in customer service, and as a coach. Her desire to pursue policing came when she worked as a student border service officer with the Canada Border Services Agency. In 2015, Mary Katherine was hired as a Jail Guard with the VPD. She continues to dedicate countless hours volunteering as both a soccer coach and mentoring referees in the game of soccer.

Birkett was born in Burnaby and raised in East Vancouver. His interest in policing started when he participated in the VPD Student Challenge and the RCMP’s Encounters with Canada. He graduated from Templeton Secondary and later studied criminology at Langara College. He gained valuable police-related experience working as a loss prevention officer and as a VPD Tactical Training Centre role player. In 2012, Birkett completed his training for the BC Sheriff Service, and he received his Associates Certificate in Training and Facilitation from the Justice Institute of B.C. (JIBC), and is currently an instructor for Sheriff Recruit Training and Firearms. He volunteers with the Big Brothers Program, VPD Citizens’ Crime Watch, Wishes without Borders Charity Toy Drive, and he is a member of the BC Sheriff Ceremonial Unit.

Born and raised in Vancouver, Bland graduated from Little Flower Academy in 2010 earning an academic scholarship to the University of Guelph. She later transferred to UBC to study natural resources conservation in forestry and obtained a bachelor of science degree in 2015. Bland is an accomplished varsity field hockey player and has won provincial and national championships. During university she worked for the Canadian Coast Guard’s inshore rescue boat program as a member of a search and rescue team, and she recently worked as a Special Municipal Constable with the VPD.

Hamze was born in Burnaby and raised in Pitt Meadows where he developed a passion for sports and played competitive basketball, soccer and rugby. By the time he graduated from Pitt Meadows Secondary in 2005, he had also completed the New Westminster Police Junior Police Academy and was voted class valedictorian. Hamze pursued his interest in policing by working full-time as a loss prevention officer, while studying criminology at Douglas College. In 2011 he was hired as a correctional officer at Burnaby Youth Custody centre and received training at the JIBC. He graduated from Dougplas College in 2013 with a criminology diploma while working full-time as the programs officer at Burnaby Youth Custody centre.

Italia was born in Hong Kong and moved to Burnaby with his family when he was 10 years old. He graduated from St. Thomas More Collegiate in 2001, and enrolled at Simon Fraser University, where he developed a passion for criminology. Prior to completing his bachelor of arts in 2007, Italia obtained a practicum placement with the VPD in the planning and research unit. He continued his career working as a fleet attendant, jail guard and fingerprint technician, until he became a supervisor in the public service unit. He is fluent in Gujarati.

Jaswal was born in Ludhiana, Punjab, India and raised in South Vancouver. She graduated from John Oliver Secondary where she participated in soccer, basketball, and field hockey. Jaswal obtained a diploma in kinesiology from Langara College while continuing to develop her skills and relevant work experience as a loss prevention officer. She volunteered with the South Vancouver Community Policing Centre, the Kalsa Diwan Society, and the Vancouver Police Citizens’ Crime Watch. She went on to complete her bachelor of kinesiology at UBC and she is fluent in Punjabi.

Born in New Westminster and raised in Rossland, Johre graduated from Rossland Secondary School in 2008. He received a diploma in criminology from Douglas College before going on to complete a bachelor of arts in criminology at Simon Fraser University. After completing his studies, Johre traveled for a year, exploring many countries around the world. He was an active volunteer firefighter with the Rossland Volunteer Fire Department. He has also been working as a youth care counsellor with Spectrum Learning Centre and working as a bartender.

Born in Edmonton, Lau was raised in Hong Kong and Port Coquitlam. His interest in policing began when he attended the RCMP Youth Academy. Lau graduated from Terry Fox Secondary and obtained a criminology diploma at Douglas College. He gained valuable police-related experience as a loss prevention officer, a military police reservist, and a fleet services attendant. Lau is proficient in Cantonese and excited to start his new career as a Vancouver police constable.

Lebel was born in Lakefield, Quebec, and moved to B.C. when he was eight years old. Throughout school, Lebel was a standout football player with a passion for the game. In 2007, he graduated from Pinetree Secondary, where he won the Athletic Honour Roll Award four years running. Following high school, he attended Vanier College in Montreal, where in his first season his team won the CEGEP Championship. Lebel was recruited to play football for the University of Manitoba while he pursued his studies. He moved back to B.C. in 2010 and started work at a local recycling company, securing positions as senior truck operator and accounts manager. Lebel has been a volunteer football coach for many years and spent two years as a volunteer firefighter. He is fluent in French.

Lee was born in Hong Kong and raised in Burnaby. As a youth, he excelled in soccer and was voted by his team as most valuable player and most sportsmanlike. He graduated from Burnaby South Secondary, and obtained diplomas in financial planning with distinction from BCIT and hospitality management from Vancouver Community College. Lee has volunteered with the Kerrisdale-Oakridge-Marpole and Collingwood community Policing Centres. In 2016, he was hired as a Special Municipal Constable with the VPD. Nicholas speaks Cantonese.

Popil was born in Saskatoon and raised in Prince Albert, Saskatchewan as a member of the Lake Cree Nation Band. She graduated from Lethbridge College in 2008 with a diploma in criminal justice and policing. Popil moved to Vancouver in 2012 where she started work as a loss prevention officer. In 2016, she was hired as a VPD Special Municipal Constable and has worked in the jail, in community safety and in traffic authority. She has volunteered at Coast Mental Health – Watson House as an activity coordinator, working with residents living with mild to moderate mental illness.

Scarlett was born in May Pen, Jamaica, and raised in Clarendon. He developed a passion for soccer at a young age and excelled at the sport. In 2009, he immigrated to Vancouver with his parents and siblings. He embarked on a two-year church mission in Alberta before returning to Vancouver and has worked in in the maintenance, manufacturing, global logistics and retail industries. He graduated with honours from the Law Enforcement Studies diploma program through the JIBC. Scarlett has been volunteering as a role player at the police academy, and as a citizen’s community safety specialist with the Surrey Crime Prevention Society. He is fluent in Jamaican Patois.

Stukel was born in New Westminster and raised in Surrey. She graduated from Johnston Heights Secondary School with honours and enrolled in the Criminology Program at SFU. In 2016 she graduated with a certificate in police studies and a bachelor of arts degree with a major in criminology. Since 2010, she has been worked in the restaurant industry and is an active volunteer with both the South Vancouver and Ross Street community policing centres. She is fluent in Slovenian.

Born and raised in Burnaby, Tran graduated from Burnaby South Secondary and obtained his degree in criminology and a certificate in police studies from SFU. He worked in the loss prevention field and received two consecutive Chief Constable’s Commendation letters for his work. He recently worked with the VPD’s traffic authority and volunteered with the Collingwood Community Policing Centre and Citizens’ Crime Watch. Tran speaks Cambodian.

Venema was born in Richmond and graduated from Surrey’s from Earl Marriott Secondary before beginning her studies at Acadia University in Nova Scotia. She began with a double major in environmental science and geology, but soon transferred to psychology and Spanish. In her fourth year of university, Venema travelled to Spain and became a co-op/working student, studying Spanish and working at an elementary school teaching English. After university she was part of a team of students that made a humanitarian trip to the Middle East. After returning to Canada, Venema travelled to Quebec and studied French in a language immersion program for five weeks. She is fluent in both French and Spanish.