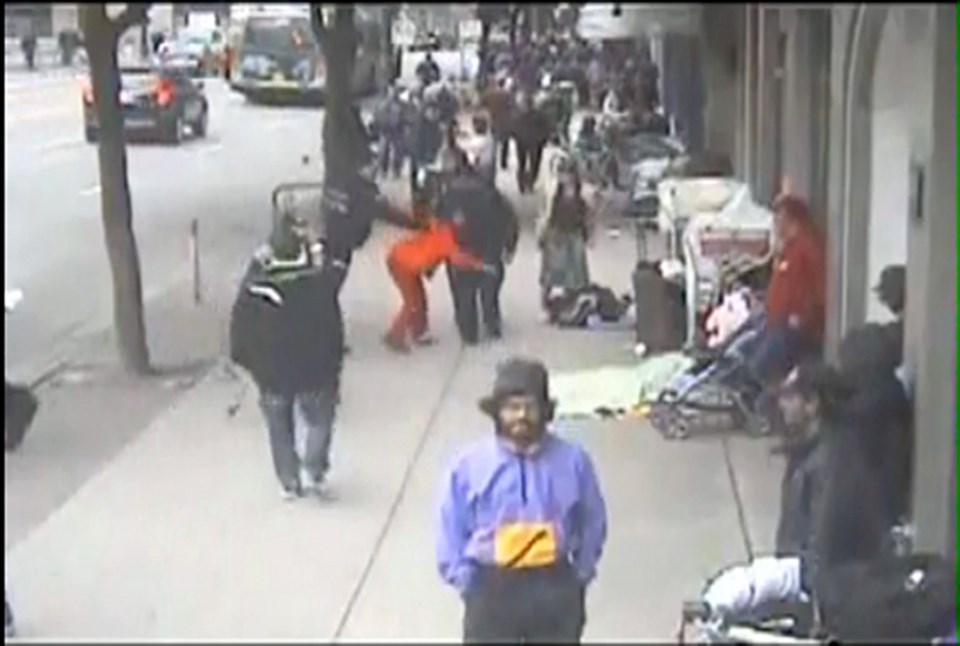 Police Complaint Commissioner Stan Lowe has ordered a public hearing into the case of a Vancouver cop shoving a woman with cerebral palsy to the ground in the Downtown Eastside in June 2010. photo: screengrab

The Police Complaint Commissioner has slammed the Vancouver Police Department for the way it handled its internal discipline proceedings into an officer who shoved a woman with cerebral palsy to the ground in the Downtown Eastside.

In a report released Wednesday, Commissioner Stan Lowe said the “accountability of the proceedings and the search for the truth were significantly compromised” in the case involving Const. Taylor Robinson and Sandy Davidsen.

Lowe has ordered a public hearing into the incident.

Davidsen, who also suffers from multiple sclerosis, was on a sidewalk in the Downtown Eastside June 9, 2010 when a video camera from a hotel captured Robinson shoving her to the ground. Robinson said he believed Davidsen was going for his gun.

Robinson was charged with assault but the charges were stayed after he agreed to an alternative measures program. He was transferred out of the Downtown Eastside and the department recommended a one-day suspension without pay.

The police complaint commissioner was not satisfied with the penalty issued from the police department and ordered a discipline hearing, which was met with an 11-month delay.

It wasn’t until Oct. 7 of this year that VPD Supt. Andy Hobbs, who was designated the department’s discipline authority, proposed Robinson receive a two-day suspension for allegations of abuse of authority and neglect of duty.

“A delay of 11 months to conduct a one-day discipline proceeding and a further three months to issue a decision on discipline was entirely unnecessary and unacceptable,” Lowe said. “I am troubled by the lack of accountability and fairness observed in the discipline process in this matter.”

Lowe pointed out Hobbs was “clearly critical of the investigation into this matter” but did not take steps “to direct further investigation to remedy his concerns.” Instead, Lowe said, Hobbs did his own investigation of the New Westminster police officer, which was “completely outside the jurisdiction of the proceeding.”

Lawyer Douglas King of Pivot Legal Society, whose colleague Scott Bernstein is acting on behalf of Davidsen but was unavailable Wednesday, said Lowe’s report confirms why police should not be investigating themselves.

“It’s kind of a textbook case for why police departments should not be investigating their own members,” said King, whose society welcomes the public hearing. “It turned into a bit of a farce, to be honest.”

Const. Brian Montague, a VPD media liaison officer, said the department will not comment on the case until after the public hearing is completed. Montague confirmed Robinson is still working at the department.

In October 2012, the B.C. Human Rights Tribunal decided to grant Davidsen a hearing into the incident. But since that decision, King said, Davidsen and the City of Vancouver agreed to an out-of-court financial settlement that nullified the hearing and lawsuit brought on by Pivot.

Documents filed with the human rights tribunal included an apology from Robinson to Davidsen in which he explained why he shoved her to the ground.

“The reason that I used the amount of force in which I did against you was because I thought at the time you were attempting to reach for my firearm," Robinson wrote. "As police officers we go through rigorous training when dealing with our firearms. The actions that I took were purely instinctual when I felt my firearm was being targeted. The force in itself is something that I regret using but it is what I did afterwards that makes me most sorrowful."

He added: "I am not going to try to make excuses for what I did because all attempts would fall short. I made a mistake and if it were possible to go back and do it over again, I would not have walked away from you while you were lying there."