It’s welcome news to some in the neighbourhood. Vancouver police announced Tuesday morning that the department is increasing the number of officers patrolling the Downtown Eastside. Media relations officer Sgt.
Jan 31, 2018 11:03 AM By: Jessica Kerr 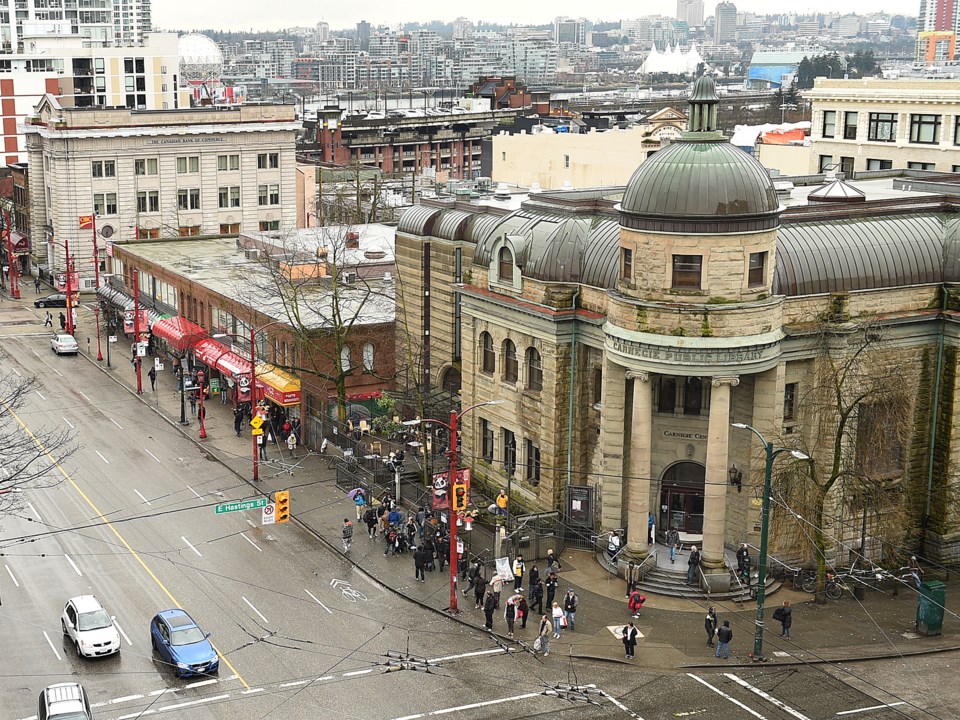 Vancouver police announced this week the department will be increasing the number of officers patrolling the Downtown Eastside. Photo Dan Toulgoet

It’s welcome news to some in the neighbourhood.

Vancouver police announced Tuesday morning that the department is increasing the number of officers patrolling the Downtown Eastside.

“In recent months, there has been a significant increase in street disorder, including violent altercations, which has led to heightened concerns from the elderly, people with mobility issues, and businesses,” he said. “We are working with the community to try to make the neighbourhood safer for everyone.”

Robillard added that officers have noted a “considerable spike” in street disorder in recent months and that “vulnerable people are being taken advantage of by others coming in from outside of Vancouver to commit crimes, like dealing drugs and selling stolen goods.”

Landon Hoyt, executive director of Hastings Crossing, one of the business improvement associations in the Downtown Eastside, said the organization has noticed an increase in challenges in the neighbourhood in recent months. The association has a safety committee that includes businesses, Vancouver police, city staff and Vancouver Coastal Health. He said part of the monthly meetings is used to discuss issues in the neighbourhood.

“There have definitely been challenges with street disorder and some of that is crowding on the sidewalks and it being difficult to walk through as an average person,” Hoyt said. “More violent related things like break-ins, fights, stabbings, do happen but not as frequently.

“It’s worse in the summer, as you can imagine with the weather being nice, but I think this year in particular it’s been more challenging in the winter as well.”

“They check in with our businesses on a bi-weekly basis and follow up with crime reports and provide advice and things like that but they’re not police and they’re not first responders. They can only do so much,” he said. “We have to try to keep up as much as possible and our teams have been really stressed and taxed with trying to keep up.”

The initiative is already had an impact, Robillard said. On Sunday, officers had made 10 arrests and seized $4,500 worth of drugs, including fentanyl, cocaine and meth, and $3,000 worth of stolen property.

Not everyone in the Downtown Eastside is happy with the move to increase the police presence in the area.

“Definitely we don’t see it as a good thing,” said Lenée Son, coordinator of the Carnegie Community Action Project.

She said more police in the area means the potential for more violence against the neighbourhood’s marginalized population, adding that segment of the community is often forgotten when it comes to public safety.

The organization has been pushing for the city to take money that would be invested in police initiatives and put it into things like social housing, such as the project at 58 West Hastings approved by council Tuesday, at shelter rates.

Last year, the association asked city council to reject spending more than $420,000 to open a community policing centre in Strathcona and boost funding to 10 existing centres. The money was later approved as part of a $3.5 million package of city initiatives to combat the drug overdose crisis in the city.

“That’s far more needed than more police,” she said. “People are dying because they don’t have housing.

“What people really need is housing and housing at 100 per cent shelter rates.”

Hoyt said the association acknowledges the need to work with the residents in the neighbourhood.

“We recognize that we’re in the Downtown Eastside and that there are these challenges and there’s this low income population that is here and we have to recognize that and work with them to provide what’s needed in the community,” he said. “It’s sensitive and we recognize that and this isn’t coming from a heavy handed, authoritative approach. It’s really meant to be picking up where things have been lost.”