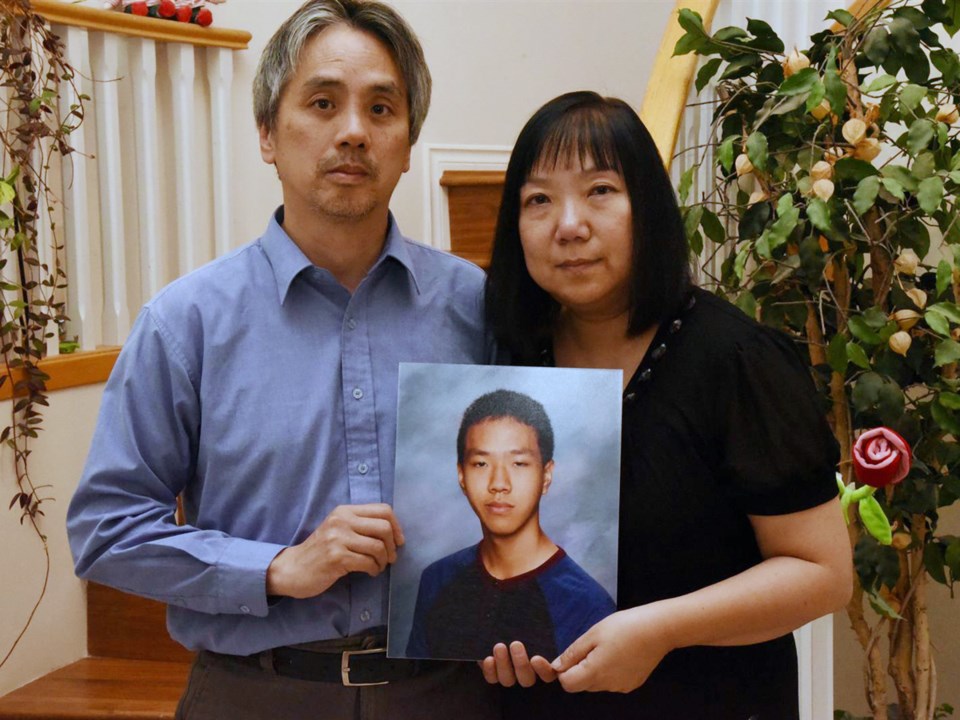 Samson and Chelly Wong are making a plea for information in the 2018 shooting that killed their 15-year-old son Alfred. Photo courtesy Vancouver Police Department

Vancouver police and the family of a Coquitlam teen killed in a brazen shooting in 2018 have renewed the plea for information in the case.

“I am pleased with how the investigation is progressing, but we know there are people who have critical information who have refused to provide investigators with that information,” said Staff Sgt. Mike Heard, who is leading the team of detectives investigating the shooting.

“We are making an appeal to these people to do the right thing and speak with us. Their information could help form important evidence that will make a significant difference in how this investigation plays out.”

On Jan. 13, 2018, 15-year-old Alfred Wong was in a car with his parents driving east on Broadway near Ontario Street at around 9 p.m. when shots rang out. Wong died two days later in hospital. Twenty-three-year-old Kevin Whiteside, who police believe was the intended target, was also killed.

“We know nothing can be done to bring Alfred back, but we think he deserves justice for his tragic death and we desperately want to know what happened that night,” said Chelly Wong, Alfred’s mother.

“Without your help, the police may not be able to arrest the killer, and our son will not be able to lay in rest. We ask for your help in giving closure to our grief,” she said. “Please help us ensure the person responsible for killing our son is held accountable. We will forever be grateful for your help.”

Earlier this year, on the one-year anniversary of the shooting, Vancouver police released new information about the case.

Investigators believe Whiteside was in the area to allegedly kill 28-year-old Matthew Navas-Rivas, who was at Indochine restaurant, on the corner of Broadway and Ontario Street, that night with a female companion. As the pair left the restaurant, Whiteside started shooting and an unidentified second shooter returned gunfire.

Navas-Rivas got away unharmed that night but was gunned down in an unrelated incident in July 2018.