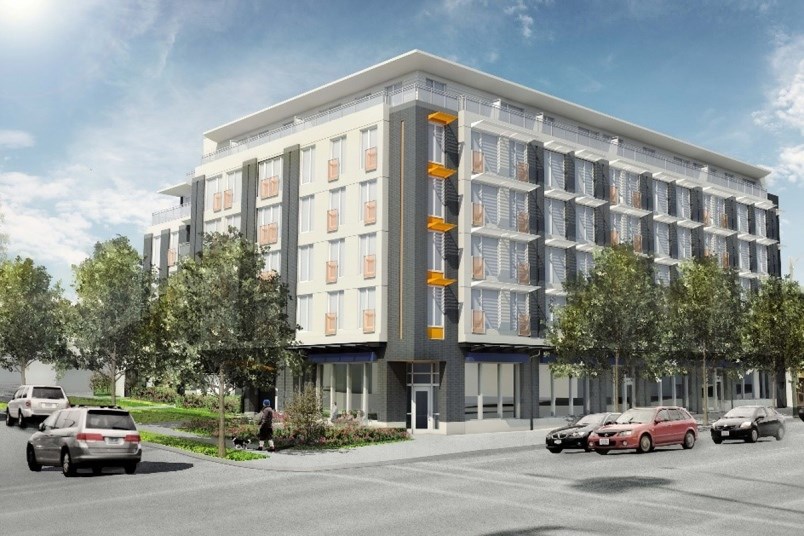 The Heights in East Vancouver is the country’s largest complex that’s built to Passive House standards.

Passive House is an international standard for energy efficiency, which focuses on energy used to heat a home by creating an airtight structure, having high-quality windows, super-insulation and good ventilation.

The Courier profiled The Heights in 2016. Read about it here.

In a press release, Robertson stated: “It’s incredibly exciting to open The Heights, a shining example of how the private sector can help Vancouver create housing and reach our goal of becoming the greenest city in the world, one building at a time.”

It’s anticipated that residents’ annual heating energy bill will be one tenth of the average annual cost for a conventional homes of the same size.

“Our goal at Eighth Avenue is to be among the leaders developing the world’s most innovative, high-performance residential buildings,” Ed Kolic, principal of the Eighth Avenue Development Group, said in the same press release. “With The Heights, we’ve brought that to this East Vancouver community — a premium sustainable building that’s healthier, quieter, simpler to operate and uses less energy to heat than any other form of standard building.”

Today is the opening of The Heights—a 85-unit rental project built to highly-sustainable Passive House standards. This #greenbuilding is one of North America's largest Passive House buildings & provides much needed market rental housing in an ultra-low-energy building form. pic.twitter.com/5Auu7GuWMW

The Heights is among a growing number of buildings aiming to meet the Passive House standard. According to the city, 34 Passive House projects, featuring a total of 1,010 dwelling units, have been approved or are in the process of being approved in Vancouver. There are another 26 projects, which feature 630 dwelling units, in the works, which may or may not proceed to applications.

While “The Heights” is currently the largest Passive House project in Canada, it may not be for long.

The proposal is at the rezoning application stage but, if approved, the condos would be among the world’s tallest Passive House towers. Frank O’Brien from Western Investor outlined that project, and the challenges it faces, in October 2017. Read about it here.

The Passive House approach is also being used for much smaller buildings in Vancouver, including a recently built home, as well as a multi-family home, in East Vancouver.

Meanwhile, construction on a cohousing project in the Riley Park neighbourhood, which is being built to meet Passive House standards, is expected to start in April, while a rezoning application is in the works for a “cohousing lite” complex at the corner of Main Street and Ontario Place that also proposes to meet the Passive House standard. (Stories about those projects can be found here and here.)

Buildings are the largest source of emissions in Vancouver, according to the City of Vancouver, producing more than half of the city’s total emissions in 2014. The city says Passive House design, and other net-zero or green buildings, will help it meet its zero-emissions target for new buildings by 2030.

The city's zero-emission building plan went to council in July 2016. That plan outlined steps to make the targets. The first step in the plan was a rezoning bylaw that council approved in November 2016, followed by building code updates focusing on energy efficiency, which came into effect May 1 of last year.