Eliminating Vancouver's athletic coordinator will have a "phenomenal" impact on thousands of children and teens at 119 public schools.
Apr 9, 2014 6:17 PM By: Megan Stewart 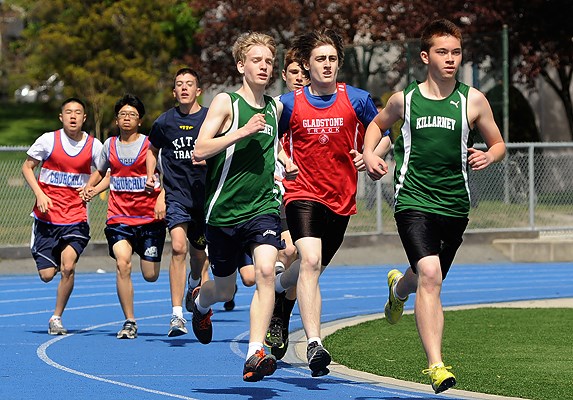 Public school athletes compete in a track meet in May 2013. Budget cuts could force the Vancouver School Board to eliminate the position of the district-wide athletic coordinator.Dan Toulgoet

Public school coaches fear for the future of their sports programs if the Vancouver School Board eliminates a district-wide athletic coordinator who organizes seasonal leagues, schedules fields and officials, and runs city championships for thousands of high school student-athletes.

“In a day and age when we're trying to keep kids fit and active, how can the VSB think of doing this,” asked Lord Byng teacher and rugby coach Ian MacPhee.

To account for a $26.6 million shortfall projected for the 2014-15 school year, the VSB could cut $13.5 million in services and programs such the multicultural and anti-racism liaisons and the band and strings program as well as continuing education, a literacy mentor and a media technician.

By eliminating the athletic coordinator role, the school board will save $72,000 annually and the equivalent of one full-time teacher. The VSB will not eliminate any classroom teaching positions and meets April 15 to discuss the proposed budget.

In addition to managing their teams, MacPhee said high school coaches would have to take on the additional tasks that come with operating numerous leagues.

“I love what I do and do it willingly, but it's a little frustrating when the powers that be have no respect for what all the volunteer coaches do across the school district because if they did, they would be trying to help us, not pile more work on us,” he said.

Other coaches contacted the Courier off the record to express their dismay.

Roughly 8,000 students at 18 high schools participate in the Vancouver Secondary Schools Athletic Association. A single high school could have more than 50 teams competing in various sports at different grade levels for boys and girls through three competitive seasons. For example, Kitsilano secondary had eight basketball teams this winter.

School boards in Richmond, Burnaby and North Vancouver employ an athletic coordinator. The Surrey school district counts the province’s only educator who co-ordinates extracurricular athletics and also supports physical education classes. Vancouver eliminated this role in the mid-1980s to save money.

Glenn Young holds that position in Surrey. If the athletic coordinator disappears, he predicted a grim future for Vancouver public schools.

“Leagues won’t run,” he told the Courier on Wednesday. “I think the impact will be greatest at the elementary level.”

For children from poorer families, notably from neighbourhoods on the East Side, elementary school teams could be children’s only opportunity at sports because they are free.

Because the athletic coordinator affects children and teens at more than 100 schools, Young said one person has a tremendous influence even if the job is primarily administrative and students never meet the coordinator.

“The kids who need it the most are going to suffer most. They need that extracurricular activity because they’re not getting it during school. They’re supposed to get P.E. every day. They don’t get that. They’re supposed to get daily exercise. That’s very hit and miss,” said Young, who is also a sessional instructor at Douglas College where he shows practising teachers how to run P.E. classes.

“The district is getting thousands of hours of goodwill from their teachers coaching. There are tens of thousands of elementary and secondary students that are benefiting,” he said. “Without someone to coordinate that, it won’t erode immediately, but they will feel the pain within a year to 16 months.”

Mike Allina, the athletic director at Van Tech secondary and the president of the VSSAA said the additional work can’t be easily absorbed or “done off the side of someone’s desk.”

“Volunteer coaches and athletic directors will not be able to cope. I have already received a couple emails saying that if the coordinator position disappears, those people will step down as their school’s athletic director,” said Allina.

“I’ve talked to a lot of people in the last five hours and we are all shaking our heads. The impact is phenomenal.”

VSB chairwoman Patti Bacchus said the provincial government is responsible for the funding shortfall, leaving school boards to make “ridiculous,” “pennywise and foolish” decisions in an effort to preserve core educational needs such as classroom teachers and aids. As a result, school culture and student engagement is at risk.

“There are different reasons why kids get engaged in school and excel,” said Bacchus. “Sport gives them motivation to do well.”

She singled out Churchill secondary and the Bulldogs senior boys basketball team that won the AAAA B.C. championship in March.

“With minimum resources, we get some amazing results and yet now we’re going to take away what little we had,” she said.

“I do wonder if there’s a deliberate attempt to undermine parent confidence so they get frustrated and, for those who can, pull out [of the public system],” she said.

With the exception of one school year, the VSB has made budget cuts for the past 12 years and has eliminated nearly $50 million in programs and services, said Bacchus.

“Now with this crunch, we’re getting down to the very core services.”

A group that identifies itself as friends of the VSSAA will hold a rally at 7 p.m. April 15 outside Mount Pleasant elementary during the VSB budget meeting.