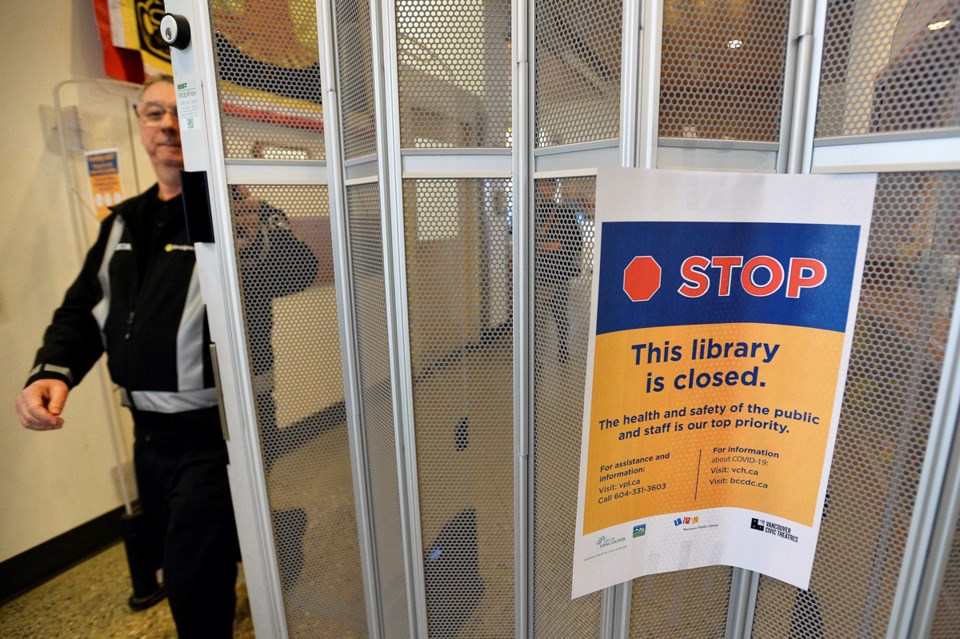 The City of Vancouver announced Monday that community centres, libraries, ice rinks and many other civic facilities will shut down. Photo Jennifer Gauthier

The City of Vancouver is closing all community centres, libraries, pools, fitness centres, ice rinks and golf courses in an effort to reduce the transmission of the coronavirus.

The closures are effective today.

Mayor Kennedy Stewart was joined by city officials Monday to also announce all civic theatres, permitted events at park board sports fields and parks will be closed or cancelled.

VanDusen Botanical Gardens, the Bloedel Conservatory and the Stanley Park train are included in the list of closures, some of which were announced last week.

“My top priority right now is to ensure we do all we can to slow the spread of the virus and to make sure our most vulnerable neighbours are safe, especially seniors and those living in [single-room-occupancy hotels], or who are experiencing homelessness,” the mayor told reporters at city hall.

The closures do not include the Evelyn Saller, Carnegie or Gathering Place community centres, which will remain open so people can access food, shelter and washrooms. But recreation and social programs at those locations will be cancelled.

Park board day camps and licensed childcare operations will remain open until further notice, but new registrations will not be accepted. Anyone who paid for a program or permit at one of the park board locations will receive a full refund.

Ticket holders for theatre events should contact the box office or the point of purchase.

City officials warned more closures could be coming, as the outbreak continues in B.C., with 30 new cases reported Monday for a total of 103 people infected with the virus.

Four people have died. All were residents at the Lynn Valley Care Centre in North Vancouver, which has been a focal point for public health officials in an attempt to stop the transmission of the virus.

The mayor suggested he could call a state of emergency, but has not chosen to follow Calgary’s lead at this time. He called on residents to follow the order of Provincial Health Officer Dr. Bonnie Henry to not participate in gatherings of 50 or more people, including in restaurants and bars.

“I know tomorrow is St. Patrick’s Day, but if you don’t think you can keep one metre or more away from others in your favourite bar, don’t go,” said Stewart, who urged people to consider take-out or ordering online to support businesses affected by the new order.

He said the city continues to work with more than 10,000 low-income residents, who are unable to self-isolate, many of whom with compromised immune systems.

“We are developing a plan for these folks in terms of testing, isolation and support,” said the mayor, noting a Downtown Eastside task force has worked over the weekend to respond to residents’ needs, including setting up hand-washing stations.

“Right now, there is very little in the way of sanitation services for those living in [single-room-occupancy hotels] and shelters, and those who are homeless. This poses a risk for both residents and staff.”

The mayor said he had a phone call scheduled for Tuesday with Deputy Prime Minister Chrystia Freeland and will ask for support “to make sure that our neighbours who are under-housed or homeless are safe, and to ensure no one loses their housing because of COVID-19.”

Stewart said he directed the city’s finance team to look at extending the city’s rent bank and make it easier for people to access money to help pay rent. He will be requesting money from the federal government to help with this move, he said.

As the global economy slows, the mayor said, stimulus funding will be necessary in the city and across the region to keep businesses and projects moving.

He said the Vancouver Economic Commission will be involved in a proposal to the provincial government to apply the residential property tax deferment program to businesses.

Despite the disruptions and inconvenience the closures will bring, Stewart said it was important for residents to remain calm and support friends and neighbours who are vulnerable.

“No one needs to hoard supplies,” he said, referring to the lineups of people at supermarkets.

“It doesn’t help, and only puts people at more risk. We need keep asking ourselves how we can help each other.”

Residents can check the status of city facilities, events and services on the city’s website, which is updated regularly.