Seven Vancouver high school students got a trial run in law when they attended a “legal boot camp,” the first of its kind in British Columbia, last week at UBC.
May 13, 2014 2:52 PM By: Wanyee Li 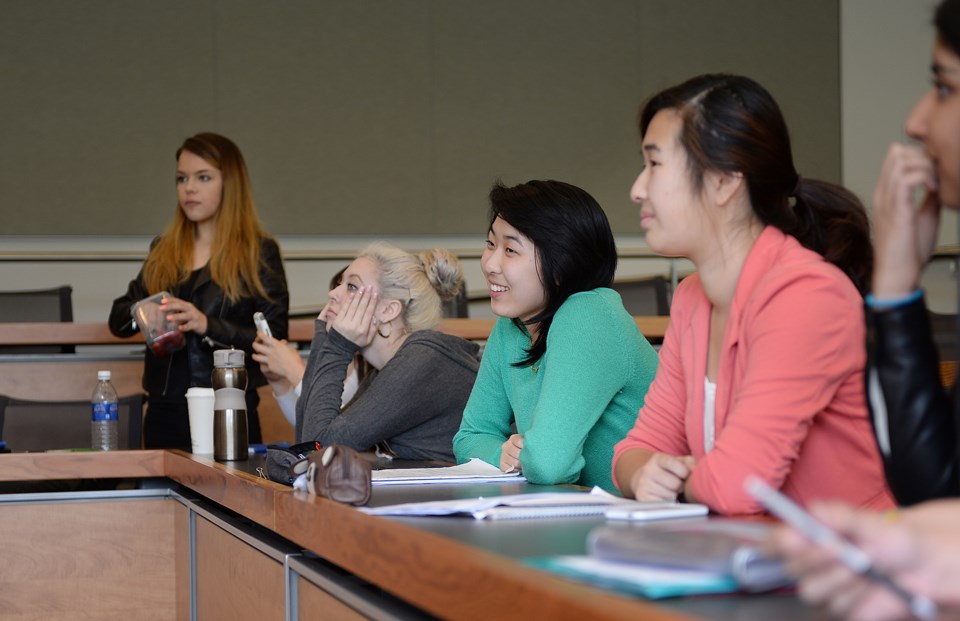 Seven high school students attended a week-long law program at UBC, the first of its kind, organized by lawyers and the VSB. Photo Dan Toulgoet

Seven Vancouver high school students got a trial run in law when they attended a “legal boot camp,” the first of its kind in British Columbia, last week at UBC.

The grade 11 and 12 students from East Side schools spent one week away from their regular classes to attend lectures at UBC, sit in on trials at the B.C. Supreme Court, and tour law offices in downtown Vancouver. The students did not have to pay any fees to participate in the program — only their own bus fare.

“Knowledge that you can’t take out of a book” is how 16-year-old Halley Sana described what she learned during the week. Although she is known as being a law enthusiast at her school, Charles Tupper secondary, Sana wanted to know more about the profession before committing to it.

“I had a little bit of doubt coming into this program. I needed to know what lawyers do on a daily basis. And this program 100 per cent confirmed that this is what I want to do. I don’t have any doubts about that now,” she said.

The weeklong program is the brainchild of Vancouver lawyers Alon Mizrahi, Isaac Filate, and Keri Williams. They set up the Vancouver

Summer mentorship Society in anticipation of running the legal boot camp and worked with the Vancouver School Board and UBC to organize the logistics.

According to Mizrahi, the idea stemmed from a conversation he and Filate had at a bachelor party. Filate had gone to a similar program at the University of Toronto when he was in high school.

“My parents were first generation Canadians and I liked the idea of becoming a lawyer but I didn’t know what that would look like. But after I attended the program at U of T, I was inspired,” said Filate.

Gino Bondi, the school board’s district principal for specialty programs, said that high academic standing was not the only criteria considered when picking students for the program. “We wanted to pick kids who have parents who are not university educated,” he said.

“For a lot of kids who don’t have an access point to mentors or professionals, this would give kids that access to see what the legal profession was all about.”

Social mobility was the main motivation behind the legal boot camp program, according to Mizrahi.

“Lawyers come from all walks of life. We like the idea of doing a program that embodies that in terms of trying to increase exposure to it, to kids who may not have access to lawyers,” he said.

Seventeen year-old Stephanie Lim takes a law course at Vancouver Technical secondary but says the legal boot camp took her far beyond what she would learn in class.

“It gave us a really diverse knowledge base because all these lawyers have different backgrounds and they specialize in different areas of the law,” she said. “To have the basics multiplied and extrapolated to this level was really interesting.”

Touring a law firm gave students an experience most people never get. This was Sana’s favourite part of the program.

“I really liked when we watched the trials and toured the mentors’ firm. It just gave you a sense of the life that a lawyer has,” she said.

Starting the program small with seven students was intentional, according to Bondi. Plans to expand the program next year are already in motion.

“These seven kids will go back to their schools and be ambassadors for the program. I wouldn’t be surprised if next year if we had 20, 30 students,” said Bondi.

For Filate and Mizrahi, legal boot camp is ultimately a way for them to give back to the community.

“We view being a lawyer as a privilege and a responsibility. This program gives us an avenue to help provide people with the knowledge that we sometimes take for granted,” said Mizrahi.