Rampant school spirit, a plethora of personal laptops, electronic tablets and smartphones in classrooms and discussions about field trips were what Van Tech student Elysha Fong noticed on her two-day exchange at Hamber secondary.
Apr 17, 2014 12:47 PM By: Cheryl Rossi 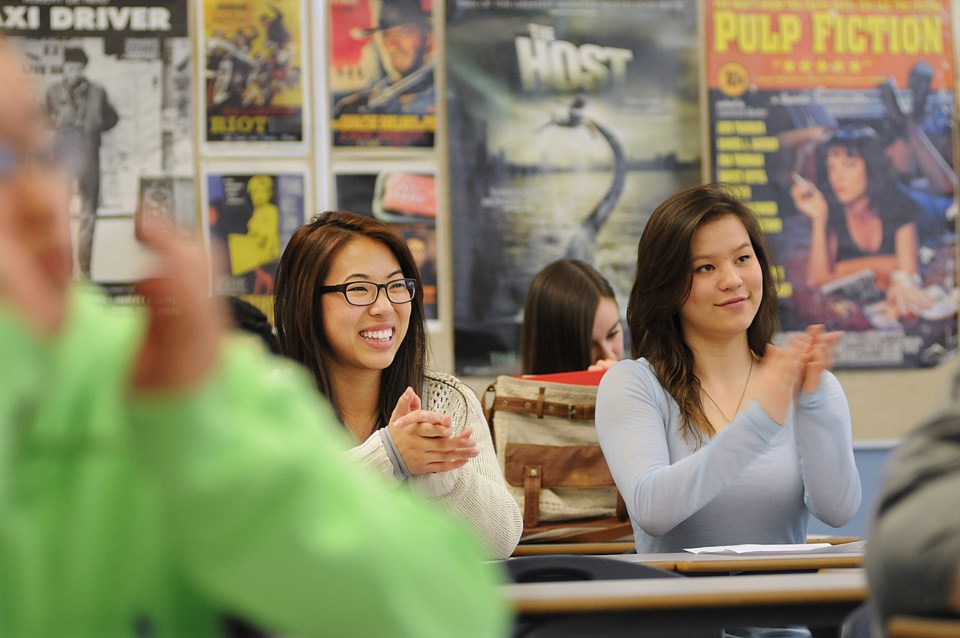 Rampant school spirit, a plethora of personal laptops, electronic tablets and smartphones in classrooms and discussions about field trips were what Van Tech student Elysha Fong noticed on her two-day exchange at Hamber secondary.

“I haven’t been on a field trip in quite a while,” said the Grade 12 student who lives a seven-minute walk away from Vancouver Technical secondary near East Broadway and Nanaimo Street.

Fong was one of 105 Grade 9 to 12 students who participated in the Vancouver School Board’s Sister School Exchange’s ninth year last week.

The exchange pairs a student from an East Side school with a partner from a West Side school. Fong attended classes and extracurricular activities at Hamber, between Oak and Cambie streets, and then her counterpart Crystal Lau attended Van Tech.

“The main thing for me is definitely the school spirit that Hamber has,” said Fong, Van Tech student council president. “I want to somehow try and capture that and bring it back to Van Tech.”

Six students ran for student council president at Hamber with weeklong campaigns. “Whereas we had one person run for president [at Van Tech] and it was me,” she said.

While Hamber displayed more spirit and “togetherness” as a student body, Hamber students noted “chummy” relationships between students and teachers at Van Tech. “At Van Tech, I find our teachers are very open to conversation, like you can go talk to them about things other than school and they’ll be there to help you out and support you,” Fong said. “At Hamber I felt and my partners felt, actually, that it was a little bit more like we’re your teachers and you’re the students and of course they’re there to help you for school stuff but there wasn’t really that level of almost friendship.”

As for the abundant use of personal electronics and field trips, Fong wasn’t sure what to say. “I’m trying to avoid saying our school’s poor,” she said. “Our school’s definitely poor, but I think we’re doing fine.”

Sister School Exchanges aim to foster friendships and break down barriers between East and West Side schools and provide students with the experience of another school’s culture so they can potentially adopt the other school’s practices at their home school.

This exchange was Fong’s third. She’d previously visited King George secondary in the West End and Lord Byng in West Point Grey. She hadn’t visited either school previously and hasn’t returned but befriended her exchange partners on Facebook.

“Almost everybody had a perception of what their host school would look like, but once they got there and spent time going to that school their perspective completely changed,” he wrote the Courier in an email.