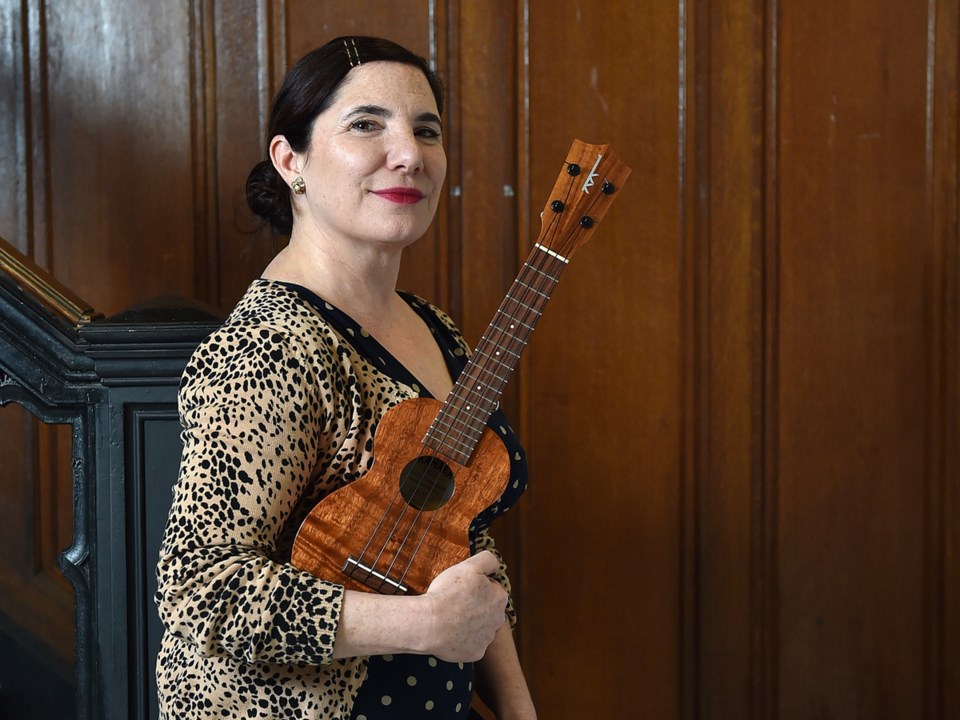 Daphne Roubini is the founder of Ruby’s Ukes and head honcho behind the Vancouver Ukulele Festival, which celebrates its 10th anniversary March 22 to 24 at the Croatian Cultural Centre.Dan Toulgoet

Her resume includes stints as a masseuse, aroma therapist, jazz singer and a personal coach.

Now, Roubini’s go-to gig is running what’s billed as the largest ukulele school — Ruby’s Ukes — outside of Hawaii, and she does it without a single cent spent on advertising.

Somewhere in the midst of all those moving parts, Roubini is heading up the 10th incarnation of the Vancouver Ukulele Festival, March 22 to 24.

That such a niche celebration is growing, much less still exists, after a decade underscores the plucky Brit’s sense of self belief, which was on full display during the Courier’s recent visit to her downtown school.

“When I like something, when I’m into something, there’s usually some people coming up behind with me,” is how Roubini explains her success.

Established on Seymour Street in 2009, Ruby’s Ukes has followed the build-it-and-they-will come ethos. Prior to launching, Roubini’s marketing strategy included putting up 100 posters in local cafes and not much else.

That first class included 12 people and one other instructor. Now, Roubini and her husband, Andrew Smith, run three separate intakes of 350 students, employ four instructors and an assistant, all the while being able to afford rent in downtown Vancouver.

“The ukulele’s popularity has come from its lack of expectation,” Roubini says. “People pick it up and they have a sense of fun with it, so that they’re able to move away any kind of judgment or self-expectation.”

The growth seen at Roubini’s bricks and mortar location has been mirrored over the course of the festival’s decade-long history. The first incarnation was held at Roubini’s shop and had 65 attendees, before moving to St. James Community Hall — capacity 200-plus — in Kitsilano. The festival has since outgrown the Rio Theatre and will be spread across display and performance spaces at the Croatian Cultural Centre.

Roubini suggests the ukulele world is small enough and insular to the point that reaching out to the who’s who of the four-stringed world makes attracting big names pretty easy.

But that doesn’t explain the popularity of the instrument itself. To that point, size and cost are major pluses — a low-end ukulele costs $45 and can easily fit on public transit, or on your back as you cruise through town on your fixed gear bike.

Efficiencies aside, Roubini also maintains that the learning curve isn’t especially steep. By the end of lesson one, would-be ukuleleists have the necessary tools to learn three chords and 200 songs — including “You Can’t Always Get What You Want” by the Rolling Stones.

“By week seven of my absolute beginner’s class, that means people who have never touched a ukulele before, they are playing a Beethoven piece called ‘Ode to Joy,’” Roubini said.

The Vancouver Ukulele festival runs March 22 to 24 at the Croatian Cultural Centre. Tickets are available online at rubysukes.ca/vancouver-ukulele-festival.