Vancouver voters could decide fate of whales in captivity 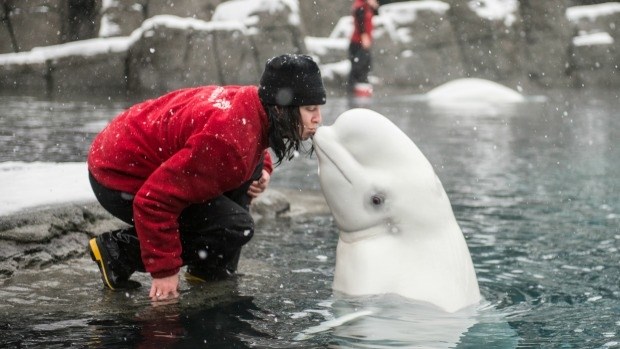 The death of Aurora, a 30-year-old beluga whale, in Nov. 2016 was on the minds of Vancouver park board members when they decided last month to ban cetaceans in captivity at the Vancouver Aquarium.Neil Fisher/Vancouver Aquarium

The voters of Vancouver may control the fate of whales and cetaceans at the city’s aquarium.

The question — tentatively, do Vancouver residents support keeping cetaceans in captivity — could be asked at polling stations during the 2018 municipal election.

In a motion brought forward by the NPA’s Sarah Kirby-Yung, park board commissioners will debate Monday if they will push the city to include such a plebiscite on ballots. If passed, the motion includes asking the Vancouver Aquarium to “consider not bringing cetaceans into the facility until after the results of the 2018 plebiscite are received.”

In November, the remaining two beluga whales at the Vancouver Aquarium both died. Qila, the first beluga conceived and born in captivity at a Canadian aquarium, died nine days before her mother, Aurora, died.

Following the first beluga death in the fall, Kirby-Yung said she felt the debate should be put to Vancouver voters in a referendum.

Three years ago, members of the elected park board announced plans to ban cetacean breeding at the aquarium, but commissioners eventually voted down the bylaw. The aquarium is prevented from capturing whales and dolphins for display purposes but can obtain animals from other facilities where they were born in captivity, captured in the wild before 1996, or were rescued and considered unable to return to the wild.

Vancouver was home to the first orca whale captured in the wild but has not counted the species among its menagerie since 2001.

The discussion is also playing out at a national level in the Senate. Nova Scotia senator Wilfred Moore has proposed amendments to the Criminal Code that would put an end to cetaceans in captivity in Canada with the exception of rescue and rehabilitation.

“The evidence shows that keeping these incredible creatures confined in swimming pools is unjustifiably cruel,” he said upon the bill’s second reading on Jan. 27, 2016.

The Vancouver Aquarium is a private not-for-profit facility operating as a tenant under the jurisdiction of the park board, which regulates all activities in city parks, is one of two locations in Canada that has whales and dolphins. The other is Marineland, a private theme park in Niagara Falls, Ont., of which a former trainer consulted with the senator on the bill.

Correction: The Vancouver Aquarium is not a public facility, rather it is a private non-profit organization with a board of directors.