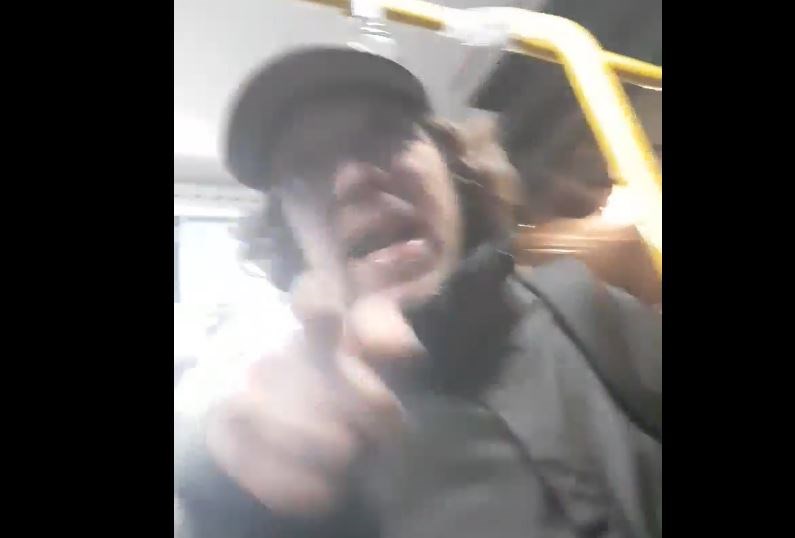 After leaving the bus, the alleged attacker punches the window the victim is seated near, re-enters the bus and attacks the woman both verbally and physically. He attempts to steal her phone and the pair fought outside the bus after the video ends.

Vancouver police are investigating a brazen late night attack aboard a bus leaving the Granville Strip that has left the victim questioning security protocols on late-night transit.

The attack took place shortly before 2 a.m. on Oct. 4 near the intersection of Granville and Davie streets. In the span of less than 10 minutes, the incident included alleged assault, sexual misconduct and attempted theft.

Speaking to the Courier exclusively, the victim, who has asked to have her name withheld, provided video of the final 90 seconds of her ordeal.

The video begins with a man appearing to pull up his pants and a bus driver approaching him. The man then approaches the woman, who is the only other person on the #14 bus, and asks for money.

She refuses, all the while filming the man who is hurling insults and profanity her way.

The attacker then gets off the bus, punches the window the victim is seated near, re-enters the bus and attacks the woman both verbally and physically. He attempts to steal her phone and the pair fought outside the bus after the video ends.

The woman got her phone back, but was dumbfounded by the response from the driver, who she said didn’t call the VPD or transit police.

“He said he didn’t know what to do,” the victim said.

The Courier asked TransLink for comment, but didn’t receive a response prior to print deadlines.

The woman suffered minor injuries — cuts and bruises — and the VPD confirmed to the Courier Tuesday morning that an investigation is under way.

“The suspect left the scene and was not identified. Investigators are reviewing further CCTV footage and the investigation remains ongoing,” VPD Sgt. Jason Robillard said in an email to the Courier.

What the video doesn’t show is the minutes leading up to the attack. The perpetrator asked the victim for money while she was walking down Granville Street and she refused. The man then followed her to the bus and forced himself inside without paying, the victim said.

The video has garnered close to 20,000 views since being uploaded to YouTube five days ago on Oct. 5.

The victim works in sales and regularly commutes across Metro Vancouver. She said similar inappropriate behaviour — men leering, making inappropriate comments or even exposing themselves to her — happens on an almost weekly basis on transit.

“Stuff like this has happened to me before but this isn’t why I shared the video — I didn’t think this would become a big thing,” the victim said. “But this guy has done this shit before.”