George Bowering suffered a cardiac arrest in April outside a library
Oct 19, 2015 4:02 PM By: Mike Howell 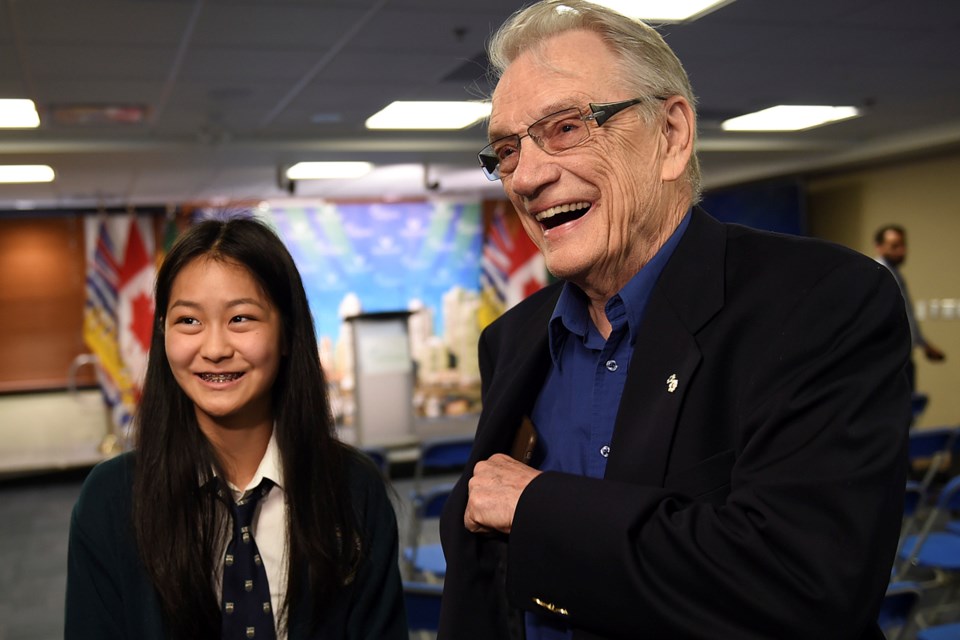 As a celebrated author, George Bowering has no problem telling a story.

There’s the award-winning novel Burning Water, the poem Kerrisdale Elegies and his collection of essays, A Way with Words.

But do you think the 79-year-old writer who was once Canada’s parliamentary poet laureate could tell the most important story of his life?

That would be the one where he went out for a stroll one rainy April afternoon with his dog, went into cardiac arrest and collapsed on a sidewalk outside the West Point Grey library.

“I was taking some stuff to the library and to mail but I don’t remember any of that, I’ve only been told about that,” said Bowering, who attended a ceremony at city hall Monday where he met some of the people who came to his rescue. They also filled him in on what happened that day.

Fire Chief John McKearney recognized student Ivy Zhang and library workers Trina Brulhart and Jane Curry for attending to Bowering and getting him medical help. They were among 14 citizens given commendation certificates for their selfless acts across the city, all of which involved resuscitation efforts.

Zhang, 14, and the two women had not met Bowering until Monday’s ceremony. Bowering thanked Brulhart and Curry, who ensured the branch’s defibrillator got to the scene. He then walked over to Zhang and asked for a hug, which was granted.

“It’s wonderful to see you,” Bowering told her. “It’s nice to be alive.”

Zhang: “I’m so glad you’ve had a good recovery.”

Zhang, who was in Grade 8 at West Point Grey Academy at the time, was on her way to a bus stop and walking behind Bowering, who was with his 102-pound Bernese Mountain dog, Mickey.

She saw Bowering fall to the ground. She thought he tripped. When she saw that he was unconscious, Zhang dialed 911 on her phone and stayed with Bowering to check on his breathing.

“The [911] operator told me to count the seconds between each breath,” she said, recounting her story to reporters as Bowering listened. “And then the operator told me to get some adults from the library and bring out the First-Aid kit and they did. And we were about to put the electric thingy [defibrillator] on him and that’s when the ambulance came.”

Although Zhang didn’t recall (“It was all a blur”) a man also attempted to perform CPR on Bowering and then left the scene. That’s a detail that Bowering’s wife, Jean Baird, heard a few days later from a patron at the library.

All Bowering knows is he’s grateful for all the people who helped, knowing how crucial it was that someone intervene in the first few minutes of a cardiac arrest.

“All my doctors have told me I’m supposed to be dead,” he said, noting he was in a coma for two weeks in hospital.

Although Zhang and Bowering had not met until Monday, Bowering previously mailed some of his books to his new friend. He asked her Monday what she thought of his work.

Bowering: “Good, I’ll write some more. That’s one reason I’m glad you made sure I’m still here because I’m halfway through writing a novel and I want to finish it.”

The irony of an author collapsing outside a library was not lost on Bowering, whose poet friend Phyliss Webb joked that he should stay away from libraries. He laughed at the re-telling of that, laughed about Zhang liking his books, laughed about his dog Mickey getting a ride in an ambulance.

The strange thing about that day is Bowering never walks Mickey in the afternoon. His wife said for some reason Mickey came to Bowering’s desk, as if to demand to go outside.

Bowering, a hardcore baseball fan, was to spend Monday night in front of his television, watching the Toronto Blue Jays play t the Kansas City Royals. The author and his wife have taken annual baseball trips to different ballparks around the United States but had to cancel April’s trip because of Bowering’s setback. Health permitting, he hopes to get back on the road next spring.