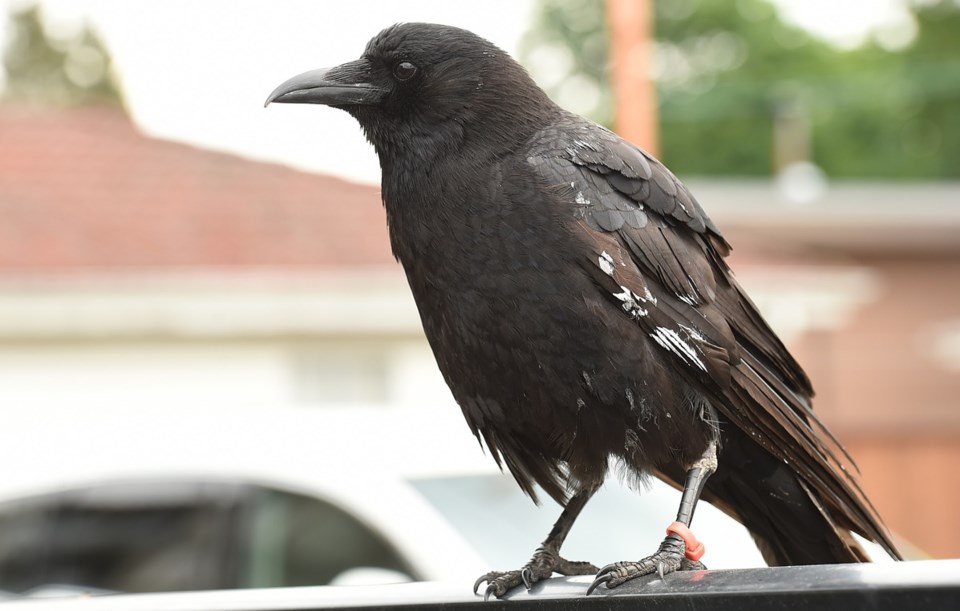 Canuck is the first crow to be banded in North America for non-endangered and non-research purposes. He has also been placed in the North American database for birds.

“It took a long time to get it but it was well worth it,” Bergman told Vancouver is Awesome.

“It’s something that makes me feel a lot more secure in his safety.

“There’s an added bit of protection with being banded by the Canadian Government.”

Canuck now sports a uniquely numbered metal band, supplied by The Federal Bird Banding Office in Ottawa, along with his orange band that makes him visible to his fans.

The tags usually allow researchers to track individual birds throughout their lifetime as well as track bird movements globally. On average 1.2 million birds are banded in Canada and the U.S. each year.

Bergman said in his request for a federal band he provided examples of how Canuck was unique and special in his own right.

“The fact that he has decided to make a life of humans and crows, I thought it was in his best interest to provide him with a little bit more safety,” he explained.

Bergman said the idea for the federal band came about during the filming of the Canuck & I documentary back in 2016, while he worked with ornithologist Rob Butler.

In the post he thanks Derek Matthews and his team from the Vancouver Avian Research Centre for making it a reality.

Matthews, who operates a research and banding station, told Vancouver is Awesome last month he had been asked by Bergman to help him put a federal band on Canuck. He said Bergman wanted the band so that it would be clear Canuck was a wild bird and not a pet.

Bergman also wanted to let fans know experts had checked the orange band and it was safe for Canuck to continue wearing it.

The post has received close to 5,000 likes and hundreds of messages of congratulations from avid Canuck followers.