It used to be that Noel Fishers favourite word to describe his looks was pasty. Now its vampirish.
Oct 23, 2012 9:00 PM By: Vancouver Courier Staff 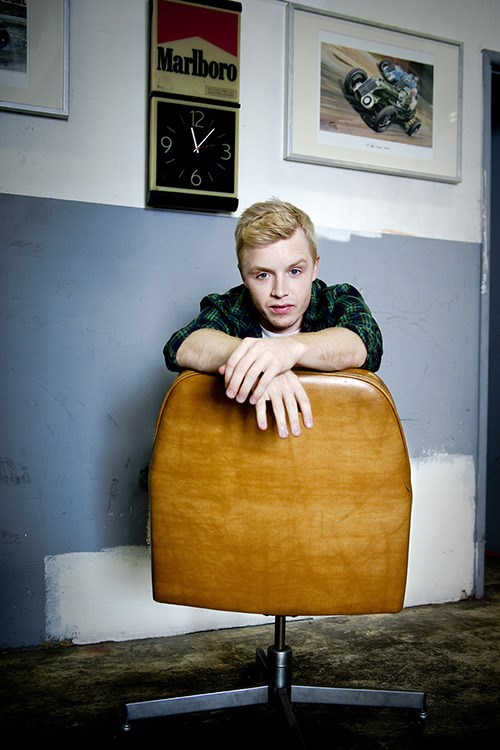 It used to be that Noel Fishers favourite word to describe his looks was pasty.

I definitely thought [my paleness] was something that would work against me, says the 28-year-old actor whos about to début as a 3,000-year-old Romanian vampire in The Twilight Saga: Breaking Dawn Part 2. Im going to have to thank the world for getting so into vampires. Its well-timed for my pastiness.

The Vancouver actor he grew up near Commercial Drive and hopes to be back this Christmas jokes that part of the reason he was chosen for the role was how much money the producers could save on make-up. Im sure the fact that I cant tan helped them, he says as one of dozens of self-deprecating comments he makes during a half-hour telephone interview from his base in Los Angeles.

However, Twilight fans, please know that his paleness is not attributed to any ghoulish ancestry. My heritage is from everywhere that doesnt have the sun, he laughs. His fathers side is from Britain with a bit of Eastern European thrown in; his mother, although born in Ohio, is from good, pale Irish and Scottish stock. None of these places are known as tanning destinations.

Are you getting the sense that although Fisher has starring roles in Breaking Dawn (the aforementioned Vladimir), Shameless (the angry bully Mickey Milkovich) and Hatfields and McCoys (the mentally challenged Cotton Top Mounts), he hasnt been so blinded by his success that hes lost the ability to laugh at himself or realize just how lucky hes been?

Ive been very proud lately, he says of his current roles. Its like, wow, I get to act with Kevin Costner and Bill Paxton and William Macey. I grew up watching them and now Im in a scene with them. Whats happening?

But what he respects even more about the actors hes been lucky enough to work with is how theyve managed to stay real even though theyre immersed in the surreal world of Hollywood stardom.

He says there seems to be a common trait among actors who are good at what they do they remain grounded. (Just like Fisher, by the way.)

For instance, Bill Paxton is just a wonderfully warm, generous-hearted person. He makes the set fun and sits down with everyone. Hes very much like a friend. Hes just a guy. Thats the same experience I had on Twilight. They create a positive work environment on the set. [With Shameless], theyre family in the script and theyre family on the job.

He credits his family for providing him with the rootedness that will put him in good stead once Twilight fans see him on the big screen. I feel lucky with the parents I was born to people who love their children and try to give them as much support and opportunities and love as they can. Im hugely thankful to them.

And yet how is it that someone who was born with such a sunny disposition can play malevolent roles so easily? Fisher, who got his first acting job in a Vancouver theatre production of Oliver Twist, actually finds it quite enjoyable to play against type.

The way I approach my character is trying to find the head space each one operates from. With people who are violent or exist in a darker place, everyone has those aspects of themselves, whether theyre acted upon or not. Everyones been angry or in a place where they thought they had to defend themselves. Its not that much of a jump. You look for similarities and thats what makes it fun.

I play make-believe for a living. I never get beyond the 12-year-old playing Ninja.

There are actors such as Daniel Day-Lewis who are known for the way they immerse themselves in their characters lives almost becoming them in real life. Id like to try that, Fisher says with a hint of humour, but maybe not with characters as psychotic as Ive played.

And even though Fisher travels to the dark side in the roles he plays, Ive never had a problem leaving roles behind. Im lucky Im a fairly light-hearted person. Im a little on the quirky side. Ive never felt in danger of not being able to leave a dark place.

After he says that its an easier step to play someone exactly opposite to you, hes asked what role would be true to type. A coffee addict who wakes up a little too late. Thats my dark side. No, wait. The dark side is waking up and realizing hes out of coffee.

Speaking of coffee, bringing a book to the JJ Bean on Commercial Drive is on his to-do list when he returns home for a little downtime with family at Christmas. That, and getting a cinnamon bun at Sollys Bagels off Main. Im obsessed with Sollys cinnamon buns, he says. Theyre so good.

Hes a bit worried that his younger sister Raena wont be able to make it now that shes working in Toronto. (Raena, if youre reading this, youd better come home for Christmas.) He cant quite describe exactly what Raena does except to say its something for very educated and smart people and that when he was filming in Romania, Raena was in Italy with the UN and it was great to get together. Were really good friends, he says. I lucked out.

And hes actually not going to mind trading the LA sunshine for Vancouver rain (and not just because it allows him to keep his vampirish paleness for all those Twilight fans who might recognize him on the street.)

I dont miss the rain but I do miss the seasons, he says of life in La-la land. Its nice walking up the streets near Commercial Drive. I have all those memories of massive trees and leaves on the ground and being forced to rake them.

Hes just hoping that his parents dont hand him a rake to help him remain one of those grounded actors he admires so much....