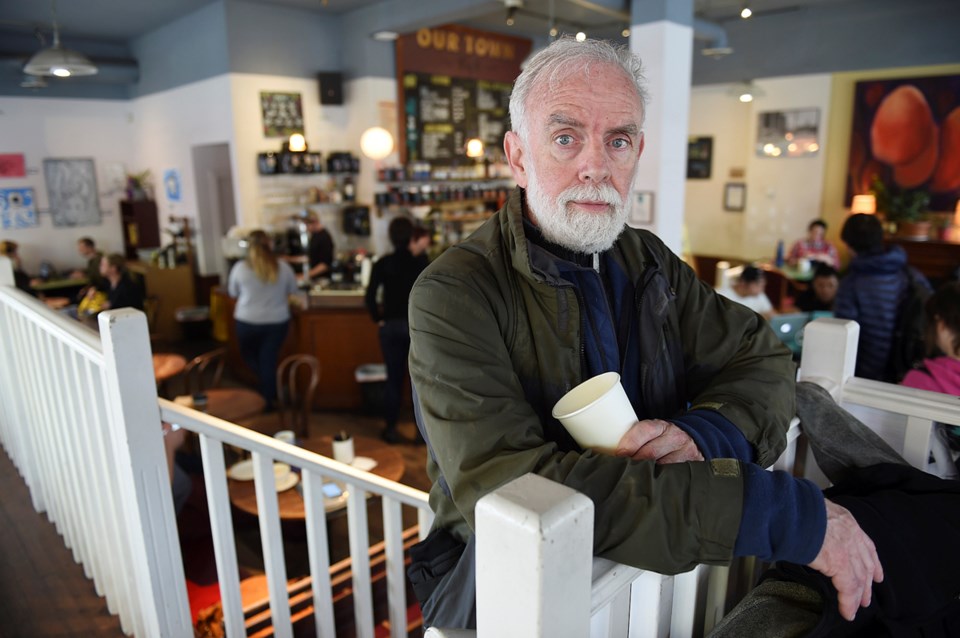 Tom 'Kahni' Fowle says a badly gentrifying and carelessly densifying neighbourhood is "like a million tourists showing up at a beach because it’s not a tourist destination and then destroying what they came for." Photo Dan Toulgoet

This morning when he walked in his neighbourhood coffee shop, Tom ‘Kahni’ Fowle didn’t realize it was the last time he’d take his tea the way he likes it: a large London fog with no added vanilla, ordered to stay at Our Town Café.

The bustling coffee shop at the corner of Broadway and Kingsway will close tonight after serving its final customer, another business apparently lost to rapid development in Mount Pleasant.

“It’s the classy Bohemian coffee house,” said Fowle. “It will be sorely missed.”

However, while the café is closing, the building is staying. The general manager said he is sad to see the end of Our Town and added there is “no real reason” other than a “shift in direction" and need for an "update."

“There was a lot of care put into the place,” said Dexter Holmes, who has ties to the building owners but wouldn’t specify how. He learned of the closure yesterday along with staff.

“I can’t speak too much to the reason. There was a lot of care being put into the place. We did our best to run it,” he said, adding he wants to see another community-oriented venture return to the space.

Thanks for the memories, Our Town. ☕

The city planning map identifies it as the largest property on the block, an uniquely shaped triangle, and lists five other properties under the primary address which skirts Broadway and Kingsway.

In Mount Pleasant so far this year, numerous long-tenured businesses have left the neighbourhood, including vegetarian restaurant the Foundation, second-hand furniture store Sellution Quality Consignment, and creative space Hot Art Wet City. In fact, in the triangle bordered by Main Street, Kingsway and Broadway, six businesses have moved since the beginning of the year and such changes are closely watched (and feared) by heritage groups. The block houses numerous artist studios as well as businesses that draw customers from across the city, just as Our Town did.

"They are there one day and gone the next" said Fowle. "I have no idea how places hang on, it must be by their fingernails. I don't know what the solution is but one thing to do is to support them."

A few blocks to the west, outdoor retailer 3 Vets will also shut its doors in November since the owners, two sons who took over the business from related war veterans, were finally forced to cash in the lucrative land value because of property taxes and declining sales.

Over at Our Town, Holmes wouldn’t say if financial pressure is part of the decision to close or what kind of business could replace the coffee shop.

“We’re sad to leave the community. We’ve had tons of people in, mourning and saying their good byes with us. It was short news," he said.

The staff was informed yesterday, May 2, that the café was closing today as usual at 11 p.m.

"Today is our last day and tomorrow we won’t be open,” said barrista Vanessa Carrasco. “We got notice about it yesterday. We are all really upset about it. We are upset for our customers and for ourselves as well. We really like this place.”


Fowle said he started going to Our Town when it first opened in 2003 and still goes nearly every day. “How many days are there in a week,” he said rhetorically. Since he moved to Vancouver in 1969, he has seen immense change throughout the city and said he worries the neighbourhood may turn into a satellite Metrotown if another high-rise goes up across from the Independent, now under construction, and property owners face further enormous financial incentive to sell if and when a subway opens at the intersection.

The technology consultant, whose wife is also a near-daily regular at the café, said he valued the attitude at Our Town because it served street people with respect, allowed customers to linger, and held an open mic nights. The coffee was excellent, too. He is not opposed to density, but said he wants to see civic planning that does not wring the life and soul out of a city to the benefit of the highest and tallest bidder.

“Beware of unintended consequences,” he said. “The very things that made Main Street appealing to a developer behind something like the Independent and made it possible to sell at the price they did, is what will be destroyed by the Independent. It’s like a million tourists showing up at a beach because it’s not a tourist destination and then destroying what they came for.”

On May 10, the city is holding an open house to address Mount Pleasant residential zoning, notably multi-unit homes with two or three suits as well as laneway housing and other forms of housing known as infill.