As commercial and industrial properties skyrocket, owners are passing down costs to lease holders
Jan 18, 2018 10:24 AM By: John Kurucz 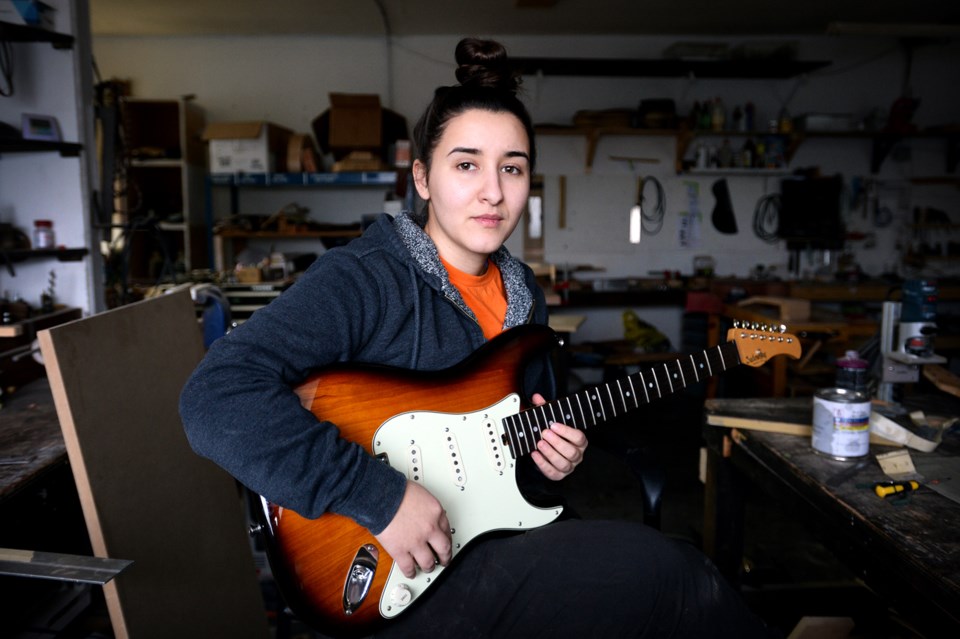 By almost any metric, Meredith Coloma can be looked at as a posterchild for success in today’s Vancouver.

At just 27 years old, she’s an educated entrepreneur with a niche business that serves customers from around the world.

Between her and her partner, they pull in close to $250,000 annually in pre-tax income.

And yet, Coloma is considering closing up shop and moving her luthier business to the ’burbs.

“I earn almost $15,000 a month, which is huge for this city,” Coloma told the Courier. “And it almost all goes to business costs, housing costs and taxes.”

Coloma builds custom guitars, mandolins and other wooden instruments out of a top-floor commercial space near Main Street and Second Avenue that’s inhabited by about 30 other artists: photographers, painters and those in the movie business. Coloma does on-the-spot repairs for touring bands the world over, and gives lessons to clients from all across North America and Europe. Her student waitlist is upwards of a year.

Coloma has been in the space for three years, and it wasn’t until the past 12 months that trouble crept in. The property was bought by a development company; tenants were told the space will be re-developed and they’ll have to relocate by the summer. Everywhere she’s looked since — Mount Pleasant, Chinatown, Railtown and the River District — has an onerous system known as triple net. Triple-net leases see landowners pass on property taxes, rent and utility costs directly to lease holders. Add on the fact that B.C. Assessment figures released earlier this month point to wholesale increases — upwards of 50 per cent — for commercial and light industrial, and it’s a death knell for many small businesses in Vancouver.

Coloma’s current rent costs around $3,000 monthly to operate in roughly 1,500 square feet. The places she’s looked at are three times that cost in rent alone. The triple-net stipulation tags on anywhere from $18,000 to $35,000 in additional fees. She’s also seeing a dramatic rise in cost-of-living expenses at her apartment in the form of additional security and maintenance fees.

“My partner and I make almost a quarter of a million dollars a year and we can’t enjoy the benefits of that,” Coloma said.

Coloma is far from being an outlier in Vancouver’s small business community. Weekly, if not daily, media reports signal the closure of long-standing, legacy businesses in the city: 3 Vets, Sellution and the Kitsilano location of Plum have all gone under in the last three months alone. The Chocolate Mousse is closing next year. Store owners at each business have attributed increased rents and property taxes as contributing factors.

Plum co-owner Ed Des Roches told the Courier that the Kitsilano location of his women’s fashion store closes for good on Jan. 27, after 37 years. On top of the closure, the company will ease its focus on made-in-Canada products and four staffers have lost their jobs.

“A lot of people are disappointed, actually, because we’ve been in Kitsilano since the beginning,” Des Roches said. “We’ll still source Canadian [products] when we can, but we’re not restricting ourselves to Canadian. It’s just uncompetitive.”

Cheaper, overseas labour is forcing the decision on the design end. But “high rents and exorbitant property taxes” are driving the decision to close in Kits. The company’s location on Granville Street and West 12th Avenue will remain open.

“On South Granville, in the past we never saw vacancies,” Des Roches said. “People rented before it ever had a for-lease sign. Now I think there’s probably 10. And that’s a premium shopping street in the city.”

On average, residential property taxes are going up 4.24 per cent this year. Des Roches suggests that number is closer to at least 19 per cent for businesses. Those numbers fluctuate from neighbourhood to neighbourhood and business to business depending on an array of factors:  property size, age, quality, view and location. Taxes are typically more affected by how assessments change when compared with average changes in a given community. Outside of municipal needs, property taxes also go towards TransLink, B.C. Assessment and provincial school taxes, among other agencies.

Properties purchased as speculation investments exacerbate the problem, says Des Roches. He’s arguing for a fairer distribution of the tax and assessment burdens for properties that have a mix of commercial and residential to cut down on speculative costs: assess the commercial component only when a business is in operation in a given space, assess the value of the residential component separately, and then tax the two property types at different rates.

For its part, the city acknowledges the threat that triple net poses to Vancouver businesses.

“What we are seeing in our market is that real estate speculation has driven up the value of land significantly and, through these agreements, property owners are passing on the increased cost of taxes to their tenants,” Patrice Impey, the city’s chief financial officer, told the Courier via email. “While property owners benefit substantially from rising property values upon redevelopment or sale, small business tenants continue to shoulder the entire tax burden passed on to them by their landlords through triple net commercial leases.”

Impey said city staff are consulting with the province, BC Assessment and business improvement associations to make the tax system more equitable.

Last summer city staff requested amendments to provincial legislation that would result in land assessment averages changing to five years rather than the current three years. The move is aimed at properties where values increase by more than 10 per cent, and is intended to “smooth out the spikes” in property tax changes from year to year.

On Wednesday, NPA Coun. George Affleck introduced a motion aimed at small business tax relief via a small business retention program, targeted tax reductions and a small business committee. The motion passed unanimously, and staff will report back within 90 days with particulars around how to roll those measures out.

In the meantime, staff is also expected to do an internal audit of sorts to consolidate programs already in place and get rid of areas where there’s duplication.

“We want to create a nimble decision-making process at city hall driven by the businesses themselves and their needs and challenges that we can address in real time,” Affleck told the Courier in an interview the day after his motion was discussed.

The owner of Massy Books on Main Street and Sixth Avenue, Patricia Massy finds herself in a good news/bad news scenario. Her building is being redeveloped — she knew it was coming — and Massy has since secured a viable alternative location near Main and Georgia Street.

That bad news? It took her two years to find the new location. During that search, she saw properties along Main, Broadway and Denman Street with the following monthly rental price tags: $7,500, $30,000 and $10,000.

By contrast, her rent is currently $2,730, while the new space on Georgia will be about $3,700, on top of a property tax rate that’s calculated at $7 per square foot.

The locations on Broadway and Denman eventually both turned into A&W fast food restaurants.

“There’s a lot of negativity around and I understand it,” she said. “These places are affordable enough only for big chains. These little mom-and-pop shops and start-up companies, they’re disappearing.”