Jon McComb is also a fierce advocate for people living with mental illness
Dec 1, 2018 7:00 AM By: Sandra Thomas 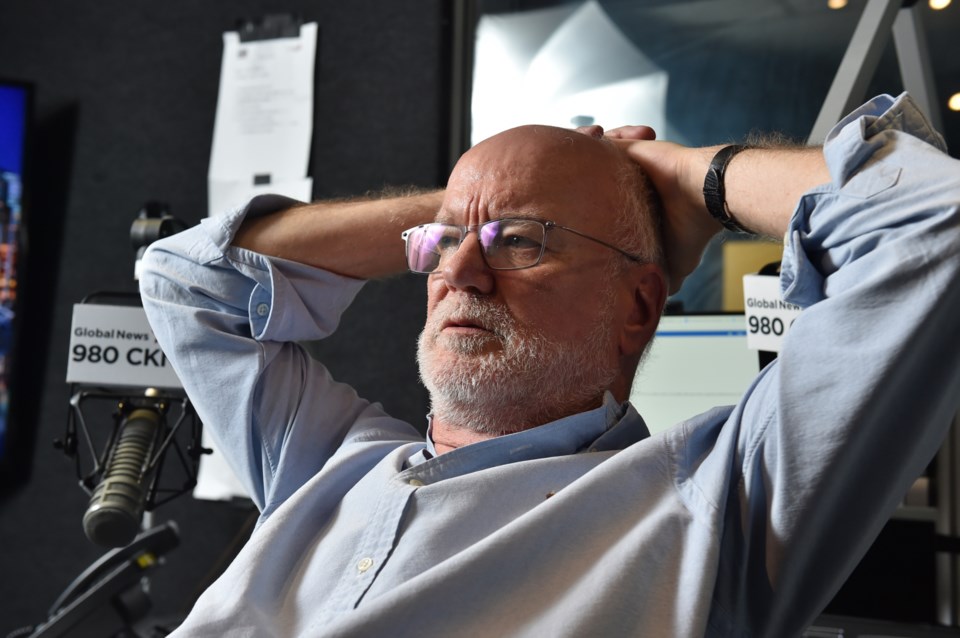 The voice is unmistakable.

As Jon McComb greets this reporter in the lobby of Corus Entertainment on West Georgia Street, no introductions are needed. It’s a voice that’s been heard on air for almost 50 years, first as a DJ, later as a news broadcaster and finally as a speaker and vocal advocate for people living with a mental illness.

McComb says his empathy for anyone living with a mental illness comes from his own struggles with anxiety and depression.

“It was around 2010, 2011 when I started talking about mental health and for all the reticence and fear I had at the time about anyone finding out, then they couldn’t shut me up,” McComb, says laughing.

On Dec. 1, McComb will have been with CKNW news radio, a division of Corus, for 35 years, the last five hosting the morning show — the early morning show he took over from long-time radio host Philip Till. McComb’s morning show team includes producer Pippa Reed, co-host Niki Reitmayer and tech producer Greg Schott.

“I leave for work at about 4:15, which means I get up at quarter after three,” says McComb. “I’m 65-years old and I tell you, sometimes when that alarm goes off at 3:15, it’s a huge challenge to get up. Before accepting the job, I described it to my wife as a total lifestyle commitment.”

McComb starts the day with a protein/vitamin energy drink, followed by a cup of coffee before getting behind the wheel to make the drive from North Vancouver, where he lives with his wife Kristin McComb. The couple shares four kids, five grandchildren and four cats.

“ALS is as brutal and unrelenting a disease as they say it is,” says McComb.

To that end, the family regularly dedicates time fundraising for those living with ALS, including the annual Hoops for ALS three-on-three basketball tournament in Maple Ridge organized by the couple’s son Neil McComb.

“The thing about this business is that after a while listeners get to know everything about you and they’ll ask, ‘How’s your son?’” says McComb. “They also ask, ‘How’s Phil?’ And for the record he’s just fine.”

And just as Till did for years, McComb talks politics and current affairs while on air.

“In a lot of ways I have a love/hate relationship with politics,” says McComb. “On one hand I’m really interested in trying to understand how the political process works and I try and convey that to the audience. On the other hand some of the things politicians and governments do drive me around the bend and I wonder how rational people can do some of the things they do.”

That’s one of the reasons McComb and other journalists from CKNW doggedly pursued answers from the B.C. Ministry of Health after it fired senior pharmaceutical researcher Roderick MacIsaac, who committed suicide months later in December 2012. MacIsaac was one of seven researchers fired by the ministry in September 2012, due to alleged misconduct related to data-management practices. MacIsaac and the other employees were wrongly told an RCMP investigation into their conduct was underway.

“Over my career I’ve taken politicians to task over various things, but this was one we dug our teeth into and we kept hammering away at the Health Ministry firing case,” says McComb. “That was a turning point in my career. That was when I first came out on air about my own depression and anxiety.”

Pursuing answers from politicians and governments is a long way from playing rock music at a radio station at age 17 in Tucson Ariz., where McComb went to high school. His first radio job in Vancouver was at CKVN in 1972 at 19, but he later worked in Portland and Montreal before heading west again and landing at CKNW in 1983.

“I eventually became a newscaster and left rock and roll behind because I thought all everybody wanted was news,” says McComb. “Who knew classic rock and Led Zeppelin would still be around today?”

And as for the future?

McComb isn’t sure how much longer he’ll be on air before deciding to retire. He notes wife Kristin would like him to retire as soon as possible so the couple can live a normal life — without the 3:15 a.m. alarm. But without him or not, McComb has faith the radio station and traditional media will be around for a long time to come.

“There will always be a demand for local news,” says McComb.