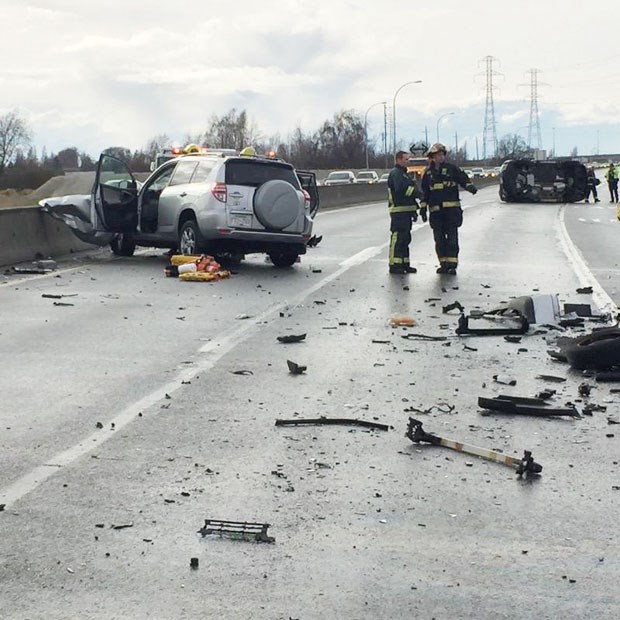 RCMP are asking for the public to come forward with information as they continue to investigate a serious three-vehicle accident that forced the closure of parts of Hwy. 99 late Sunday afternoon.Pat Heinekey

The driver who caused a serious three-vehicle accident on Sunday was in the wrong lane after exiting the Massey Tunnel, RCMP traffic services says.

Just before 4:30 p.m. on March 25, police received numerous 911 calls about a vehicle which was travelling southbound in the northbound lane on Hwy. 99. Many of the callers said the vehicle had travelled through the Massey Tunnel in the wrong lane.

Witnesses reported that an older model, grey Volkswagen Golf, collided head-on with a northbound, grey Toyota Rav 4, just south of the Hwy. 17 overpass in Delta. A third vehicle, a grey Honda Pilot was also involved in the collision.

The Volkswagen driver, a 26-year-old male from Vancouver, suffered life-threatening injuries. A passenger in the Toyota Rav 4, a 19-year-old female, suffered serious injuries, while the driver, a 48-year-old from Surrey suffered unknown injuries. All were transported to local area hospitals by paramedics. The driver and passenger of the Honda Pilot suffered minor injury and were treated and released at the scene.

Halskov said the driver from Vancouver remains in critical condition in hospital.

“Investigators have received good cooperation from witnesses and following our release Monday asking for more witnesses to come forward, several more have provided us with information, so we thank the public for that,” he said. “It is not definitive yet what led to this.”

The northbound lane of Hwy. 99 was closed for a number of hours while the investigation progressed, with assistance from the Integrated Collision Analyst and Reconstructionist Services (ICARS) and the Delta police.

RCMP are asking any witnesses who have not already spoken to police to contact Deas Island Traffic Services at 778-290-2400 and note file number 2018-949.