British Airways pilot films what it looks like from the captain's seat to touch down in Vancouver
Feb 19, 2018 6:12 PM By: Martha Perkins 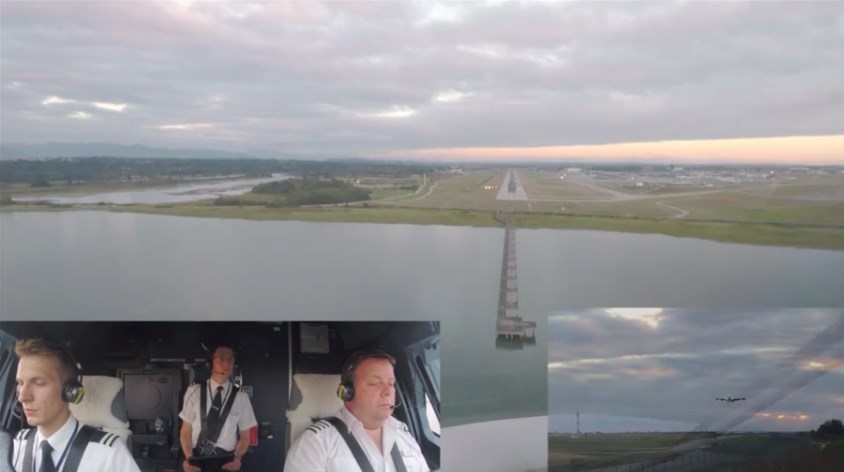 British Airways Captain Dave Wallsworth, right, has been sharing videos of his view as the plane lands. This time, someone was on the ground filming him, too.Screenshot/YouTube

The BA captain is proving very adept at giving people a stunning pilot’s-eye view of the process.

In September 2017, Wallsworth and his two first officers, Jon Leggett and Phil Macgregor, were behind the controls of an A380 as it landed in Vancouver.

“Lovely, innit?” Wallsworth can be heard saying in his video of the landing as the plane approaches the runway at YVR.

In an otherwise very calm and quiet landing, Leggett admires the view of the North Shore Mountains.

This is the third flight-deck video Wallsworth has posted on YouTube.

Unbeknownst to him, Vancouver plane spotter Kent Matthiesen was also taking a video of the landing — this one from the ground.

As Mattiesen films the perfectly smooth landing, Wallsworth’s video shows the three pilots being jostled just a bit in the cockpit.

The footage was combined to give people a three-part view of the landing: video taken from the cockpit of the runway, video of the three pilots in the cockpit and video from the ground of the plane as it touches down.

The Independent wrote a story last December on Wallsworth’s videos. Wallsworth describes how, in the days before 9/11, he was enthralled by the pilots who invited him into the cockpit to watch them fly the plane.

“I will always remember being in awe of what was going on,” he told the British newspaper. “And the views! I especially remember being invited to stay up for landing [as a child]. And I wanted to be able to give people the opportunity to see what we do and how we do it, as well as experience the superb views we are privileged to have.”

Wallsworth recently told the Independent that he plans to do another video of the YVR experience.

“It is a beautiful approach over the mountains on the way in; I hope to be able to film that later this year when BA returns there in the A380,” he tells the paper, which notes that a 747 is currently on that route with plans for the A380 to resume the service in May. “If the weather is kind and we see the spectacular mountains I’ll post a video of that for everyone to see.”