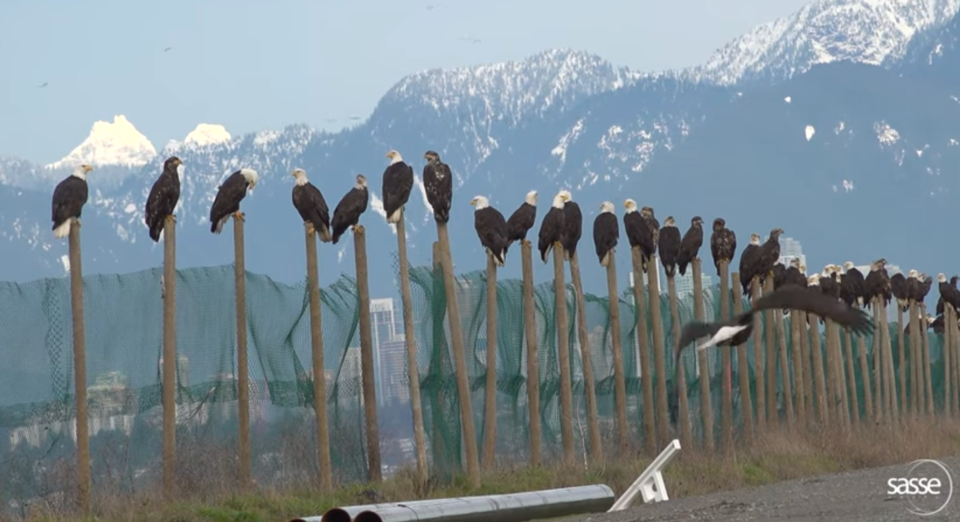 If you didn't get to see the world's biggest convocation of bald eagles in Harrison Mills in the Lower Fraser Valley of B.C. – don’t worry, chances are you’ll see them gathering at the Vancouver Landfill.

A video posted to YouTube on Tuesday by Vancouver photographer Christian Sasse highlighted just how many eagles will hang around the dump in Delta in search of an easy meal.

The short clip shows a number of the majestic birds perched along a fence, while others can be seen flying in the background.

“The aim of the project is to find out where eagles migrate and what their population numbers are,” Sasse explained.

“David often goes there to count the eagles and tag them. I went along and generally there are a lot of eagles."

He said eagles were very clever hunters and observed gulls and their movements to find where the food sources were.

“They come out of nowhere – and suddenly you have hundreds in a few minutes because they just watch everything. Their eyes are much, much sharper, than human eyes. They have a better perception of what’s going on and they see small details we can’t see.”

The Hancock Wildlife Foundation estimates that, in addition to 500 breeding pairs of eagles in the Lower Fraser Valley, over 35,000 eagles annually pass through from November to February.

Aside from hunting at landfills, the eagles gather near the river in Harrison Mills, about 100km east of Vancouver, in November to feast on salmon. Hancock told the Courier the eagles had now begun spreading out in the area because their food source was running out.

The beautiful birds can also be spotted near the shore along Boundary Bay.