Did Willie Desjardins cut Jake Virtanen's ice time because he hung out with Justin Bieber?
Mar 17, 2016 5:40 PM By: Daniel Wagner 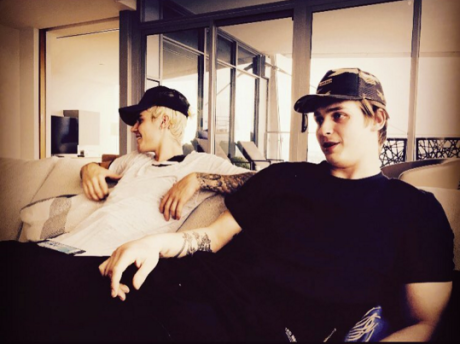 Jake Virtanen’s rookie season looks better the closer you look at it. On the surface, 7 goals and 13 points are pretty paltry production for a 6th overall pick, even if he’s still just 19 years old.

But he’s also the Canucks leader in corsi, when it’s a rarity for young rookies to put up positive possession numbers. His point totals also look better when you consider his limited ice time: his 1.46 points per 60 minutes is fifth on the Canucks, right behind Sven Baertschi.

Speaking of limited ice time, Virtanen played just 10:57 in the Canucks’ loss to the Colorado Avalanche. Also, Virtanen’s Instagram and Twitter accounts, which most recently hosted pictures of his night hanging out with Justin Bieber, have gone private.

Could these two events be somehow linked?!

That seems to be what some fans think, suggesting that Virtanen is being punished with diminished ice time after a late night out on the town with the notorious Bieber. Nevermind that Bieber has gone born-again Christian and renounced his rakish ways; it was apparently irresponsible for Virtanen to hang out with such a roustabout the night before a game.

Also, for this theory to work, ignore the 25 shifts and 16:18 he played against the Winnipeg Jets on Monday. Virtanen is being punished!

It’s entirely likely, of course, that Virtanen’s bro-down with Bieber is why he’s made his social media accounts private. The pictures he posted may have gotten more attention than the Canucks were comfortable with and they could have asked him to take that step. Or perhaps he did it himself after some negative feedback.

This is unfortunate, as it came not long after a recent Canucks video took a pause to promote the fact that both Jake Virtanen and Ben Hutton are on social media. Welp,

Is Virtanen’s Bieber buddy time responsible for his diminished ice time against the Avalanche? Probably not. But there’s a reason this story hasn’t withered on the vine, and it’s because WIllie Desjardins has no clue how to do public relations.

Willie Desjardins talked about the mistakes made by Jake Virtanen and Jared McCann (who also attended the Bieber concert, I believe), but when asked if they were on-ice mistakes or off-ice mistakes, Desjardins completely missed his opportunity to control the message:

asked to clarify whether the "mistakes" willie was talking about from mccann & Virtanen were on-ice, he said he was talking "all" situations

Here’s what “all situations” sounds like to many fans: “I don’t want to say it’s Bieber, but it’s Bieber.”

There are any number of things that Desjardins could have meant, but partly because he’s lost the trust of a large portion of the Canucks fanbase and partly because people love gossip and scandal, many will interpret it as the most inane and silly thing possible. The fact is that McCann has seriously struggled at times—he was 0-for-10 in the faceoff circle against the Avalanche, for instance—and Virtanen didn’t mesh well with the Sedins, leading to Desjardins trying some different line combinations. There are legitimate reasons why their ice time would be cut.

Desjardins needed to get out ahead of this story, saying something simple, like, “Virtanen and McCann have some things they need to work on defensively and improve their habits in practice.” It doesn’t have to be exactly that, but by giving such a non-answer it keeps the Bieber story alive.

Virtanen choosing this moment to protect his accounts probably didn't help either.