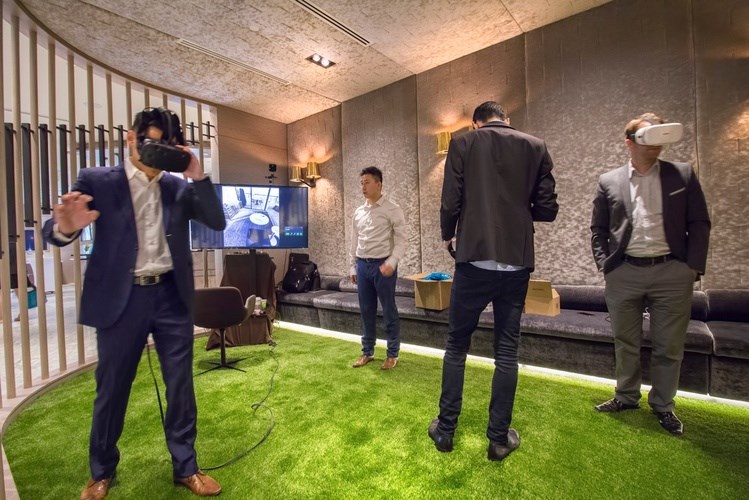 Concord Pacific’s Brentwood project used virtual reality to showcase its condos before any were built.

Free cookies and open houses might not cut it anymore for Vancouver real estate professionals trying to entice potential buyers who are increasingly dependent on augmented or virtual reality (VR) experiences.

The headset giveaways weren’t just a pricey upgrade on the free calendars or pens realtors usually hand out. LNG Studios spent weeks creating a lifelike virtual reality experience for the condo project before any physical walls were built.

The free headsets went to real estate agents and potential homeowners looking to walk through the condo pre-sales.

“Our first launch was in Shanghai and Hong Kong,” said Leon Ng, founder and CEO of LNG Studios. “So we gave away the headsets there so they could visualize the properties in Vancouver.”

His company originally specialized in developing 3D renderings and animations for real estate companies until two years ago when Ng saw greater potential for the real estate market to plug into VR.

“Concord was really the first mover, and after we got them on board, everybody kind of just started jumping in,” he said.

Concord Pacific spokesman Peter Udzenija told Business in Vancouver in an email the technology is “extremely useful” for both the developer and clients.

LNG Studios has since developed a second VR experience for a Concord project in Toronto (another pre-sales strategy) and held workshops last year with James K.M. Cheng Architects Inc. and Kasian Architecture.

“It’s more of a marketing/PR play right now for the developers,” Ng said. “For the architects, though, they are seeing a benefit in just visualizing the property.”

He added that his company is also working on VR projects for the Ritz Carlton Hotel Co., the Richmond Olympic Oval and Telus (TSX:T).

“We have so many buyers now coming from China and different places [and] they don’t even need to come here.”

Ryan is focusing his efforts on properties using a $7,000 Matterport camera that takes 360-degree scans of physical properties. The images are then stitched together to create a VR experience, distinct from the 3D digital recreations LNG Studios specializes in.

Meanwhile, a shipment of 50 VR headsets branded with Ryan’s name arrived at his office from China in late December.

“I’m going to be handing them out to clients,” he said, adding that LNG Studios is helping him launch listings in the coming weeks that offer VR tours through the headsets.

“They’ll be able to just put on their goggles and walk through [the property] from out of country.”

Realtor Alex Burns of Re/max Alliance Victoria, who owns VictoriaHomes.com Media, is also using the Matterport camera to stitch together virtual tours on his website for foreign buyers.

While Burns said VR technology will get more affordable, engineers in Richmond are already working on augmented reality technology for the real estate industry that doesn’t depend on expensive gear.

Augmented reality adds layers of digital images over smartphone screens or specialized headgear to give a new dimension to real life (think Pokémon Go or those Snapchat filters that are all the rage among young people).

California-based Realtor.com, which has its Android centre of excellence based in Richmond, is developing mobile applications that allow potential buyers to point their smartphone cameras at homes as they walk through neighbourhoods to get more info about properties for sale.

“We augment that camera view with information about those properties right on the screen as you move around so you can see the price, and the bedrooms and different things to do with the properties around your surroundings,” said Scott Rutherford, Realtor.com’s Android engineering manager. “This new feature is going to allow people to view homes that are for sale now as well as homes that are not for sale that have recently sold or that are not even on the market.”

Rutherford said his team is also working on a VR app that would allow users to roam neighbourhoods remotely by overlaying all the data on something like Google Street View instead of physically walking through a neighbourhood.

“The obvious next step,” he said, “is just sitting on your couch.”