Vision Vancouver may have new leader in place by Friday 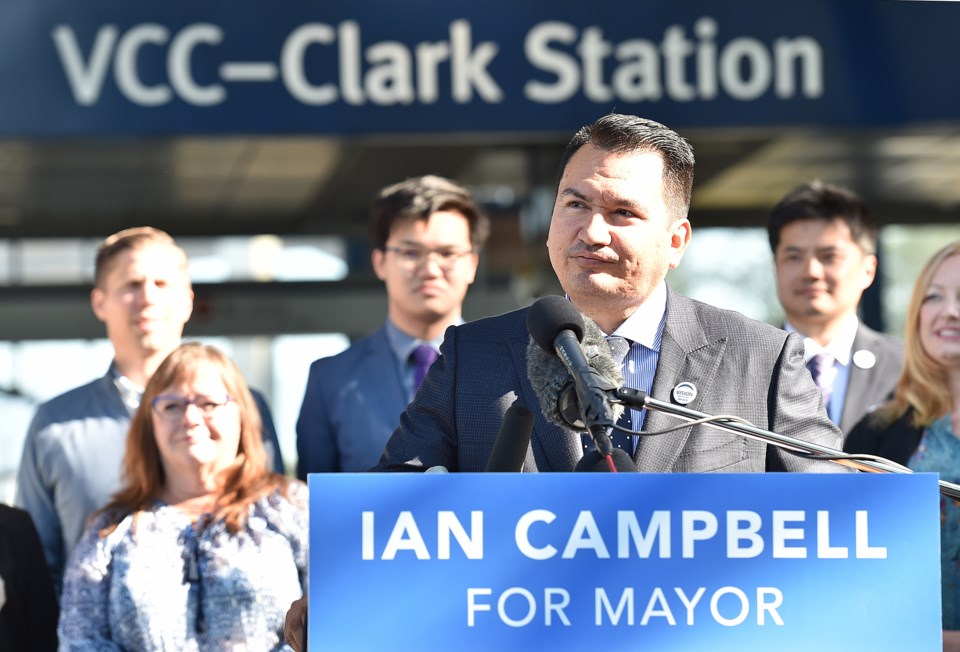 Ian Campbell shocked many Monday when he announced in a statement that he withdrew from the mayors’ race as Vision Vancouver’s candidate. The party says a new leader may be appointed by Friday. Photo Dan Toulgoet

The announcement Monday by Vision Vancouver's Ian Campbell to withdraw from the race to become mayor has the party scrambling to possibly name another leader before Friday’s deadline for candidates to file nomination papers with the city’s election office.

Ange Valentini, Vision’s executive director and campaign director, said Tuesday the party may also consider endorsing another candidate already in the race. She didn’t name those candidates, but independents Kennedy Stewart and Shauna Sylvester align with some of Vision’s values and policies.

The other option is not to run a candidate.

“There’s lots of conversations going on about whether the [Vision] board will appoint someone else to run for mayor,” Valentini said. “There are people asking us if they can join the team and run for mayor.”

She said some of the party’s board members and candidates have also proposed making space “for one of the independents to come on board, or actively throw support behind endorsing one of the other progressive candidates.”

Valentini confirmed that all 10 of its candidates for council, school board and park board will remain in the race, and the party planned to file nomination papers Wednesday at the city’s election office. One of those candidates is Heather Deal, the lone Vision council incumbent to seek another term.

“Apparently a lot of people are asking Heather Deal to run for mayor,” Valentini added. “She just texted me to ask me what she’s supposed to say to that one.”

Campbell, a hereditary chief with the Squamish Nation, surprised many Monday when he announced in an emailed statement that he had withdrawn from the race. He made the decision after reflecting on the “political landscape and my complicated personal journey.”

He was not made available by Vision to elaborate on his decision, nor did he return phone or email messages left by the Courier. Campbell’s decision was made five days prior to the Friday deadline for candidates to file nomination papers.

Valentini said she couldn’t comment further on Campbell’s decision, other than to say the party was disappointed. She spoke of Campbell’s qualities and experience as a leader, and that internal polling showed he was “doing really well and people in Vancouver were prepared to get behind him.”

“Seeking public office is a tough decision, it’s tough on their families and people make their own calls and there’s not much we can do about that,” she said.

News of Campbell’s decision shocked Ian Baillie, a longtime advisor to Vision Vancouver and the party’s executive director from 2009 to 2011. Baillie was involved in the party’s campaign in 2008 when Vision boasted close to 20,000 members.

He pointed out the party won every general election since 2008. He said Campbell’s withdrawal from the race, coupled with the fact the party is running only one council incumbent in Deal, “doesn’t leave much of a party, to be honest.”

“We’re talking about political realities here — the party’s not in a good position,” he said, noting 10 years is a long time to govern. “There’s nothing you can say, frankly, otherwise with any credible voice. It’s quite amazing.”

Campbell’s departure comes as a new public opinion poll released Tuesday put Stewart as the frontrunner in the race for the mayor’s chair, with Sylvester and the NPA’s Ken Sim trailing closely behind.

The poll was conducted before Campbell’s announcement. With him out of the race, it would appear the campaigns of Stewart and Sylvester will gain some momentum on the centre-left side of the political spectrum, although neither candidate would speculate on the effect of Campbell’s departure.

“It came as a real surprise, and I’m still really digesting it,” Stewart said. “It does change the race significantly, but it really doesn’t change what I’ve been doing. Yesterday, we had a major housing announcement and again I’m getting up today and getting ready for the second part of my housing announcement tomorrow morning.”

Sylvester, who described Stewart as an NDP mayoral candidate because of his years as an NDP MP in Burnaby, said she respected Campbell for his decision but didn’t expect him to withdraw from the race, noting “he was carrying the Vision council candidates with him.”

“I don’t know what it does for my campaign,” she said. “But anytime a candidate decides to withdraw, people will be looking to where they want to put their support. I hope that they will look at the platform I put forward, the way in which I’m undertaking this campaign and that they will see themselves in that platform.”

CBC municipal affairs reporter Justin McElroy reported Tuesday that retiring Vision councillors Kerry Jang and Tim Stevenson are supporting Stewart’s run for mayor. The Courier contacted Jang via email but he replied in a series of emojis, which didn’t confirm his allegiance to Stewart.

Campbell’s decision has led to speculation that Green Party Coun. Adriane Carr, who was a frontrunner in public opinion polls earlier this year to become mayor, would change her mind and run for the top job instead of re-election as a councillor.

Carr told the Courier Tuesday that she filed her papers Monday with the election office to seek re-election as a councillor. The Green Party is not running a mayoral candidate and has said it will not endorse anyone for mayor.

“I was a bit surprised, but not fully surprised,” said Carr of Campbell’s decision. “He’s got to be hearing what I’m hearing and what my team is hearing in the community — people are not supporting Vision.”

Both Baillie and Carr say a combination of low vacancy rates, high rents and the price of housing reaching stratospheric heights have angered residents. They pointed out much of this has happened under Vision Vancouver’s watch, though acknowledged provincial and federal governments have a big part to play in creating affordable housing.

“Housing has been the political killer of the last year,” said Baillie, noting the issue was top of minds for voters in the last provincial election that elected the NDP-Green government in Victoria. “Obviously the public is incredibly frustrated.”

Added Baillie: “If you’re the mayor, if you’re the premier—one of these people in positions of authority—and there are these big problems going on in society, people expect you to act and come up with some plans to solve it. And when you don’t, they punish you.”