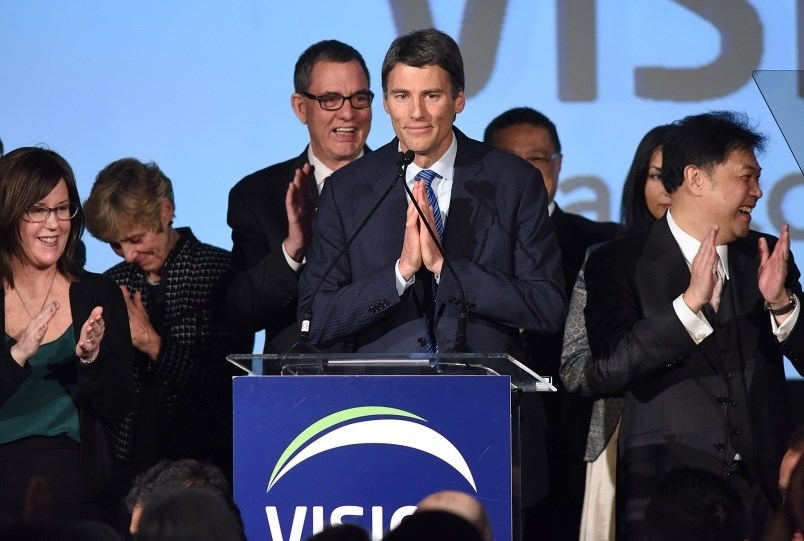 Vision Vancouver will not have a leader going into the Oct. 20 civic election, but the party may endorse independents Kennedy Stewart or Shauna Sylvester. Gregor Robertson is retiring after this term. Photo Dan Toulgoet

The party issued a news release Friday afternoon saying that it had not found a replacement for Ian Campbell, who was Vision’s mayoral candidate until he withdrew Monday from the race.

“After considering all the options, and listening carefully to party members and progressive voters, Vision Vancouver has decided we will not field a mayoral candidate,” said Ange Valentini, the party’s executive director and campaign director. “This was a difficult decision because we believe our chances would have been very good, but we believe this decision is the right decision for our city.”

Added Valentini:“Vancouver residents are fortunate to have two other excellent candidates for mayor in Shauna Sylvester and Kennedy Stewart and running another mayoral candidate at this late date creates too much risk that the NPA or one of the other right-wing parties would win and take Vancouver backward.”

Longtime Vision councillor, Andrea Reimer, announced earlier this week that she was reconsidering her decision to retire and possibly replace Campbell as the candidate.

Campbell, a hereditary chief with the Squamish Nation, withdrew from the race after reflecting on the “political landscape and my complicated personal journey.”

Reimer posted a statement Friday to her Facebook page, saying in part that she didn’t want to weaken the so-called progressive vote.

“After very carefully weighing this decision, there is no question that it weighs towards running if taken simply on the merits of what’s best for the progressive policies I’ve championed for the better part of two decades,” she wrote. “At the same time, there are two candidates running who echo substantial parts of some of the policies I’ve championed, and while lacking a party backing makes it harder for them, another candidate won’t help.”

She didn’t name the two candidates, although the values and policies of independents Stewart and Sylvester are in line with many of those promoted by Vision Vancouver, as Valentini alluded to in the party’s news release.

When news broke Monday of Campbell’s departure, Stewart and Sylvester were coy about what the sudden loss of a candidate on the centre-left of the political spectrum would do for their chances to become Vancouver’s next mayor.

Stewart: “It does change the race significantly, but it really doesn’t change what I’ve been doing.”

Sylvester: “I don’t know what it does for my campaign.”

In its history, Vision has only run two people for mayor—the late Jim Green in 2005 (he lost to the NPA’s Sam Sullivan) and Gregor Robertson, who was elected in 2008 and re-elected in 2011 and 2014. Robertson announced in January that he was retiring after this term.

Stevenson and Jang announced this week they were supporting Stewart for mayor. Stevenson is a former NDP cabinet minister and Jang has been a staunch NDP supporter.

As of Friday, Stewart was still the NDP MP for Burnaby-South, a riding that federal NDP leader Jagmeet Singh hopes to win in either a byelection or the next general election.

Vision will run three candidates for school board and two for park board. In 2008, the party boasted almost 20,000 members. This year, it has about 2,000, according to a party official.