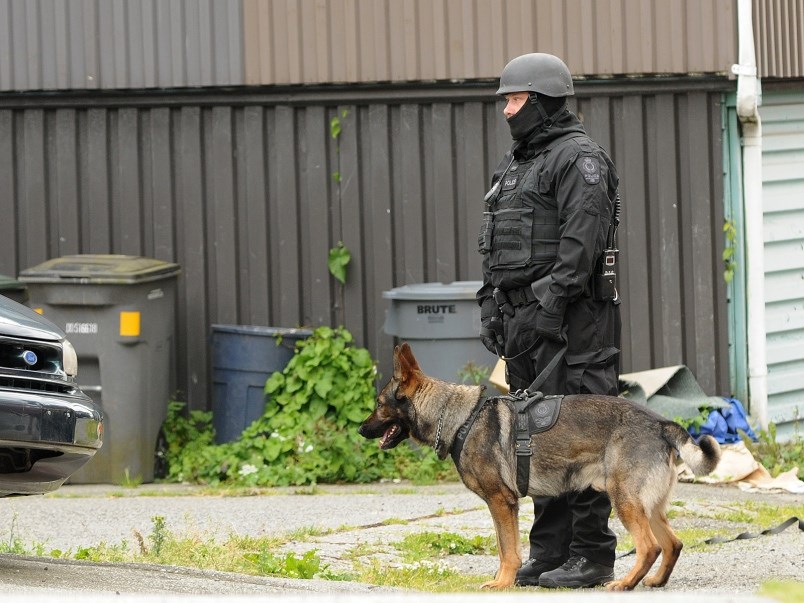 Vancouver police are reviewing how one their police dogs mistakenly bit a 75-year-old man in the parking lot of the former Fraser Arms hotel. Photo Dan Toulgoet

A 75-year-old man was mistakenly bitten in the leg by a Vancouver police dog Tuesday while officers were attempting to arrest three suspects in connection with a burglary to a home on West 37th Avenue near Granville Street and another break-in in Maple Ridge.

Const. Jason Doucette, a VPD media liaison officer, wouldn’t discuss the extent of the man’s injuries but said he required treatment in hospital before being released. The man was in the parking lot of the former Fraser Arms hotel on Southwest Marine Drive, near Granville Street, and was exiting his truck at about 5:30 p.m. when he was bitten.

“We feel very badly about that, and I can tell you the dog handler himself is affected by this," said Doucette, noting a VPD dog biting an innocent person is rare in the estimated 7,000 calls per year answered by the force’s team of 15 German Shepherds. “Our main priority now is for this man to get healthy and we’re providing him support in any way we can.”

The incident occurred after police pulled in behind a pickup truck in the parking lot of the former Fraser Arms hotel. The truck and suspects matched the description given to police from a witness to a burglary about an hour earlier on West 37th Avenue, Doucette said.

Police arrested two of the suspects in the parking lot but a third man fled and tried to get into a taxi full of people. As he did this, police had released a dog to chase and apprehend the suspect, Doucette said.

“As part of training, the plan was to deploy the dog to immediately affect the arrest,” he said. “Somehow, the 75-year-old man got in between the suspect and the dog.”

The handler called off the dog, police administered first aid on the man and called paramedics, Doucette said. The suspect continued across Granville Street, where he was able to force the driver of a Mercedes out his car at a gas station. Police, using a second dog, were able to arrest the suspect before he could drive the car away.

The suspect also required a trip to the hospital to be treated for a dog bite.

Police recovered stolen property from the suspects but didn't disclose the contents.

Doucette said it would be a management decision on whether the dog that bit the innocent man would continue to be on duty. He said Tuesday’s incident is under review by the department and will be forwarded to the VPD’s professional standards unit and the Office of Police Complaint Commissioner.

Added Doucette: “Our goal here is to arrest the bad guys and to ensure public safety. In this situation, something didn’t go as planned, and we’re going to try to identify what happened here and how we can prevent it in the future.”

The Courier contacted the Independent Investigations Office Tuesday to determine whether it was investigating the incident, but had not heard back before the posting of this story. Doucette said he believed the injuries to the 75-year-old man did not meet “the threshold” of the IIO, the organization tasked with investigating police incidents involving death or serious harm.

“This is very rare, and we’re sorry that it happened,” he added.

The last publicized case of a VPD dog biting an innocent victim occurred Sept. 19, 2016 in New Westminster. Vancouver police were attempting to arrest suspects connected to a kidnapping and homicides at a house on Dieppe Place, near Grandview Highway and Boundary Road.

During the arrest, Vick Supramaniam had a portion of his ear torn off by a VPD dog. The dog also grabbed the man’s leg and pulled him down a hill. Police apologized to Supramaniam. The IIO announced July 31 “the actions of police were justified, and thus does not consider that any police officer has committed an offence under any enactment.”

Provincial rules that came into effect in September 2015 require all officers to complete a detailed report for each bite incident, take photographs of injuries and provide related data to the police services division of the Ministry of Justice.

The standards, which were the first of their kind in Canada, also require annual testing of every dog handler team. That includes dogs demonstrating their ability to be called off a suspect, remain under control while biting and promptly release a bite upon hearing a handler’s command.