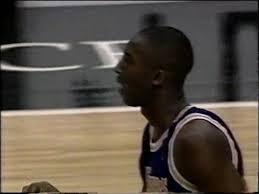 Check out a rookie Kobe Bryant of the L.A. Lakers on the court in Vancouver against the Grizzlies in 1997:

"The jumpy and springy rookie Kobe Bryant records one of his best first year games at Vancouver," notes the video of the Jan. 5, 1997 game.

The retired NBA star was on his way to a game at his sports academy when the crash occurred.