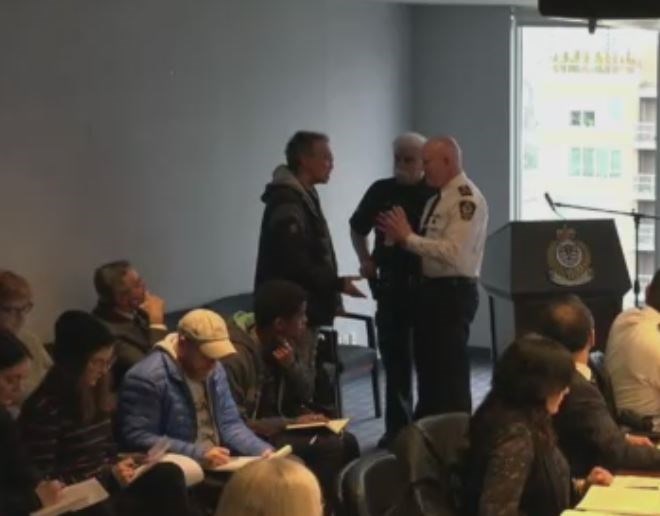 A visiting deputy police chief from Ohio got a front-row seat Thursday to watch Police Chief Adam Palmer do what so many of his officers do on a daily basis—calm down an agitated person and address his concerns without using force.

Deputy Chief Thomas Quinlan was seated in a chair behind Palmer at Thursday’s Vancouver Police Board meeting when an agitated man sitting on the other side of the room began shouting at the chief and Mayor Kennedy Stewart, who is chairperson of the board.

“I’m fighting for my life right now because I’m being murdered by a directed energy weapon that’s being used on me by Adam’s police force,” he said. “Adam knows who’s doing this…”

(See video below. Incident begins at 26:46 mark. Quinlan is seated behind the chief.)

Stewart told the man, whose first name was Murray, that the time to speak to the board was at the beginning of the meeting, which took place in a boardroom at the Cambie Street police precinct. The room was full of high-ranking officers, police staff, one of the mayor’s chiefs of staff, journalism students and a Courier reporter.

Palmer interjected and called the man by his name. Then the chief stood up and walked over to Murray, saying “it’s OK, it’s all good,” shook his hand, patted him on the shoulder and asked him to step out of the room so they could talk.

“You and I will chat and we’ll figure out a plan, OK,” the chief said, as another officer stood by. “Does that sound good?”

The man agreed and the meeting continued.

Quinlan, who works out of the Columbus police department, jotted some notes in a pad and leaned over to another officer and remarked how well the chief handled the incident. Quinlan is in Vancouver as part of the Major Cities Chiefs Police Association program where police from North American big city police departments share information and get mentored by chiefs.

In 2013, Vancouver officers were dispatched to 125,785 calls for service, with more than 15,000 involving a person living with mental illness as a suspect or a victim, and where a person’s mental health played a factor in the incident.

The number of calls has escalated since those statistics were released in a VPD report.