Retired librarian, archivist and West End resident Ron Dutton says the city’s queer communities have many milestone anniversaries to celebrate now and in the near future, including the 35th anniversary of Pride this month.
Jan 20, 2014 1:35 PM By: Sandra Thomas 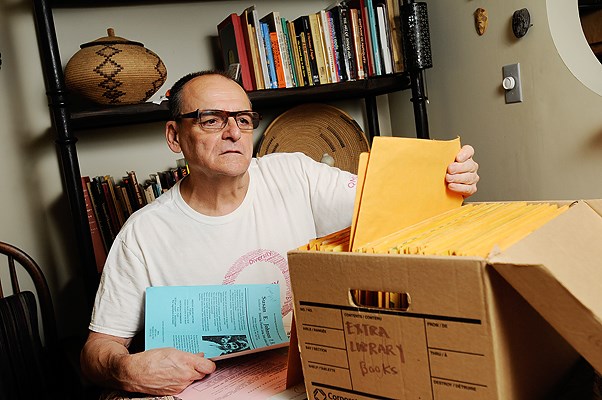 Ron Dutton sorts through some of the 750,000 items in his B.C. Gay and Lesbian Archives. Photo: Dan Toulgoet.

Retired librarian, archivist and West End resident Ron Dutton says the city’s queer communities have many milestone anniversaries to celebrate now and in the near future, including the 35th anniversary of Pride this month.


But, Dutton added, depending  on whom you ask there are several dates that could be considered the definitive start of the Pride movement in Vancouver.


“The earliest celebration was a picnic in 1972,” said Dutton. “And then there was the first picnic in Stanley Park and the first protest at the courthouse. But in 1978, there was a picnic in Nelson Park and a short march down Thurlow to Pacific, which I think is what they’re marking this year. The first official Pride Parade was held in 1981 and the Vancouver Pride Society was formed in 1980.”


Ray Lam, general manager of the Vancouver Pride Society, said as the result of the 35th anniversary the organization has worked hard to make this year’s events as accessible as possible. He noted the Aug. 2 Davie Street Dance Party will include one alcohol-free block where youth and party-goers who don’t want to drink can also celebrate Pride.


“We’re also offering the Clean, Sober and Proud Party where people can still celebrate and not be surrounded by alcohol,” said Lam. He noted the Legacy Awards, taking place July 20, is a new event that will recognize eight recipients with community-service awards.


Dutton noted the reason there are so many landmark anniversaries taking place within a relatively short amount of time in Vancouver is that many major events and associations took place or were formed as the result of the gay-rights movement. This year marks the 30th anniversary of AIDS Vancouver, the 35th anniversary of the opening of Little Sisters Book & Art Emporium and the 25th anniversary of Out on Screen.

Dutton began his collection at the height of the gay rights-movement, which he said coincided with political activism across Canada and the United States, including women’s and civil rights.


“In the case of the LGBT communities in Vancouver, everyone was running full tilt,” said Dutton. “Everyone was holding ‘rap’ sessions, writing manifestoes and making protest signs. It was a history-making moment, but at the same time no one was documenting it.”


To that end Dutton has spent the past 40 years amassing a huge collection of photos, newspapers, posters, magazines, association newsletters, government and academic research reports, personal papers, CDs, DVDs and even flyers found on car windshields dedicated to gay and lesbian events from this province’s queer communities. The entire 750,000-item collection included in the B.C. Gay and Lesbian Archives is stored in the two-bedroom, West End apartment Dutton shares with his long time partner.


It’s testament to Dutton’s experience as a librarian that the massive collection isn’t spilling onto every surface of his home. In fact, the apartment is surprisingly tidy and clutter free, with the exception of the walls, which are covered in art and ornate masks of all descriptions.


His training as an archivist is also apparent as he explains his filing system. He uses the queer newspaper Xtra! West as an example.


“I keep one complete copy,” said Dutton. “And then I break another copy down into specific categories and file them accordingly.”
Dutton insists he is not the owner of the collection, but rather the “custodian.” His dream is to see the archives housed in a professional, temperature-controlled setting, possibly within a dedicated space such as Qmunity, the Bute Street-based resource and training centre for the city’s lesbian, gay, trans, bisexual and queer communities.


As much as Dutton would like to see his collection taken on and properly cared for professionally, he has no desire to donate it to a large university or city-run facility.


“It’s not that they won’t do a good job of caring for it, because I know they would,” said Dutton. “But whenever I think about that I picture the last scene from [the movie] Raiders of the Lost Ark. After they finally discover the lost Ark of the Covenant the camera focusses in on it and as it pans back and you can see it’s being deposited into this massive warehouse and you know no one will ever see it again. That’s my biggest fear.”


Anyone with archival material they’d like to pass on to Dutton can make an appointment by calling 604-669-5978 or email rondutton@shaw.ca. If desired, anonymity will be respected.