A group of West End seniors is against a proposal of replacing a bus stop with a community parklet.
Feb 15, 2020 11:28 AM By: Drew Clarke 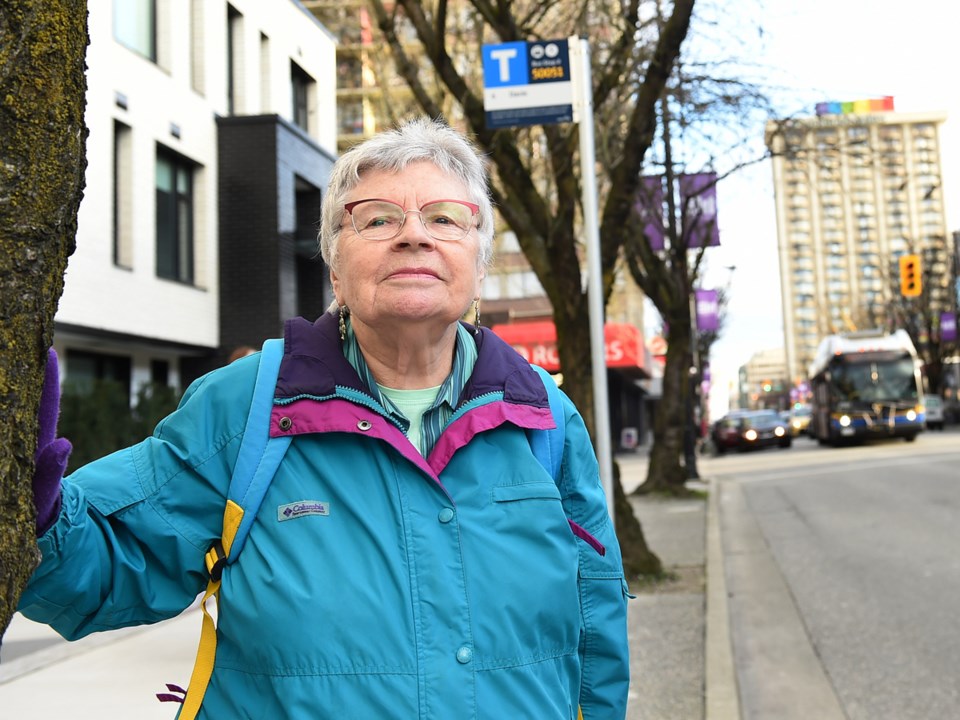 West End resident Ann Hunter is concerned about the potential loss of the bus stop near Davie and Jervis. Photo Dan Toulgoet

A group of West End seniors is against a proposal of replacing a bus stop with a community parklet. The site, located at Davie and Jervis, is used by many seniors, who voiced their concerns at a “community conversation,” hosted by the West End Business Improvement Association (WEBIA) at Gordon Neighbourhood House, Feb. 11.

Parklets are street-level platforms that include public seating, landscaping and/or bike parking. According to the City of Vancouver, the purpose of the parklets is to widen sidewalks, expand public space and foster social life. Vancouver currently has 18 parklets and seven commercial curbside patios.

Representatives from WEBIA and the City of Vancouver presented their vision for the transformation of the current bus stop.

Stephen Regan, executive director of WEBIA, reasoned that Davie has five bus stops over a five block stretch — at Burrard, Thurlow, Bute, Jervis and Broughton — and the trade-off of losing one bus stop could have a net benefit for the whole community.

However, many seniors attending the meeting voiced opposition to the plan.

After the meeting, West End resident Ann Hunter expressed concern about the potential loss of the bus stop. “The West End Business Improvement Association really want to put these parklets in and make our city look beautiful, I understand. But they have no idea of the human impact, no feeling for the people this would inconvenience.”

She gestured to the walking stick slung over her forearm. “There’s quite a large number of seniors, you know — a lot of them like myself, with canes, walkers or wheelchairs.”

Anthony Kupferschmidt, executive director of the West End Seniors’ Network, explained the central concerns expressed during the meeting. “There’s a high proportion of seniors in this neighbourhood, many with disability and mobility issues, so any risk of losing that important transportation connection is viewed as very problematic.”

He then ran over to a senior on a mobility scooter, who’d become stuck halfway onto the sidewalk. “You need a push, Sheila?”

He returned, adding, “The other part of the issue is that there is a need for more seating. Seniors have a hard time getting from point A to point B, without knowing there’s somewhere they can rest along the way. But to make that happen, you shouldn’t have to put a parklet in, and certainly not at the cost of a bus stop.”

A second public consultation will be held at Gordon Neighbourhood House, Feb. 20, 6:30 p.m.