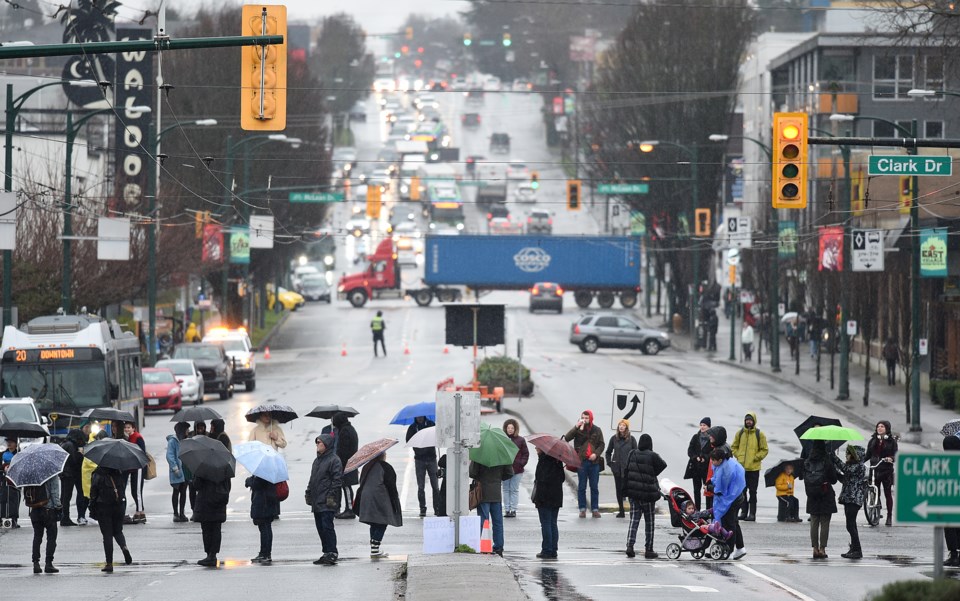 For the third straight day in a row, protestors supporting First Nations opponents to a natural gas pipeline in northern B.C. are blocking access to the Port of Vancouver.

The blockade, which has closed down the intersection of Hastings and Clark, as well as Powell and Heatley, and Commissioner and McGill, is also affecting traffic on Highway 1.

The first protest started Thursday, hours after RCMP officers near Houston, B.C. moved in to enforce a court injunction ordering members of the Wet’suwet’en and supporters remove a blockade stopping access to a natural gas pipeline work site. Six people were arrested.

“The RCMP have no jurisdiction, period. Wet’suwet’en land is unceded, it’s never been taken over by conquest, the land has never freely been given as a gift, the land has never been sold. So, they literally have no jurisdiction,” protestor Herbert Varley told the Courier Thursday. “One thing that’s easy to forget if you’re not indigenous to these lands, is that colonization isn’t something that happened 150 years ago; it’s going on today. It’s going on in Wet’suwet’en.”

Varley said blocking access to the port is meant to send a message to government.

“Every 15 minutes that goes by, we’re delaying tens of thousands of dollars of goods that go through this port,” he said. “What we’re here to do is put a strain on the economic system of what we now call Canada because the only thing that the government understands is economic pressure.”

Protestors and supporters are also planning a rally at Vancouver City Hall Sunday starting at 1 p.m.

The protests in Vancouver are among several taking place around B.C. and across Canada.

On Saturday, Wet'suwet'en supporters who have been camped out at the B.C. legislature since Thursday lit a ceremonial fire on the front steps of the building.

A spokesman for the group says the fire is contained within a steel fire pit on the front steps of the building where dozens of people wrapped in blankets and sleeping bags spent the night outdoors.

Kolin Sutherland-Wilson says the presence of a large pile of chopped firewood and a sleeping area near the legislature's ceremonial entrance indicates people could be planning an extended stay.

In Ontario, protestors have stopped railway traffic east of Toronto.

Meanwhile, the RCMP say several of their vehicles have been damaged by metal spikes at a protest site where people are opposing the Coastal GasLink pipeline in Wet'suwet'en nation near Smithers.

Four people were arrested by RCMP on Friday as demonstrators continued to access the site and organize blockades.

Mounties say the vehicles were damaged when they entered a court-ordered exclusion zone for protesters on Friday night.

-  With files from Drew Clarke and The Canadian Press