What can the Canucks do with Loui Eriksson?

When Loui Eriksson signed his six-year, $36 million contract, it came with certain expectations. Fans and management alike were hoping Eriksson would find the same chemistry with the Sedin twins that he had shown in international competition.
Jul 12, 2019 5:35 PM By: Daniel Wagner 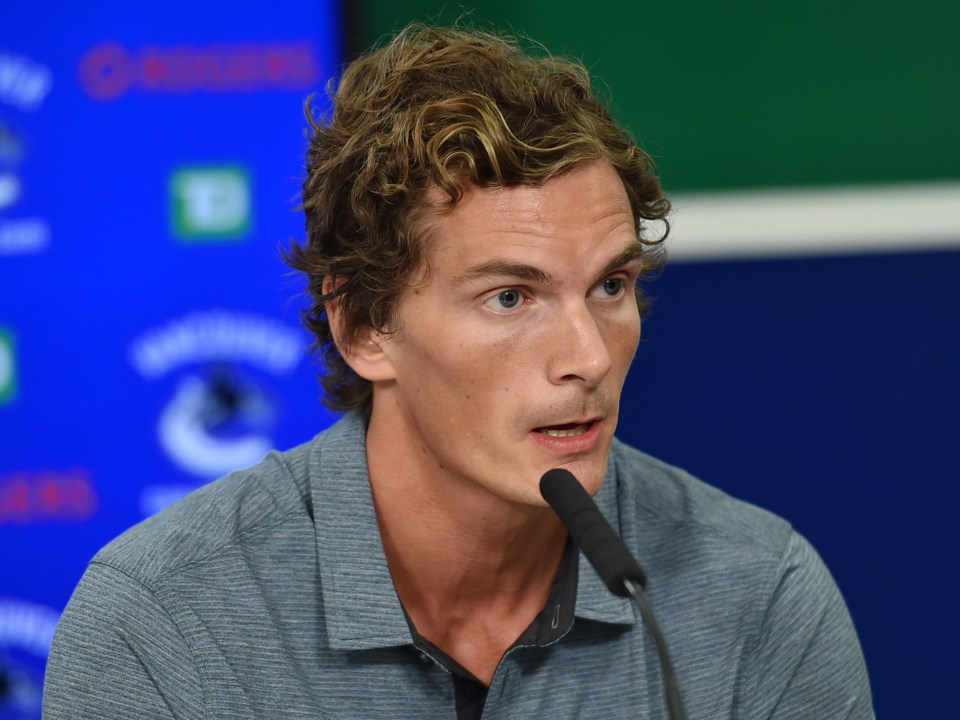 When Loui Eriksson signed his six-year, $36 million contract, it came with certain expectations. Fans and management alike were hoping Eriksson would find the same chemistry with the Sedin twins that he had shown in international competition. Jim Benning has stated that he expected Eriksson to be “a consistent 20-goal scorer.”

Even most of those cynical about the length of Eriksson’s contract thought he would be a valuable addition to the lineup for at least the first few years of the contract, even if his play was likely to decline in the final years of the deal.

Instead, Eriksson has been a tremendous disappointment. Instead of 20-goal seasons, he’s given the Canucks 32 goals total across the first three seasons of his contract. He’s been given ample opportunities to find chemistry in a top-six role — he started the season on a line with Elias Pettersson and ended it on a line with Bo Horvat — but it never quite clicked and he was frequently shunted to the fourth line with the likes of Jay Beagle and Tyler Motte.

It’s not an ideal situation for anyone. The Canucks are in a salary cap crunch in large part because of his contract, while Eriksson has expressed his frustration that he hasn’t always been used in an offensive role by head coach Travis Green.

Benning recently spoke to Eriksson about his remarks about Green and said, “I don’t think his comments were as egregious as people think.” Perhaps there was something lost in translation, but there’s no denying that no one is happy with the current situation, least of all Canucks fans.

What should the Canucks do with Eriksson? Let’s go over their options, because there are more than you might expect.

This is unlikely to be a popular option, but the Canucks can just grit their teeth and keep putting Eriksson on the ice. While he’s obviously not playing up to the expectations of his cap hit, Eriksson is still an effective NHL player.

Eriksson is particularly effective on the penalty kill, which plays to his strengths: positioning, reading the play, and moving the puck up ice without worrying about creating a good scoring chance at the other end. In fact, Eriksson isn’t just a good penalty killer: he’s one of the NHL’s best. 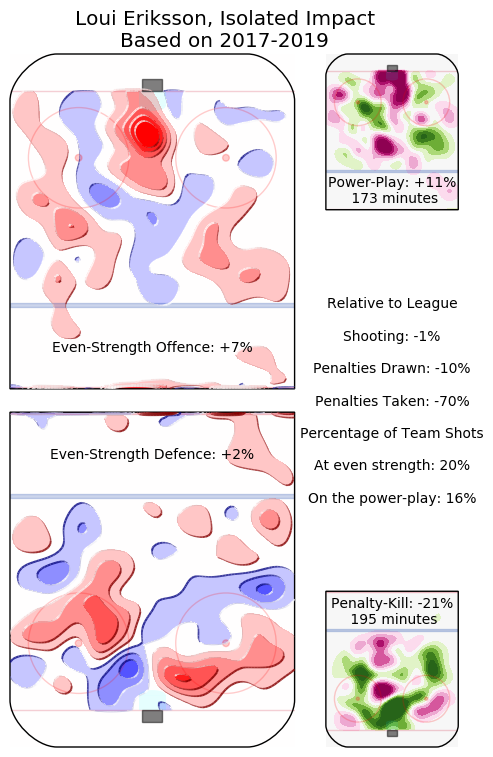 At even-strength, Eriksson doesn’t do much scoring himself, but can play in a checking role and generally moves the puck in a positive direction. His numbers from last season alone aren’t as positive as his heatmap over the last three years shown above, but he doesn’t actively make the team worse when he’s on the ice at 5-on-5, contrary to what some Canucks fans might think.

Of course, he’s also 33 and has already shown signs of declining play; it wouldn’t be surprising to see him get even worse next season.

This would an ideal situation for Eriksson, whose agent told TSN 1040, “Loui’s an NHL player. There’s a lot of teams that would like to have him if his cap number weren’t what it is.”

That’s the sticking point: Eriksson’s cap number is what it is. Eriksson has one of the worst contracts in the NHL and no team wants to take on that contract. At least, they wouldn’t without a sweetener added to the deal, or another, even worse contract going back to the Canucks, or without the Canucks retaining half of his cap hit in addition to one of the other two things.

That makes a trade difficult to pull off for Benning and the Canucks. They would have to avoid giving up good prospects and high draft picks that they’ll need in the coming years as a young team trying to move towards playoff contention. They also have to avoid worse contracts that would entangle their cap situation even more in the future.

A trade might make more sense next off-season, particularly if he has a better year. By that time, most of his hefty signing bonuses will have been paid out, making him a little more palatable for a cash-strapped, but cap-rich team.

Stick ‘im in a stew

Stick him in the AHL

One option bandied about by Canucks fans is putting Eriksson on waivers and sending him to the Utica Comets in the AHL. There are a couple issues with this plan.

The first issue is that sending Eriksson to the AHL wouldn’t actually clear up much cap space. There is a limit on how much of a player’s contract can be buried in the minors, thanks to what has been dubbed the “Wade Redden rule.”

Redden was buried in the AHL by the New York Rangers for the last two years of his six-year, $39 million contract. That cleared his entire $6.5 million cap hit off the books and made him the highest paid player in AHL history. The issue was that he was still an NHL-caliber player and the situation didn’t sit right with the NHLPA or other NHL teams.

The Wade Redden rule only allows a certain amount of a contract to be buried in the minors: league minimum plus $375,000. For the 2019-20 season, that amount will be $1.075 million. The rest of a player’s cap hit still applies to the NHL team.

For Eriksson, that works out to him still having a $4.925 million cap hit, while he’s still paid his full $6 million salary to not play for the Canucks.

Another issue is it sets an unpleasant precedent for future free agents, who might not like to see a big-name free agent signing get shunted to the AHL halfway through his deal. That’s particularly true when you consider many Canucks fans have proposed sending Eriksson to the AHL in hopes that he’ll retire while riding buses in the minors.

Does that mean waiving Eriksson and sending him to the AHL is off the table? Not necessarily, but it does mean that it’s a complicated option with a lot to consider.

Loan him to Sweden

Perhaps Eriksson would be happier playing in the SHL to finish off his career. If he’s frustrated with his role with the Canucks, I’m sure he could play on a first line somewhere in Sweden.

There is a provision in the collective bargaining agreement (CBA) for loaning a player to a team outside North America: 11.19. There are a couple issues, however: it’s something that’s meant to be a clause in a contract when it is signed, not added in after the fact. Would it be possible to still loan Eriksson to a European club even though it’s not a clause in his contract? I’m not sure. Perhaps if he agreed to it, but Eriksson surely still wants to play in the NHL.

What I do know is that the cap relief wouldn’t be any different than if he was sent to the AHL. In other words, the Canucks would still only get $1.075 million in cap relief, with even less incentive for Eriksson to retire. At best, the Canucks might be able to get a European team to pay a small portion of the actual money owed Eriksson, but the cap hit wouldn’t change.

So, loaning Eriksson to a Swedish team would have the exact same downsides as sending him to the AHL, with even less likelihood of happening.

A buyout is a pretty typical solution to an overpaid, underperforming player. So, why don’t the Canucks just buyout Eriksson’s contract and solve the problem?

In other words, the Canucks would save less than $500,000 off the cap over the next two seasons: they’d be paying him over $5.5 million to not play for the Canucks and he’d take up the same amount off the salary cap. It would give them a little more relief in the third year, which would be the same year Elias Pettersson, Quinn Hughes, and Thatcher Demko need new contracts, so there’s some benefit, but not much.

That’s far from ideal. Remember, someone else would have to take Eriksson’s spot on the roster and the amount they’d save off the cap by buying him out wouldn’t even be enough to pay a player league minimum.

They’d have the same issue if they waited until next offseason to buy out Eriksson: he’d have a cap hit over $5.6 million for the 2020-21 season, which means even less cap savings.

That hurts. Eriksson isn’t the only player with a buyout-proof contract — Milan Lucic’s contract is similarly laden with signing bonuses — but it means the contract is even worse than it looks at first glance.