Where can Bo Horvat go from here?

Life is pretty good right now for Bo Horvat. He’s coming off a career year, he’s a couple months away from (probably) being named captain of the Canucks, and he just got married to fellow elite athlete and longtime sweetheart, Holly Donaldson.

What’s next for the 24-year-old centre?

That’s the key question facing Horvat next season. He’s progressed forward every season, particularly in his goal totals and steadily-improving defensive play, but can he get even better?

Horvat’s drive to improve is his best attribute, taking him from what seemed like a reach at ninth overall in 2013 to one of the most important players in the Canucks rebuild. His skating went from a weakness when he was drafted to one of his biggest strengths. Already strong on faceoffs as a rookie, he’s now one of the best in the league, leading the NHL in faceoff wins last season. And, when called upon to play shutdown minutes when Jay Beagle and Brandon Sutter were injured last season, Horvat thrived in the role.

You can actually make the argument, however, that Horvat has hit a wall offensively and may not have much room for improvement. That may sound odd, given he just set new career highs in goals, assists, and points, but Horvat’s production at even-strength actually took a step backwards.

The above are Horvat’s scoring (and shooting) rates at 5-on-5. He actually scored goals at a slightly lower rate than his last two seasons, primarily scoring more goals because he stayed healthy and had a significant increase in ice time. His rate of primary assists was actually less than half of 2017-18 and, as a result, his point rate was the second-lowest of his career.

That’s not anything against Horvat. It’s impressive that he was able to produce the way he did while leading all Canucks forwards in ice time at 5-on-5 and playing nearly 21 minutes per game in all situations. It does suggest, however, that he’ll be hard-pressed to become a perpetual 30+ goalscorer and threat to tally 70-75 points.

The truth is that Horvat may have already reached his peak. Work on aging curves in the NHL suggests that players generally hit their peak a lot sooner than you might think, with players tending to peak or plateau between 22 and 25. There’s a possibility that Horvat has reached the limits of his ability to improve and will now be working to maintain his peak performance as long as possible.

That said, there are always outliers. It has been suggested many times in the past that expectations should be limited for Horvat and he has made a habit of exceeding such expectations. It’s hard to bet against Horvat at this point.

When you look at Horvat’s underlying statistics, he clearly pushes puck possession in the right direction and has a knack for creating scoring chances directly in front of the net when he’s on the ice at 5-on-5. 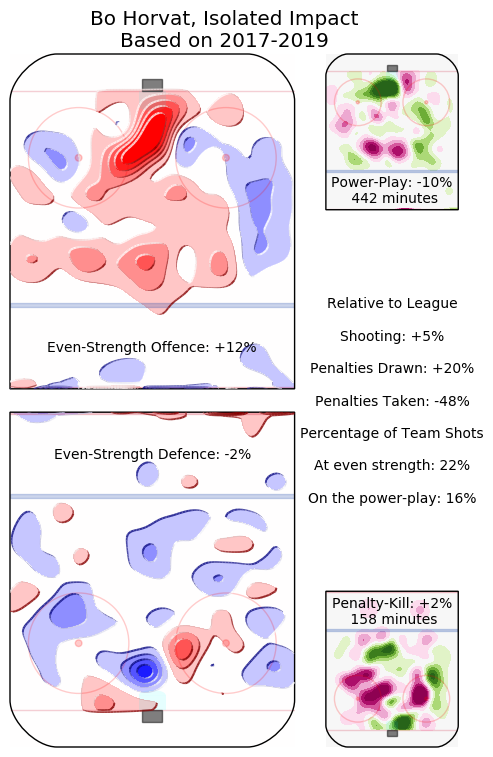 “Has Bo Horvat become the best player that Bo Horvat’s going to be?” asked Canucks head coach Travis Green at the end of the year. “I think he’s still capable of becoming a better hockey player, I don’t think he’s maxed out yet. And it doesn’t always involve goals and assists. I thought he took a step in our leadership group and that’s all positive for our group.”

Perhaps Horvat can take a step forward aside from points, but perhaps he still has more to give in terms of points as well. So, let’s look for some ways to be justifiably optimistic about Horvat next season.

One of them can be seen in the chart above: Horvat’s rate of primary assists. The fact that his assist rate dropped so precipitously last season suggests that there’s room for him to bounce back and pick up more assists next season.

The question is whether Horvat’s lack of assists is due to a change in how he played or some other factor. We can check that using the microstatistics tracked by Corey Sznajder. One of those microstats is shot assists, as in passes that lead directly to shots. 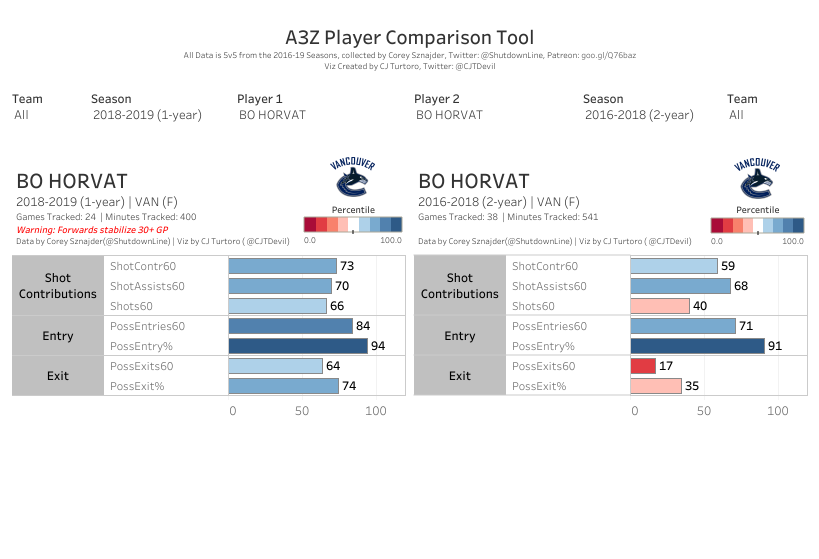 So, why did those shot assists not lead to as many actual assists? One reason might be the linemates that Horvat had last season.

That rotating cast of linemates likely made it difficult for Horvat to establish chemistry on his line. One of his most effective linemates was Antoine Roussel, but they weren’t consistently put together on a line until February and finished the season with just 268 minutes together at 5-on-5.

This coming season, however, the Canucks have a wealth of middle-six wingers, from which they’re hoping a true first-line threat can emerge. The upshot is that Horvat should get two solid wingers out of the deal.

That could mean Tanner Pearson, with whom Horvat had some solid chemistry to finish the season. Pearson had 7 goals at even-strength in 19 games with the Canucks; Horvat assisted on 5 of them.

If Sven Baertschi can stay healthy, he would also be a good fit alongside Horvat, as they’ve shown plenty of chemistry in the past, but there’s also Micheal Ferland, Josh Leivo, Jake Virtanen, Nikolay Goldobin, and possibly J.T. Miller if he doesn’t work out on the top line with Pettersson and Boeser. Eventually, Roussel will return from injury and could reunite with Horvat as well.

Hopefully that doesn’t mean a rotating cast of wingers for Horvat, but a solid duo or trio that can stick together for a significant period of time and develop some chemistry.

Let’s say that Horvat starts the season with Pearson and Ferland on his wings. Both have had 20-goal seasons, even if those seasons are less recent than we might like. If they can more regularly convert on Horvat’s shot assists, that should lead to a spike in assists for Horvat, which should also elevate his total points. 70 points doesn’t seem entirely unreasonable with that in mind.

Finally, there’s the power play, where Horvat was a consistent presence on the first unit last season. That’s likely to continue, as Horvat found a home as the forward down low or in front of the net. While Horvat’s goal-scoring rate on the power play dropped last season, he had a lot more assists.

The Canucks are hopeful that the addition of Quinn Hughes to the lineup will help boost their 22nd-ranked power play. Whether he immediately gets a chance on the first power play unit remains to be seen given that the incumbent Alex Edler is still in the lineup, but perhaps we’ll see a quick adjustment like we saw when Brock Boeser was moved to the first unit in his rookie year.

In case of injuries, there’s also the addition of Tyler Myers, who had historically been strong on the power play.

Combine that with an assortment of wingers that could find a place as the fourth forward on the power play — Miller, Ferland, Baertschi, or Pearson — and it’s entirely possible the Canucks’ power play takes a step forward next season. That could mean more points on the power play for Horvat and again makes 30 goals and 70 points seem attainable.

All told, perhaps it’s not unreasonable to expect Horvat to take another step forward. 30 goals and 70 points seem attainable and the improved linemates and power play could play a big role.