Vasili Podkolzin for Russia, Nils Höglander for Sweden, Toni Utunen for Finland, and Karel Plášek
Dec 25, 2019 6:30 AM By: Daniel Wagner 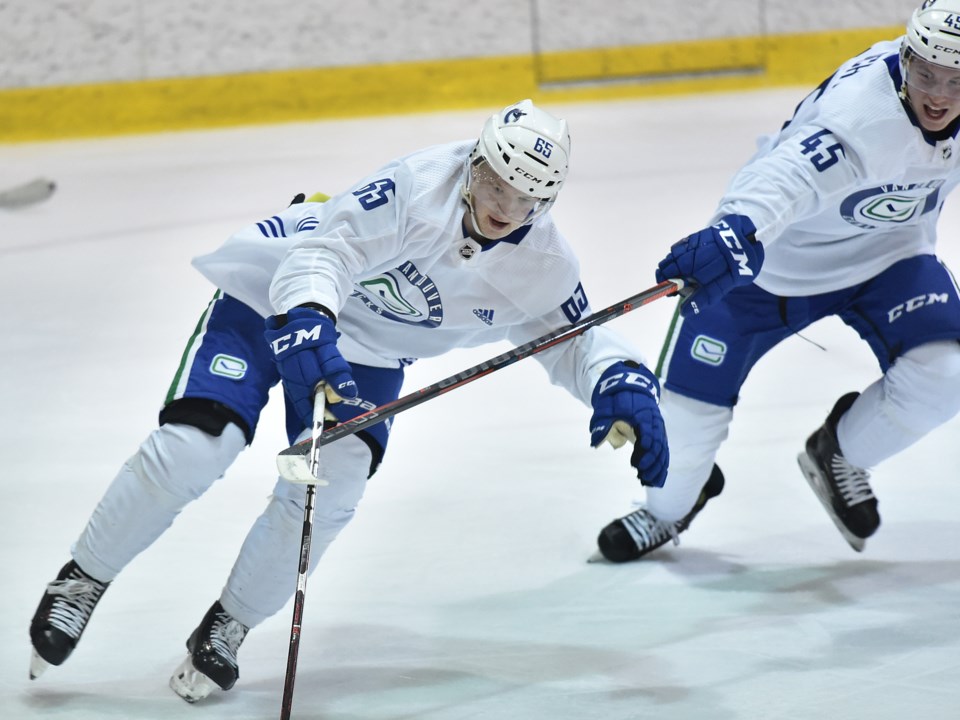 It’s Christmas. You probably shouldn’t be reading a hockey article right now, but let’s face it: sometimes you need a break at Christmastime, where you can hide out in the bathroom with your phone and take some time to yourself.

I appreciate you spending that precious me-time reading Pass it to Bulis. It’s a good thing you did, too, because there’s an important event for hockey fans kicking off tomorrow: the 2020 World Junior Championship.

The tournament starts at 6 AM PST on Boxing Day with games between Switzerland/Kazakhstan and the Czech Republic/Russia, with marquee matchups between Sweden/Finland and Canada/USA taking place at 10 AM, all broadcast on TSN. Canucks fans will likely want to set the PVR for the early morning games, however, as two prospects will be playing at 6 AM. The Canucks will have four prospects at the tournament: Vasili Podkolzin for Russia, Nils Höglander for Sweden, Toni Utunen for Finland, and Karel Plášek for the Czech Republic.

The World Junior Championship is a great opportunity to catch these four in action, as it’s unlikely that Canucks fans have had many chances to watch them play this season. All four play overseas — the Canucks don’t have any prospects playing for Canada or Team USA with Jett Woo and Jack Malone left off their country’s rosters — so unless you make a habit of watching the VHL, SHL, Liiga, and Czech Extraliga, you haven’t seen much of them.

So, what can we expect from these four prospects? Let’s take a look at each player, with some help from a guy that has seen them play this season: Cam Robinson, the Managing Editor of Dobber Prospects and Director of Film Scouting for Elite Prospects.

The Canucks first-round pick in the 2019 draft played a significant role for Russia at the 2019 World Juniors as an 18 year old, so you can bet he’ll play an even bigger role this year as a 19 year old.

David St-Louis at EP Rinkside suggested that Podkolzin “should be the motor of the Russian machine,” thanks to his intense work ethic and ability to control and protect the puck.

“Podkolzin is playing on what amounts to line two but you could call it line one,” said Robinson. “Russia has been splitting the power plays with Podkolzin running the point on one unit. He’ll kill penalties and be a beast in all situations for them.”

When and where to watch Podkolzin:

Höglander has stirred some excitement in Canucks fans thanks to the highlights that have made their way over from the SHL, particularly his incredible lacrosse goal — or, as the Swedes call it, a Zorro goal — from a couple months ago.

With his creative skillset and high motor, he’ll be a key player after he was a late cut for Sweden last year. That proved costly; they could have used some more offensive skill when they got shutout by Switzerland in the quarterfinals.

“Höglander will be the guy for the Swedes,” said Robinson. “He’s on line one with [Samuel] Fagemo, top power play. I expect a big tourney and a ton of minutes for him. This should be a coming out party, maybe to the degree that [Emil] Bemström did last year.”

Bemström led Sweden at the 2019 World Juniors with 4 goals and 6 points in 5 games. He’s made the jump this year to the NHL, with 9 points in 28 games so far for the Columbus Blue Jackets.

When and where to watch Höglander:

While you shouldn’t expect much offence out of Utunen, his steady defensive play will be key for Finland. He played in last year’s tournament as an 18 year old and took on more and more responsibility as the tournament progressed, until he was on the top pairing by the final game, playing 21:57 on a pairing with Henri Jokiharju against Team USA and winning the gold medal.

“Utunen has been skating on the team’s third pair but they’ll still see 17ish minutes a night,” said Robinson. “He’ll kill penalties. He’s wearing an A, he’s a leader for the group. And don’t be surprised if you see him pick a spot to jump every now and again. He has the ability just chooses not to use it often.”

Fans of Team Canada will certainly recall that, as Utunen ended Canada’s World Junior tournament last year. He scored the overtime game winner when he jumped up in the play and beat Michael DiPietro, knocking out Canada in the quarterfinals. It was his only point of the tournament.

When and where to watch Utunen:

The Czech Republic had a decent World Junior tournament last year, finishing third in their group behind the powerhouse Russian and Canadian teams. It was largely on the back of superb goaltending from Lukáš Dostál, who is returning in this year’s tournament and will once again be relied upon heavily.

Also returning from last year’s team is Karel Plášek, who the Canucks selected in the sixth round of the 2019 draft. Plášek recorded just one point in last year’s tournament, but could make a bit more noise as a 19 year old this year.

“Plášek is going to move around the lineup,” said Robinson. “I see him as living in the middle-six though. He’s spun on the left and right side in pre-tourney games on lines two and three. Probably see a bit of power play time.”

Robinson suggested that Plášek is unlikely to create “real production” unless he clicks with a talented teammate like Jan Jeník, who has ripped up the OHL this season and is a key player for the Czech Republic.

“The Czechs are in tough in that B group,” warned Robinson. Just like last year, they have Canada and Russia in their group, but to make matters worse, they’ll also face Team USA and a German team that is looking to create a few upsets with high-end skill like Dominik Bokk, Moritz Seider, Justin Schütz, and potential 2020 top-ten pick Tim Stützle.

That's particularly tough since the tournament is being hosted in the Czech Republic. Hoping to put on a show for their home fans, the Czech Republic might be in tough to even make it out of the round robin stage.

When and where to watch Plášek: