Who could be this pre-season’s Sergei Shirokov?

One of the fun elements of the pre-season is seeing an unexpected player surge into the spotlight.
Sep 7, 2017 2:58 PM By: Daniel Wagner 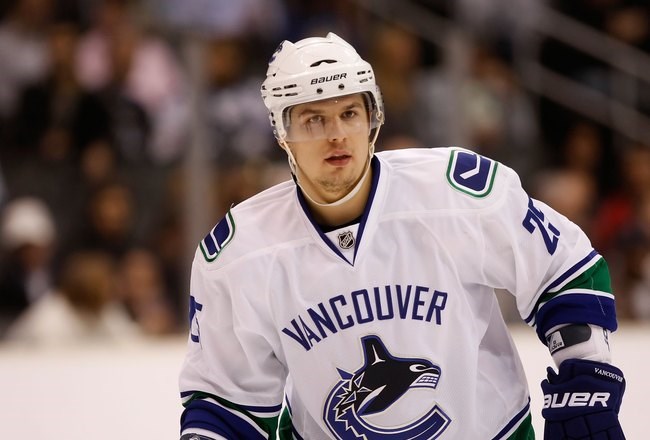 One of the fun elements of the pre-season is seeing an unexpected player surge into the spotlight. Last season, Troy Stecher captured everyone’s attention with a stunning performance in his first pre-season game, scoring a goal and adding two pretty assists in front of the hometown crowd.

But sometimes a player flashes brilliance in the pre-season, then all but disappears once the regular season begins.

The platonic ideal of this type of player for Canucks fans is Sergei Shirokov, who led the Canucks in scoring in the 2009 pre-season with seven points in four games. For that one brief, shining moment, Shirokov was the future of the franchise, a bonafide top-six scoring winger.

Then he played just 8 regular season games for the Canucks, scoring just one goal.

Shirokov isn’t the only Canucks prospect to shine in the pre-season, then fall short. Steve Kariya looked like a carbon copy of his older brother in the 1999 pre-season, leading the Canucks with 10 points in six games. Another younger brother, Fedor Fedorov, excelled in the 2002 pre-season, scoring four goals, but is now known more in Vancouver for being one-punched by Kevin Bieksa.

You could make the argument that Anton Rodin was the Shirokov of the 2016 pre-season, putting up five points in five games, then playing just three games during the regular season. Incredibly, he had such an impressive pre-season while still struggling with pain and discomfort in his surgically-repaired knee.

Rodin now has a chance to shake the Shirokov comparison this coming season, as doctors literally removed a bone from his knee and Rodin insists he’s now completely fine. Canucks fans might be buzzing about Rodin in the pre-season once again.

So, aside from Rodin, who are the candidates to be this year’s Sergei Shirokov? Which player is most likely to surprise everyone in the pre-season, then fade away once the regular season begins? Ideally, of course, each of these players would excel in the pre-season and then go on to long careers with the Canucks, but these four forwards could wind up on the Shirokov train instead.

The Canucks signed MacEwen after an impressive over-age season in the QMJHL where he scored 31 goals and 74 points in 66 games. He’s got the size, speed, and shot to shine in the pre-season, but is a longshot to stick with the Canucks out of training camp.

The real reason he’s a Shirokov-type is that the scouting reports tend to agree: he tops out as an AHL player. He’s got size, but just having size isn’t enough in the NHL; you have to use that size effectively. He has speed, but his skating is still rough around the edges. He’s got a shot, but you need to be able to create time and space to use that shot in the NHL.

When the Canucks signed MacEwen, it was the second time they’ve signed Vitali Abramov’s linemate from the Gatineau Olympiques. The first time it was Yan-Pavel Laplante, who might not even be an AHL player. The concern is that MacEwen’s boosted numbers in his over-age season came from playing with the talented Abramov, who was selected immediately after the Canucks picked Will Lockwood in the 2016 draft.

MacEwen could still develop into an NHL winger, but there’s definitely a distinct possibility that he’s the next Sergei Shirokov instead.

With 17 goals and 37 points in 112 NHL games, Boucher has already had a better career than some of the aforementioned players. The issue is that Boucher is on the edge of becoming the next Jason Krog: an AHL star who can’t quite keep up to the pace of the NHL. There’s a reason he was waived three times last season.

Boucher’s skillset could make him a decent middle-six winger, with utility on the power play, and it could lead to a lights out performance in the pre-season. The question is whether he has enough of a two-way game to stay in the lineup or whether he can put up enough points to justify lacking a two-way game.

There is no doubt that Goldobin has NHL skill; the question is whether he can play well enough defensively for an NHL coach to keep him in the lineup. Goldobin is a prime candidate to rip up the pre-season — he’s had good pre-seasons for the San Jose Sharks in the past — but it’s going to be tough for him to crack the Canucks lineup with the signing of Thomas Vanek and the ascent of Brock Boeser.

Canucks fans saw it last year: while he has a talent for scoring goals, his coach, Willie Desjardins, gave him ample time on the bench. You might disagree with how he was treated, but Goldobin could end up in a similar predicament in the coming season.

There is a lot less structure in the NHL pre-season, which is where someone with impressive physical talents can excel even if he might lack the hockey IQ to do so in the regular season. That brings us to Jake Virtanen, who has blazing speed and a rocket of a shot, but multiple questions about how he thinks the game.

There are a wide range of outcomes for Virtanen: he could blossom into the second-line power forward the Canucks envisioned when they drafted him; he could round out into a capable bottom-six winger; or he could fail to make the Canucks out of camp, languish with another low-scoring season with the Utica Comets, and never make the jump to the NHL.

There’s still plenty of hope for Virtanen to succeed and he’ll be given plenty of rope by the Canucks, as they don’t want their investment in him to go to waste, but his development since his rookie season hasn’t been promising.