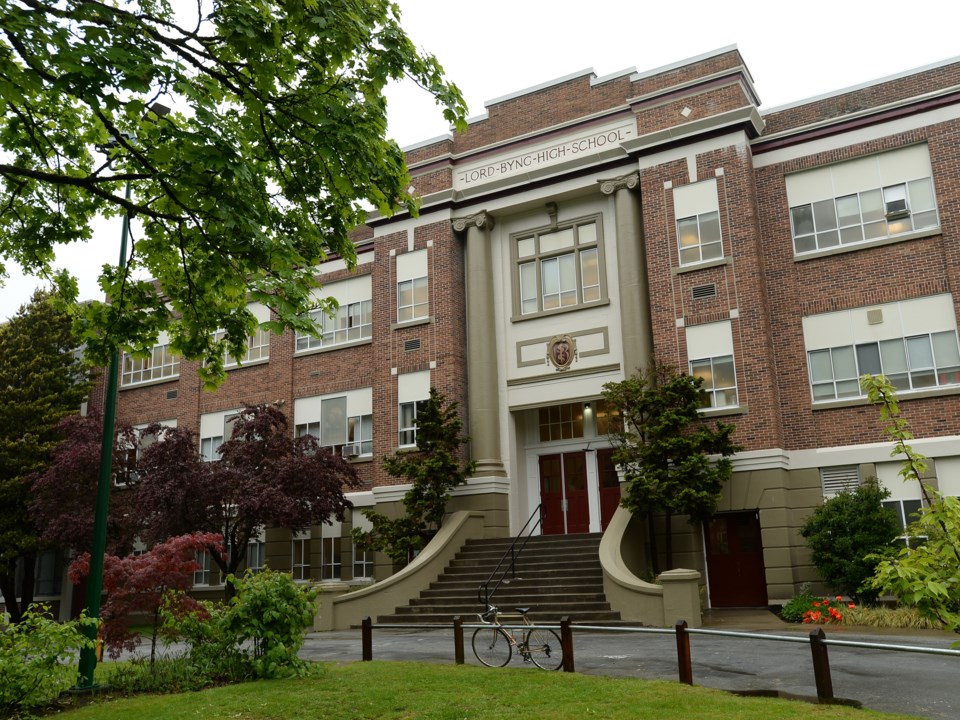 A Lord Byng high school student created a video two years ago in which he made racist comments against the black community and threatened to harm people. Photo Dan Toulgoet

Vancouver police are now explaining why the department chose not to recommend criminal charges against a Lord Byng high school student who produced a video in which he made racist comments against the black community and threatened to harm people.

The case dates back to November 2018 when the student, whose age was not revealed, created a video that was shared via Snapchat, a multi-media messaging app popular with teens.

The student could be seen and heard on the video “expressing racist comments against the black community, as well as a desire to harm members of the black community,” according to a police report that goes before the Vancouver Police Board Thursday.

The report said threats were not directed towards any named member or members of the black community, which represents less than one per cent of Vancouver’s population.

Police launched a criminal investigation but decided not to recommend charges to Crown counsel. Instead, the student had to write a letter of apology “and he offered to meet with the offended individuals, as well as a self-imposed education plan,” the report said.

The Courier contacted the school board Wednesday via its communications email address to provide more details on the case. No response was given at deadline.

Police said the decision not to recommend charges was based on the Youth Criminal Justice Act’s guiding principles on the use of “extra-judicial measures.”

“The YCJA was enacted on a platform of trying to keep youth out of the criminal justice system, where extra-judicial measures are available and appropriate,” the report said.

“In this case, sanctions were available under the policies and procedures of the VSB, and were imposed accordingly.”

Police said the student had no prior incidents with law enforcement or the school administration. He was described as “an exemplary student and was immediately remorseful and apologetic for his mistake, albeit once the video came to light,” the report said.

The video was brought to the attention of school administration by a parent shortly after it was shared. The administration then notified the school’s police liaison officer.

“While the content of the video was indeed inappropriate, racist in nature and contained threatening language, the investigation revealed there was no intent to commit harm,” the report said.

“That does not mean what the youth did was not wrong and deserved to be taken seriously, with sanctions imposed. This was done via the options available under VSB policies and protocols.”

The police report was in response to a complaint lodged in August 2019 by the B.C. Community Alliance, a local organization dedicated to fighting racism, particularly anti-black racism.

The group questioned the department’s rationale for not recommending charges against the creator of the video. The complaint was filed with the Office of the Police Complaint Commissioner.

“The B.C. Community Alliance feels that this is a ‘red flag’ and could lead to more serious issues if nothing is done to deter further escalating behaviour,” the commissioner’s office said in a letter that accompanies the police report.

The Vancouver Police Board will vote Thursday on a recommendation to conclude its review of the complaint based on the information outlined in the report.

Meanwhile, the school board voted in December 2019 to direct superintendent Suzanne Hoffman to create a strategic plan with actions the district will take to address racism and discrimination in Vancouver schools.

An interim report is scheduled to be presented at the June 3 meeting of the board’s policy and governance committee meeting, according to minutes of the Dec. 4, 2019 board meeting.

The Courier reported in June 2019 that hate crimes and hate crime incidents increased from 61 in 2016 to 141 in 2018 in Vancouver, with police saying the most common type investigated related to graffiti, harassment, assaults and suspicious circumstances.

The most targeted populations were Jewish, Muslim, LGBTQ2S+, Asian and black people, according to the VPD’s hate crimes investigator, Det. Const. Jacquie Abbott, who pointed out hate crimes are significantly underreported.

Abbott made those comments during a police board meeting at the Jewish Community Centre, where the audience heard that Jewish people are consistently targeted more for hate crimes than any other group in the city.

That reality has caused the Jewish community to implement a serious of security measures at its community centre and other sites in Vancouver, including installing blast film on windows.