Smoke and other particulate matter levels higher than usual for this time of year in Horseshoe Bay
Jun 25, 2019 3:27 PM By: John Kurucz 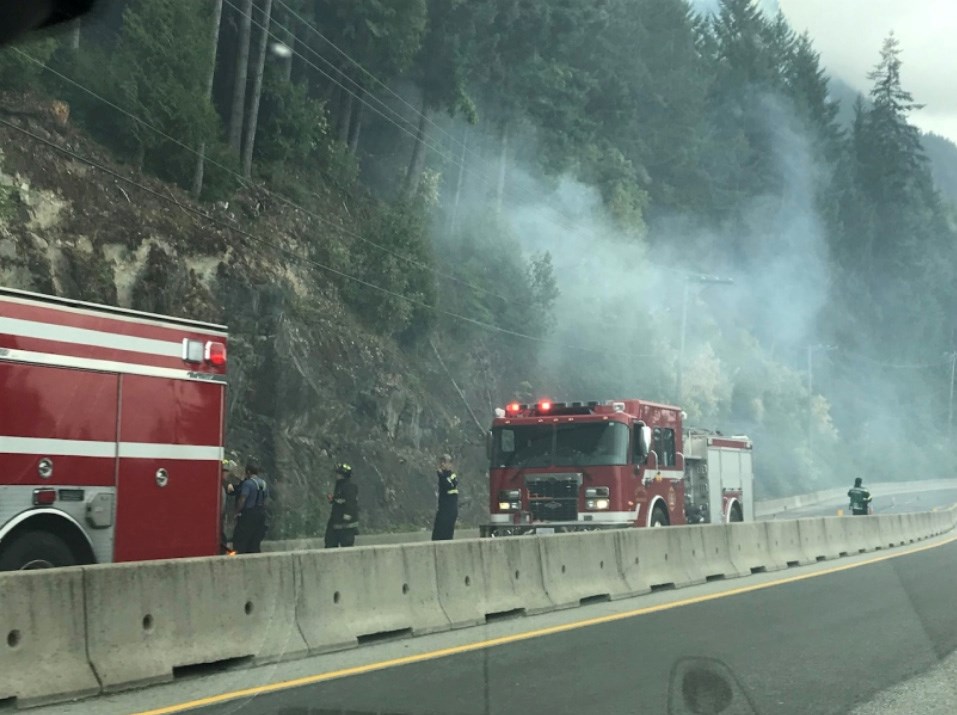 Some of the smoke near the Lions Bay fire that started June 23.Keili Bartlett/Squamish Chief

That horrible smell we’ve become accustomed to on the south coast is back.

Wildfire smoke from the Strip Creek fire near Lions Bay has made its way into Vancouver and surrounding areas, Metro Vancouver staff confirmed to the Courier Tuesday afternoon.

“The levels that we're seeing at our monitoring stations are well below our advisory levels,” said Francis Ries, a senior project engineer with Metro Vancouver. “We’re not contemplating an advisory at this time, but we are aware the smoke is there and we’re going to continue to monitor.”

Several people on social media were reporting the smell of smoke throughout Tuesday afternoon from virtually all corners of the city.

Does anyone else smell smoke in Vancouver right now? #yvr

Anyone know where this smoke in the vancouver sky is coming from?#new1130

Anyone else smell smoke? @CityofVancouver #Vancouver I'm in South Granville area... is this forest fires already?

Smell of #wildfire smoke in #Vancouver today.... summer must be here.

Smell of smoke in Vancouver.

And so it begins! :mask:#BCWildfires @BCGovFireInfo #BCwildfire

Ries said smoke and other particulate matter levels are higher than usual for this time of year at Horseshoe Bay, due to its close proximity to Lions Bay. Ries, however, didn’t advise against commuters riding their bikes or engaging in physical activity Tuesday evening.

“I think people need to let their senses be their guide in that respect,” he said. “If somebody is feeling like it’s quite smoky and they’re concerned about the level where they are, it is probably best for them to take some precaution in terms of avoiding strenuous exercise.”

The Strip Creek wildfire was reported in the early morning hours of Sunday and had been largely contained by Tuesday afternoon.

Lanes on the Sea to Sky highway north of Horseshoe Bay will remain closed for several more days to allow for the removal of hazardous trees after a “human-caused” wildfire in the area.

Five days’ worth of rain is expected in varying amounts from Wednesday, June 26 through until Sunday, June 30.

It may be enough to wash most of the current haze away, but the long-term forecast is iffy at best.

“The longer term prospect for the summer depends on getting on us significant rain and certainly if things remain as dry as they have been, even a little bit of rain in the longer run won’t lessen the fire risks,” Ries said. “We are, relatively speaking at this point, so dry and we’re seeing these local ignitions already, so I think it will not be surprising if we see more of this. In the short term though, help may be on the way over the next few days with the rain.”

Some smoke from the Strip Creek wildfire south of Lions Bay has reached western portions of Metro Vancouver. Air quality levels remain below advisory thresholds however concentrations may vary as winds and wildfire behaviour changes. https://t.co/qyfTAdCeW5

More information regarding air quality will be available online at metrovancouver.org.