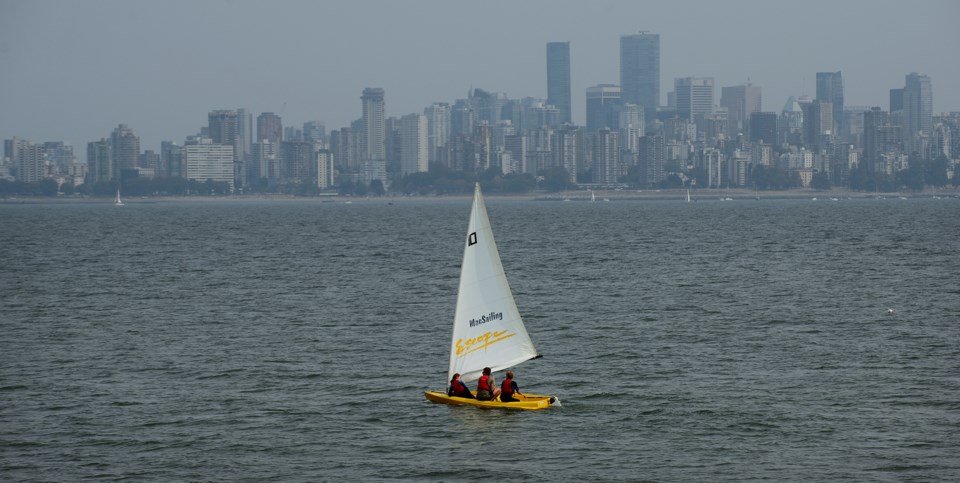 This photo was taken at Spanish Banks on Aug. 13, the first day of an extended air quality advisory issued by Metro Vancouver. The advisory has since been lifted and local hospitals have seen little in the way of an uptick in patients affected by the prolonged smoke cover.

The science of assessing wildfire smoke is a fairly straightforward exercise, as particulate matter readings are updated almost hourly and the amount of fires burning are recorded daily.

What the fires are doing to human health, however, doesn’t appear to be so cut and dry.

For starters, Vancouver Coastal Health doesn’t even track those specific numbers. Spokesperson Tiffany Akins said the data that’s kept is based on symptoms like a tight chest or coughing.

While there has been anecdotal chatter that those symptoms are being reported, linking them directly to the wildfire smoke can’t be done across the board.

“Generally, we haven’t been seeing a substantial increase in respiratory patients through our emergency departments, except for increased calls and concerns to the Lung Clinic at St Paul’s Hospital, from people with serious respiratory illnesses such as [chronic obstructive pulmonary disease],” Akins said in an email to the Courier.

Conditions Tuesday and over the previous weekend were markedly better than the hellish conditions seen for the majority of August. The 11-day, record-setting air quality advisory ended Aug. 24 but was again issued two days later.

Once put back in place on Aug. 26, it represented the 19th day of the year in which air quality advisories were in place, tying the record set last year. The province has experienced more than 2,000 fires since April, a threshold that’s only been broken twice since 2007. More than 970,000 hectares of land have burned, making 2018 worst season the worst on record.

Only in cases where asthma or underlying pulmonary or cardiovascular problems exist will pet owners need to exercise caution. The symptoms to be mindful of include sneezing, irritation around the eyes and nose, restlessness or discharge coming from the eyes.

“In cases like these, we will have patients that are already diagnosed or they are borderline, so they will now become clinical and require medication,” said Dr. Marius Vasilescu of the Vancouver Animal Wellness Hospital. “Unless there’s a fire nearby, we won’t see severe cases of smoke toxicity.”

Vancouver Animal Emergency & Referral Centre manager Avery Gillick lives near Yaletown and saw a noticeable decrease in the amount of dogs being walked in his neighbourhood throughout August. Breeds such as English bulldogs or pugs are particularly at risk because of their shorter noses and palettes.

Should extended periods of heat return before summer’s done, Gillick recommends the following:

“Make sure you keep your dog inside when possible, bring a spray bottle on walks, and walk your dog in the early morning or evening,” he said.