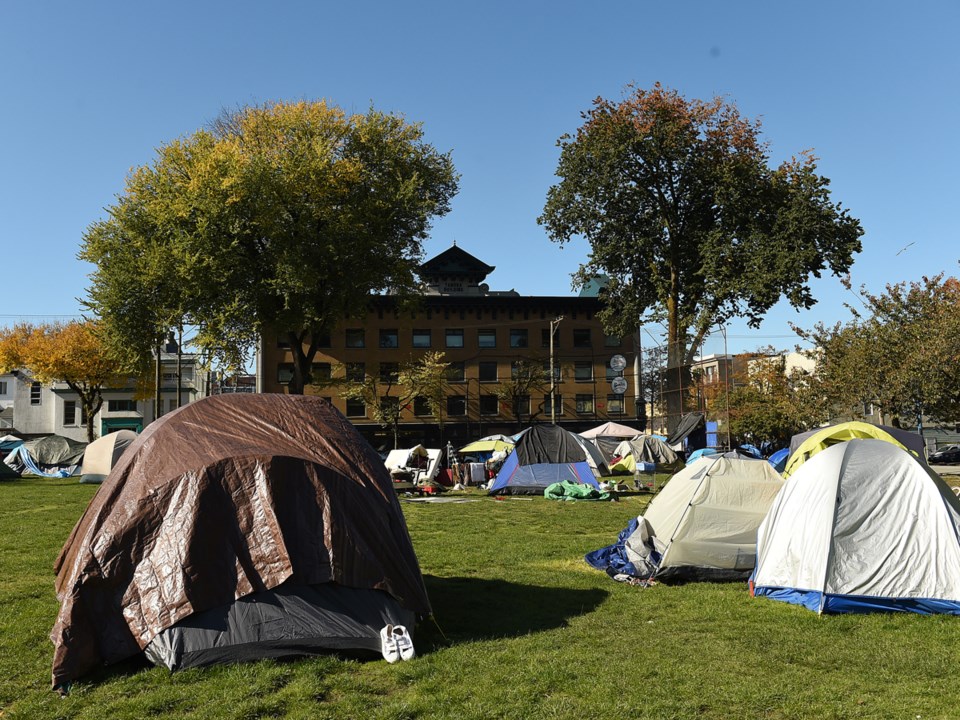 The motion requests city staff work with the park board to consider adding a community kitchen, laundry, clothes drying spaces and 24-hour sanitation facilities with running water “near Oppenheimer Park.”

Oppenheimer residents already have their own unsanctioned drug injection site and campers recently built a “church” in a tarp-covered shelter large enough to store a car.

The park board also added portable toilets to the encampment, which reached its one-year anniversary this month, despite 130 people having accepted housing offers in August.

Deputy city manager Paul Mochrie made it clear at a September park board meeting that city staff doesn’t want to be responsible for managing a permanent encampment.

But in a telephone interview Thursday, Mochrie acknowledged there are elements of council’s motion that would support people living in the park and contribute to the tent city becoming permanent.

“That’s certainly a potential implication of this,” he said, noting he understands the intent of council’s motion to provide immediate services for the campers.

“Council’s looking at ways to support people while they’re there, so we’re going to have to figure out what that looks like. But at this stage, my assumption is we’re going to be there for a while.”

Council did not request a court injunction be sought to clear Oppenheimer, despite the support of the Vancouver Police Department, which has cited concerns about crime and public safety at the park.

At the same time, council’s motion suggested Mayor Kennedy Stewart and city staff were not working “aggressively” enough to pursue land and funding for modular housing, as well as shelter spaces for the winter.

“I don’t want to trash the mayor or the city staff, but the thing is we’ve got to bump up the pressure because it’s not acceptable that homelessness is growing,” said COPE Coun. Jean Swanson, who was responsible for adding the amendments to the motion about the mayor and staff.

Vancouver’s homeless population was recorded in March at 2,223 people. Estimates vary on the number of people living in Oppenheimer, with 50 identified by city staff and up to 150 per night counted by campers at the park.

Swanson’s amendments request the mayor and staff “engage in a more coordinated approach” with provincial ministers and staff to work “aggressively” to pursue land and funding for modular housing.

She also asked the mayor and city staff be aggressive in seeking shelter space this winter for more than 600 people, which was the number of people counted as unsheltered in the March homeless count.

Swanson acknowledged Stewart has lobbied senior levels of government for more money for housing, and that city staff have worked overtime with other agencies to find housing for people living in Oppenheimer.

But, she said, the need for more help on the housing front is bolstered by the full council putting senior levels of government on notice that Vancouver’s growing homeless population is unacceptable.

B.C. Housing — the housing arm of the provincial government — said in an emailed statement Thursday that it continues to work with the city and park board to “develop short and long-term solutions” for people camping at Oppenheimer and elsewhere in the Downtown Eastside.

“However, as appropriate units turn over, B.C. Housing continues to offer those spaces to people in Vancouver who are experiencing homelessness, including those camping at Oppenheimer Park. We are working with our partners to create more housing options as soon as possible.”

Those options include finding and opening additional shelter spaces for colder months.

“We recognize that shelters are not long-term solutions, and we know there is an immediate need for more supportive homes in Vancouver,” the statement said.

The direction of council Wednesday was in contrast to park board management’s request this summer to order people out of Oppenheimer — which failed — and to seek a court injunction to clear the park, which was rejected by park board commissioners.

Concerns about crime and the safety of campers and staff working in the park, including police officers and firefighters, have been cited by the police department and city management since the summer.

In September, the mayor, who was absent for Wednesday’s vote, requested temporary jurisdiction of Oppenheimer from the park board to execute a plan that could include an injunction, although Stewart has only said “all options are on the table.”

The park board rejected the mayor’s request for temporary jurisdiction, with park board chairperson Stuart Mackinnon calling instead for a multi-jurisdictional task force to address homelessness across Vancouver.

Green Party Coun. Michael Wiebe, who tabled Wednesday’s motion, said an injunction is “one spoke” in a comprehensive plan that he wants city staff to develop and present to park board for approval.

“The long-term plan will be to clear the park — that is the final goal,” said Wiebe, who served as a park board commissioner before being elected last year to council.

“Our goal is that next summer, hopefully, we have a park that’s functional. We bring back the positive programming the park board has done, with dinners in the park and dancing in the park — and really trying to make neighbours feel connected.”

But Wiebe stressed there is an immediate need to get homeless people — in all parks — the services they need, whether that be housing, treatment services or employment, or all three.

“Those services are needed to give people a leg up, so they can get out of Oppenheimer,” Wiebe said. “When you talk to the people we moved into housing, most of those people didn’t come back to the park — they were excited to get housing.”

NPA Coun. Lisa Dominato said she disagreed with the notion that council is allowing the tent city to operate indefinitely, noting the series of measures requested Wednesday aim to connect Oppenheimer campers with housing, treatment services and employment.

“It signals to the province and to the federal government that we need help, and we have to work together on solutions,” said Dominato, noting she and other councillors have met with provincial ministers about the Oppenheimer tent city.

The motion also calls on the provincial government to build into its next budget the need to fund and expand mental health services, treatment and social assistance, as well as housing.