Wishing upon a star with Vancouver's Keegan Connor Tracy

In Keegan Connor Tracy's world, magic is not merely the stuff of fairytales. The last two years have been exceptionally magical for the Vancouver-based actress.
Dec 11, 2012 9:00 PM By: Vancouver Courier Staff 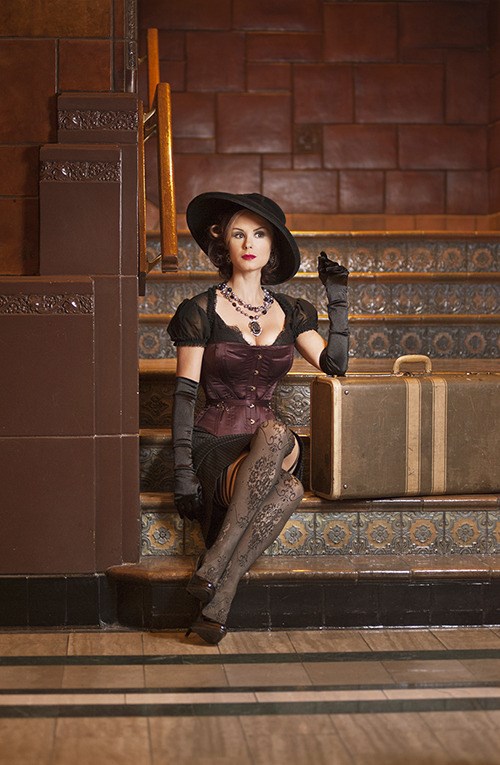 In Keegan Connor Tracy's world, magic is not merely the stuff of fairytales.

The last two years have been exceptionally magical for the Vancouver-based actress. First Tracy snagged the plum role of the Blue Fairy on ABC's hit fantasy series, Once Upon a Time, a dream gig in which her spirited character regularly squares off against the wicked Rumplestiltskin, masterfully portrayed by Scottish actor Robert Carlyle (The Full Monty). Shortly thereafter, she was handpicked by icon Robert Redford to appear in his political action thriller The Company You Keep, currently snapping up awards and acclaim on the festival circuit. Now the seemingly ageless actress is gearing up for yet another high-profile role: that of Miss Watson, Norman Bates' language arts teacher, on Bates Motel, A&E's upcoming Psycho prequel set to premiere in early 2013.

And Tracy has made all of these career strides while simultaneously immersed in the role of a lifetime: the mother to two young daughters under the age of four.

"Magic still exists at our house," said Tracy during a recent interview in a Vancouver pub. "[My older daughter] is fascinated that when the Tooth Fairy comes in the night, she leaves a little letter saying, 'please say hi to my friend the Blue Fairy.'"

It's not only magic that has led to this shining moment in Tracy's career. The Ontario native has been working steadily in film and television for 17 years, with roles in films like 40 Days and 40 Nights and Final Destination 2 and TV shows like Battlestar Galactica, Jake 2.0 and Beggars and Choosers under her belt.

But the Blue Fairy (and her counterpart, Mother Superior) has changed everything for Tracy, and fans might be surprised to discover how grueling and non-magical the work can be. To date, much of Tracy's Blue Fairy work has been shot against a green screen, involving complicated harness work that finds her floating 30 or 40 feet off the ground for hours at a time, with an inanimate object usually standing in for co-stars such as Carlyle and Ginnifer Goodwin (Snow White).

"It's usually a piece of tape or a water bottle or sometimes the script supervisor has been a stand-in because I really like to have eyeballs to look into," said Tracy. "Over the course of a long, long day [the harness] can get painful."

Physical challenges aside, her fairy-dust-wielding alter ego is a source of ongoing delight for Tracy — even though the powerful being is far from the goofy and quirky fairy Tracy had expected to play at the outset. "When I got to say the thing about the curse in the Pinocchio episode, 'after 28 years she's going to come back and save us all,' I couldn't believe that I got to say that," said Tracy. "It's like when you get to say whatever the title of the movie is, and that's your line in the movie."

Once Upon a Time (now in its second season) has been a smash hit for ABC, and Tracy credits the shows success, in part, to the dreariness of modern life. "In this depressive recessionary time where people, A, can't afford to go out, and B, are really feeling the desperate heaviness of this time, you have this show," said Tracy. "They don't talk about the economy in Storybrooke [ably portrayed by Steveston, BC]. Its like the rest of the world doesn't exist, and I think that escapism is very timely."

While Tracy has plenty to share about Once Upon a Time, she can't divulge quite as much about the yet-to-air Bates Motel, which co-stars Freddie Highmore as a young Norman and Vera Farmiga as his mother. "I can say that I portray a teacher who's very influential," she said. "You're lucky if you have one of those come along, and I think that's what she's going to be for him."

When she's not acting with the likes of Redford ("You just cant help but be dazzled by him," she said) or engaged in full-blown mommy mode, Tracy can be found on Twitter (@keegolicious), tweeting about any number of her passions: fashion, literature, French, New York Times crossword puzzles, and mixed martial arts.

"[My interests are] certainly incongruous to some degree," she said with a laugh. "I love the idea that I can be a polyglot and a mixed martial arts fan and a fashionista and a damn good mother all in the same package, [because] you have to have varied interests, and I come by them honestly."

On a rainy afternoon in mid-November, the foyer of the Marine Building played host to a magical photo shoot with Blue-Fairy-turned-WE-cover-girl, Keegan Connor Tracy.

Dressed in a series of tightly cinched corsets from Lace Embrace Atelier and elaborate hats supplied by The Saucy Milliner, Tracy appeared perfectly at ease as she was photographed amongst the Burrard Street landmark's art deco fixtures — hardly surprising considering her long-held passion for fashion.

"I actually wore a feathered fascinator to my 8th grade graduation," said Tracy, who described her everyday look as bohemian chic.

"I love pulling together old and new. I have always tried to find something no one else would have."

Tracy is an avid fan of both Lace Embrace Atelier and The Saucy Milliner, two Vancouver designers who've created pieces for Once Upon a Time and who, says Tracy, whip up fashion magic for their customers.

"Anything bespoke has a magic that makes it yours," said Tracy. "I love supporting local artists who are stepping outside of this tendency we have to buy mass-produced, inexpensive pieces that don't last. These are investment pieces that you can savour over time. Its like slow food, but with fashion."

Once Upon a Time airs Sundays at 7pm on CTV.