With Thatcher Demko on the shelf, will Michael DiPietro get his second career start?

Michael DiPietro’s first career NHL start was a disaster, but it wasn’t really his fault. He was unexpectedly thrown into action because the Canucks ran out of goaltenders. Richard Bachman suffered an achilles tear and was out for the season.
Dec 13, 2019 4:36 PM By: Daniel Wagner 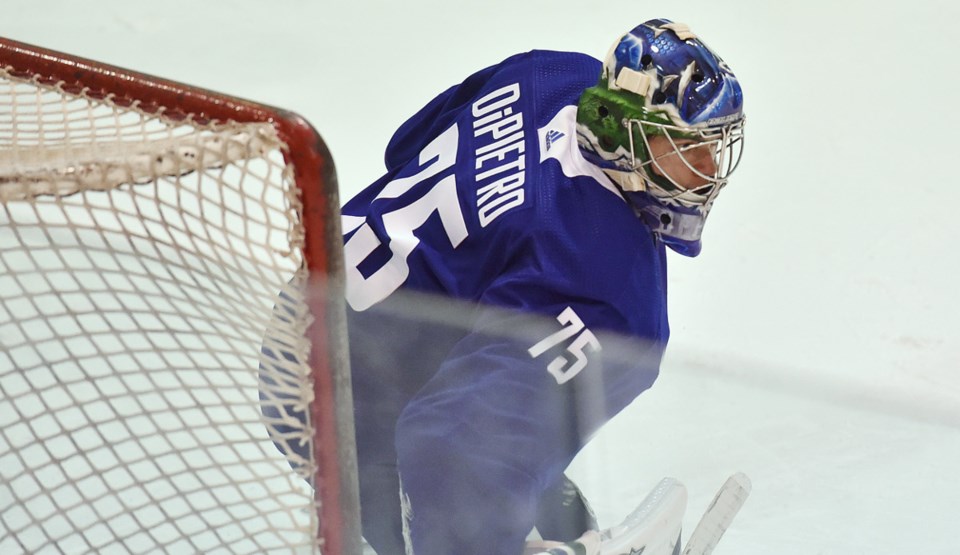 Michael DiPietro’s first career NHL start was a disaster, but it wasn’t really his fault. He was unexpectedly thrown into action because the Canucks ran out of goaltenders.

Richard Bachman suffered an achilles tear and was out for the season. The Canucks traded Anders Nilsson and the goaltender they got back in the trade, Mike McKenna, got claimed off waivers. Then Thatcher Demko got injured and DiPietro was called up from the OHL on an emergency basis. Finally, Jacob Markstrom experienced “lower body tightness” and couldn’t play, forcing the 19-year-old DiPietro into action.

It went about as poorly as it could go. DiPietro faced the Sharks, who were arguably the best team in the Western Conference at the time, and one of the highest-scoring teams in the NHL. As you might expect, the inexperienced DiPietro got lit up, giving up 7 goals on 24 shots. The worst part was, with Markstrom not available to play, there was no escape; the Canucks couldn’t pull DiPietro even if they wanted to.

Once again, Demko is injured, suffering a concussion during a recent practice. Once again, DiPietro has been called up to replace him.

DiPietro’s second start should be under more controlled circumstances. There’s no reason for him to be forced into a game before he’s ready. Even if Markstrom were to get injured, the Canucks have more goaltenders under contract. They called up DiPietro because he’s been the Utica Comets’ best goaltender this season, not because they had no other option.

DiPietro has outperformed Zane McIntyre in Utica this season, with a better save percentage and goals against average, earning more starts even though he missed games with an earlier call-up to the Canucks.

Among rookie goaltenders in the AHL, DiPietro has the second-best save percentage and second-best goals against average. He’s even been perfect in the shootout, albeit while facing just three shootout attempts.

Even if we look at more than just rookies, DiPietro is still above average in the AHL this season. The average save percentage among goaltenders that have played at least 8 games (the cutoff for the AHL’s stats site) is .906 and DiPietro’s .910 save percentage comes in ahead of that average. For a 20-year-old goaltender, that’s pretty impressive.

Is that enough to make the Canucks confident to throw him back into NHL action?

Since this is DiPietro’s second call-up this season, the team and their goaltending coaches have gotten a pretty good look at him in practice, which should be enough to assess whether he’s ready. If they think he is, the Canucks’ upcoming schedule gives the team some opportunities to put him in net.

The Canucks will be busy heading into Christmas, with 6 games in 10 nights, including back-to-backs this weekend. The first of those games offers an opportunity at a re-match for DiPietro, as the Canucks head to San Jose to face the Sharks on Saturday.

The Sharks aren’t quite the powerhouse they were last season, when they finished with the second-most points in the West. This season, they’re below the Canucks in the standings at 12th in the Western Conference and can’t keep the puck out of their own net, with the third-worst goals against per game in the NHL.

They’re also much less potent offensively, averaging 2.65 goals per game, 25th in the NHL. If the Canucks are going to put DiPietro in for one night of this weekend’s back-to-back games, the Sharks are the weaker opponent as compared to the Vegas Golden Knights on Sunday.

On the other hand, the Sharks just fired their head coach, Pete DeBoer, and sometimes that can spark a team.

That said, perhaps there’s no need to start DiPietro in one of the back-to-back games.

Back in 2013, work done by Eric Tulsky, currently the Vice President of Hockey Management and Strategy for the Carolina Hurricanes, found that there was, on average, a 1.1% drop in save percentage on the second night of back-to-backs: from .912 to .901.

That’s a significant drop, and one that suggests the backup goaltender should always start the second night of back-to-backs.

Luszczyszyn’s work uses a larger sample size than that of Tulsky back in 2013, producing a more reliable result. Essentially, if coaches are confident in their starting goaltender, they shouldn’t have any fear in putting them in on back-to-back nights.

The one time this season that Markstrom has started on back-to-back nights didn’t go particularly well, with Markstrom giving up 3 goals on 28 shots on the second night, but two of the three goals came on the power play to Leon Draisaitl. It’s fair to say there’s grace for a goaltender in that situation.

So, the Canucks should feel comfortable starting Markstrom in both games this weekend, particularly after his sterling 43-save shutout against the Hurricanes on Thursday. But what about next week? The Canucks have a cramped schedule and Markstrom performs at his best when he’s able to get some rest and extra work with goaltending coach Ian Clark.

The trouble is that there are no easy games next week. The Montreal Canadiens on Tuesday might be the best bet, but they’ve been a high-scoring team this season and are currently on a hot streak, with four wins in their last five games. The Canucks face the Golden Knights again on Thursday, then it’s the always-dangerous Pittsburgh Penguins on Saturday.

The final game before Christmas: a crucial Pacific Division matchup with the Edmonton Oilers.

Do any of those games make sense for DiPietro to get his second career start? If the Canucks feel confident enough that DiPietro is ready, then why not? But it wouldn’t exactly be easing him into action.

It will also depend on how long Demko is out. This isn’t Demko’s first concussion — he missed the first two months last season after suffering a concussion during training camp last season — and it behooves both Demko and the team to be careful with his recovery. As the team has seen this week with Micheal Ferland, there can be complications when it comes to concussions and post-concussion syndrome.