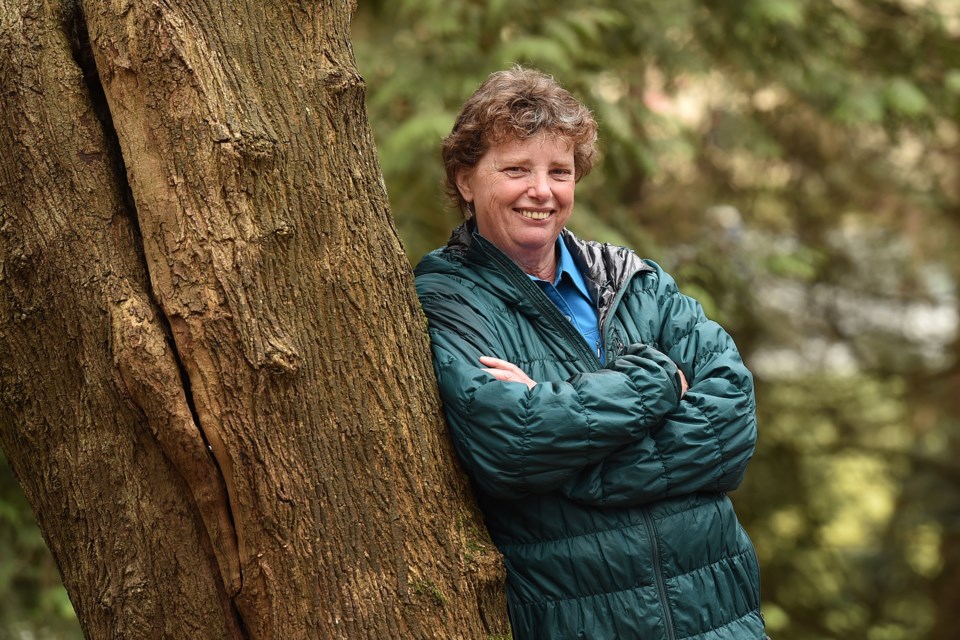 After years of unimaginable abuse as a child, Suzanne Venuta has finally made peace with the past and is on a journey to find herself once again. Photo Dan Toulgoet

Posing for a photograph while dressed in a pair of black jeans, blue golf shirt and green quilted jacket, Courage To Come Back recipient Suzanne Venuta jokes about her wardrobe choices for the upcoming Courage awards gala.

“I’d really like to wear my hiking boots,” says Venuta, flashing her trademark grin. “What if I bedazzle them?”

The fact Venuta can joke at all after the atrocities she faced growing up is testament to her inner strength. But Venuta makes it immediately clear she is so much more than the heinous sexual, emotional and physical abuse she suffered as a child, which as a woman led to depression, anxiety and complex post-traumatic stress disorder. Venuta was also eventually diagnosed with dissociative identity disorder (DID), formerly called multiple personality disorder, a coping mechanism she used as a child to survive her abuse.

“There are years of my life that I have no memory of but, growing up, I thought everyone had a shitty memory,” says Venuta, who admits to having a bit of a potty mouth. “Turns out disassociation was my drug of choice. It’s not like I have a million different characters, but more of a fractured persona.”

Venuta’s strength of character and survival instincts are just two of the reasons she’ll be awarded the 2018 award in the mental health category on May 10 at the Vancouver Convention Centre. The awards are presented by Coast Mental Health and chaired by Lorne Segal.

As a child and teenager living with an undiagnosed learning disability, Venuta simply assumed she wasn’t as smart as her fellow students and turned to alcohol at age 12 to numb the pain of being bullied throughout school.  She married young and moved to Ontario with her military husband but, when that marriage fell apart, Venuta found herself supporting her son on her own thousands of miles from home.

Moving back to the Comox Valley, Venuta enrolled in a two-year Early Childhood Education program and graduated on the Dean’s List — dispelling any questions about her intelligence.  She then opened two successful daycares but it wasn’t long before flashbacks, anxiety, post-traumatic stress, depression and a host of other mental health issues saw her “crash and burn” in 2000 and she lost everything. Venuta also wondered at the time if she was possibly suffering from early-onset dementia due to her sporadic memory.

“I’d forget to pay bills or forget to go shopping,” she says. “It wasn’t until I was diagnosed in 2003 with DID that things started to make sense.”

Venuta says until then her only experience with DID was from TV or movies, such as the 1957 film The Three Faces of Eve about a woman with multiple personalities.

“But once I was diagnosed I got it, and that’s when I joined a psychotherapy group,” says Venuta. “I also found out it’s not as rare as I thought, though some doctors are still reluctant to admit it exists.”

Putting a name to what Venuta was suffering from meant she was finally able to seek help and begin rebuilding her life. And rebuild she did. Today Venuta has remarried and has a close relationship with her adult son. She was also able to begin setting goals and challenging herself, something she previously would never allow herself to do because it seemed so pointless.

One of the first challenges Venuta tackled was signing up for an Outward Bound Canada program which, as part of its mandate, offers canoeing, rock climbing, kayaking, backpacking and dogsledding courses for military veterans, youth at risk, Indigenous peoples and women survivors of violence. That lit a spark in Venuta, which convinced her to attempt the North Coast Trail, considered one of the most challenging hikes in Canada.

“It taught me to dig down deep,” says Venuta.

With a new sense of confidence she’d never experienced before, Venuta continued to challenge herself and set new goals. She’s an accomplished dragon boat rower and three-time team captain, learned to skate at 40 and became a master ringette player, learned to golf, is an accomplished public speaker and offers peer support to participants of Outward Bound Women of Courage. Venuta also mentors youth and adults and works with doctors and interns to educate them about mental health, including dissociative identity disorder.

Venuta has come so far out of the black hole she once found herself drowning in, she now speaks to students about abuse and mental health.

Venuta also wants anyone struggling with mental health issues to hang in there and to persist in seeking help. A new goal she has is to one day take part in a TED talk. TED is a non-profit organization devoted to spreading ideas, usually in the form of short, powerful talks either live or by video.

“I want people suffering to know there is help and it can be a kind world,” says Venuta. “There is somebody out there who understands so keep asking. You’re worth it. There are times I still have shit days, but it really does get better.”

These days, Venuta is adding travel blogger to her resume and has planned a seven-week hiking/walking trip to Ireland for May 12, two days after the Courage to Come Back Awards dinner. And while Venuta will be joined by a friend for part of the trip, she'll be on her own for much of the time and is not the least bit concerned about travelling solo. Venuta feels a strong connection to Ireland, a place she calls “home of my ancestors.”

“It’s my ancestors who have given me the strength and resiliency to carry on and I planned this trip to honour them and me and my journey,” says Venuta, who plans to perform a ceremony for her ancestors in Ireland using a shaman’s pot and smudge. “I need to show my gratitude. I feel like this trip is kind of like salmon returning to the stream. I lost myself because of the trauma I went through but this trip will be my return to self.”

The Courage To Come Back awards dinner a major fundraiser for Coast Mental Health. More information and tickets to the May 10 awards ceremony are available at CourageToComeBack.ca.