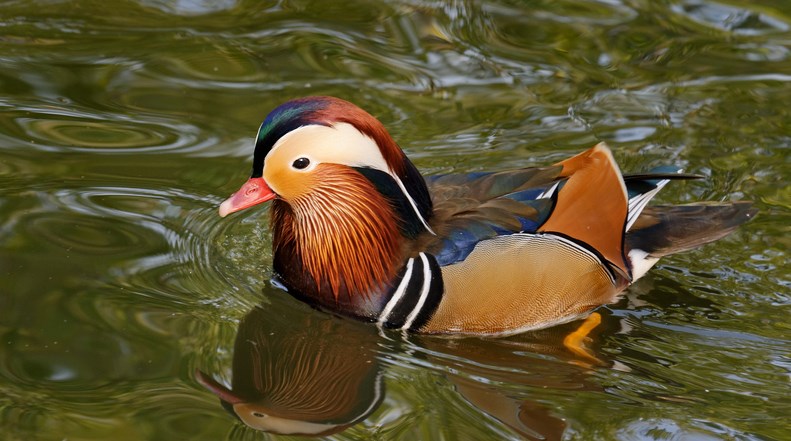 If you’ve spotted a colourful, exotic-looking duck that’s been hanging around Burnaby Lake recently, you might have done a double take.

The Mandarin Duck, as it's known, has been causing a stir in the media lately, and among birdwatchers, since it is not native to North America.

On October 31, a mandarin duck spotted in Central Park merited a New York Times article, and similarly this week in Vancouver, Global BC shared the word that at least one Mandarin Duck has been seen in the region, in Burnaby Lake as well as some reported sightings in Lost Lagoon in Vancouver’s Stanley Park.

“The mandarin, widely regarded as the world’s most beautiful duck, is a native of China and Japan,” explains the website Living with Birds. He’s a close relative of the North American wood duck–something Metro Vancouverites are very familiar with seeing in our local lakes and small waterways.

Similarly, the mandarin duck prefers small wooded ponds, which may explain where he (or they) have shown up in Burnaby Lake and Los Lagoon.

Meet the Mandarin duck, which is known as the most beautiful duck in the world and usually only found in East Asia. I spotted this beauty yesterday floating around Piper Spit on Burnaby Lake. What a rare find! He must have escaped captivity to be drifting through our waters. #explorebc #animals#naturelovers #bc

But how did the most beautiful bird in the world get to beautiful British Columbia? Just like with the Central Park duck in New York, we just don’t know.

We do know, however, that the mandarin duck has been here since around May, as confirmed by Burnaby Lake Park via their social media.

He has been around since May. The Burnaby Lake community has been very Canadian-like as we are with any unfeathered celebrity and not bothered him too much by keeping a respectful distance.

So bird lovers, take note, this rare duck is a sight to behold–but be respectful if you’re checking him out.