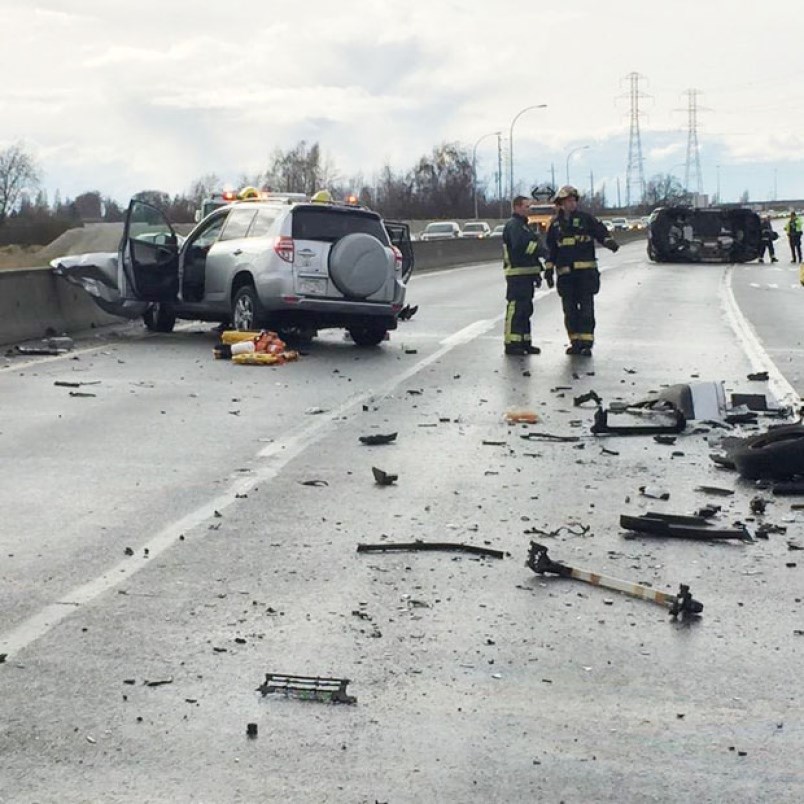 The man who caused a three-vehicle crash by driving the wrong way on Highway 99 last Sunday afternoon has succumbed to his injuries.Pat Heinekey

The man who caused a three-vehicle crash by driving the wrong way on Highway 99 last Sunday afternoon has succumbed to his injuries.

The BC Coroners Service confirmed the 26-year-old from Vancouver, who drove a Volkswagen Golf southbound in the northbound lanes, died in hospital.

“We are in the early stages of our investigation into his death,” said BC Coroners Service spokesperson Andy Watson. “Due to the privacy of the deceased per the Coroners Act and privacy legislation, we will not be releasing or confirming identity.”

On Monday, RCMP confirmed the driver of the Volkswagen, after exiting the George Massey Tunnel, crashed through the barriers in the counterflow lane and veered into oncoming traffic.

RCMP say they have not determined yet what might have prompted the driver to crash through the barriers.

“We have several theories but they are just that, theories, as we continue our investigation,” said Sgt. Lorne Lecker. “In this case we may never know exactly what happened.”

Several videos of the incident flooded social media Tuesday morning that showed the Volkswagen going the wrong way at a high rate of speed, narrowly missing vehicles that swerved to get out of the way.

Lecker said a passenger in the Toyota, a 19-year-old female, has been moved out of intensive care, but remains in hospital, while the driver, a 48-year-old from Surrey, suffered unknown injuries. The driver and passenger of a Honda Pilot also involved in the collision suffered minor injuries and were treated at the scene.

“We have received numerous videos and numerous witness statements,” said Lecker. “Many of the witness statements have also included videos taken of the vehicle going the wrong way on the highway as well as the actual collision. We thank citizens for the videos, but we want to remind the public that taking cell phone video puts them at risk and is illegal. A dashboard camera is great, and the videos we are getting have been an incredible asset, but no evidence is worth a second accident.”
Lecker said investigators have interviewed family members of the deceased driver and plan to interview them further.

The northbound lanes of Highway 99 were closed for a number of hours following the crash.

RCMP are asking any witnesses who have not already spoken to police to contact Deas Island Traffic Services at 778-290-2400 and note file number 2018-949.